Home » News » Microsoft Edge to Deliver Notifications Based on Its Own Perception of a Website – What Could Go Wrong?

Microsoft Edge to Deliver Notifications Based on Its Own Perception of a Website – What Could Go Wrong?

Starting from Microsoft Edge build 88, you will now start to receive quiet notifications or full notifications based on a predetermined score that Microsoft has collected regarding a website’s likelihood of offering you a notification that it thinks you will want.

The problems that arise from push notifications are yet to be solved, and it could well be that they won’t ever be solved and instead, they should just be avoided. But for the time being, you can expect to see a few attempts from the world’s leading web browsers to try to tame them, the most recent being from Microsoft. In Microsoft Edge, you will now find a toggle for Quiet notification requests. When you enable this toggle, you are agreeing to enable Microsoft’s rather complicated attempt at figuring out how people collectively feel about a website. And then you can expect notifications from the sites that most people do not have positive feelings toward to be arriving at your browser silently, that is to say with a small icon in the browser address bar that aims to give minimal disturbance. 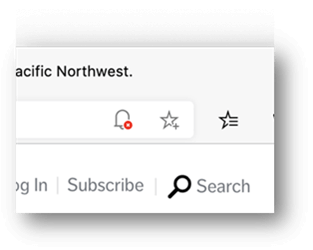 The idea in itself from Microsoft isn’t half bad, but the problem is with their reasoning. Here is the quote from Microsoft regarding how they plan on choosing which websites deserve to arrive at your browser silently:

As our score system represents the level of annoyance of the full prompt, “Block” yields a higher score indicating a strong negative signal, “Ignore” and “Dismiss” influence the scores as a week negative signal, and “Allow” yields the lowest score indicating a strong positive signal. Based on the collective score of users, we provide quiet requests to the websites whose scores are higher than the threshold.

In other words, Microsoft is assuming that if you click on the Block button when choosing not to accept a website’s notifications that it sends a signal that you hate the idea of subscribing to it more so than if you were to have clicked on the X instead. And I can tell you from my own experience that this is false reasoning. When people don’t want to accept a notification, they’ll click on whatever they feel like to remove it from their computer screens; they don’t view the term Block as a permanent block or an extremely negative thing; they view it as the alternative to accepting them.

Thankfully, you don’t have to join in with these shenanigans from Microsoft because you need to toggle on the Quiet notification requests toggle from the settings page before this new feature is enabled.

Personally, we don’t see a good future for push notifications. Most people never venture into the browser settings because it’s too technical a task for people who just want to browse the internet; I even see founders of cryptocurrencies clearly neglecting zooming in and out via the Settings page when they could just use those features which are all of two clicks away to make their lives much easier. And I don’t see a time in the future where things get much different.

Based on your feedback, we’re rolling out new updates to the Quiet Notifications experience in Microsoft Edge, to balance preserving valuable notifications with reducing unwanted prompts. Learn more and let us know what you think! https://t.co/u2ieu1gZhL

Mathew Diekhake is a certified Microsoft Systems Administrator from Australia and also the founder and editor of ConsumingTech.com. With a never ebbing desire to cover technology, he is mostly consumed by Windows, Linux, and Android. However, he has spent stacks of hours learning about a variety of computer software, both formally and informally, and has authored tens of thousands of tutorials and news articles since 2011. Mathew has obtained many Microsoft certificates and is a qualified sysadmin (MSCA). Read Mathew's full biography. Mathew's social profiles: Twitter, Facebook, Instagram, LinkedIn, Github
« Microsoft Makes it Simple to Set Age Restrictions in Edge with Kids Mode» Windows 10 Build 21313 Expands News Languages and Markets to Every Country