Firefox 83 comes with good new features such as the ability to search Google directly from the address bar, HTTPS-Only Mode, Picture-in-Picture Mode, and pinch to zoom. It also comes with plenty of general fixes and improvements. 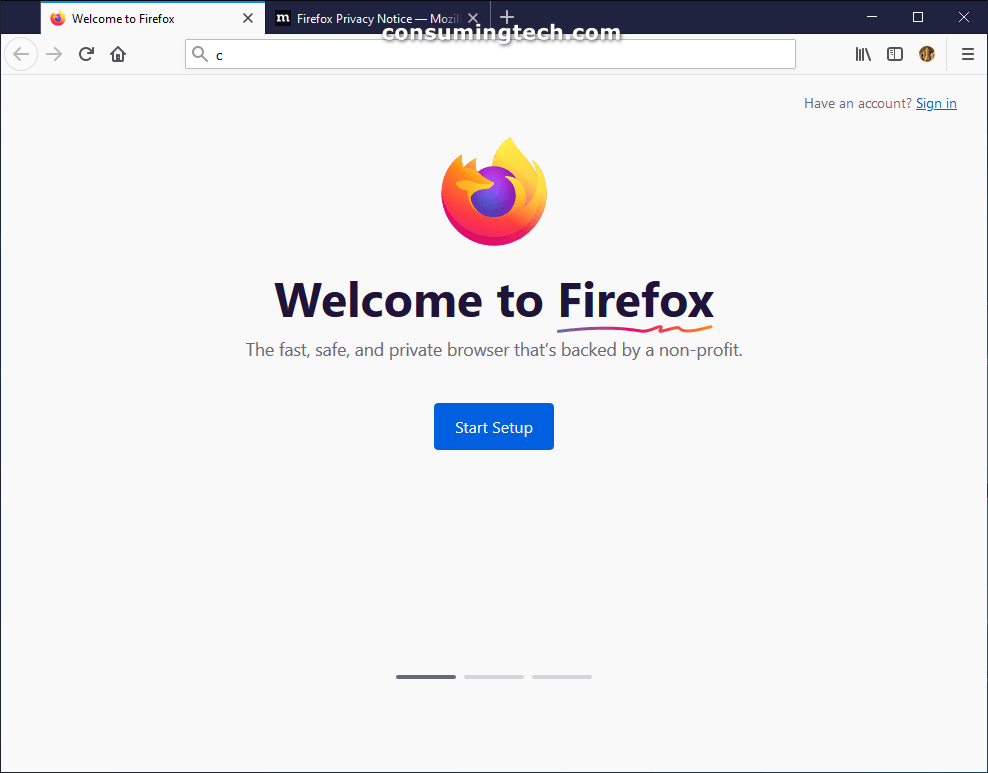 Firefox has been based on the Quantum engine for the past few years, but most don’t realize that Quantum is still based on Chromium; and that’s a good thing because we’ve seen recently Microsoft Edge change course and switch over to a Chromium-based browser themselves because its the right foundation to be on at the moment.

When you download Firefox 83, you get a dialog letting you know that an older version of Firefox is already installed on your computer. All you need to do is click on the “Update” button and the installation will begin.

If you kept the checkbox checked for restoring the default settings and removing add-ons, the installer will take a few minutes to optimize your settings for speed, privacy, and safety.

Upon installing the new browser, it offers you the chance to “choose a look” with the four options being Firefox automatically handling the design for you, a light theme, a dark theme, and a peculiar Firefox Alpenglow theme which we are yet to try. The dark theme in particular may be popular since lots of people are now using social media in dark theme. The dark theme helps you conserve battery when using a laptop.

The address bar in Firefox 83 has been enhanced to offer search results from Google right from the address bar itself. This means you can see the URL for websites of the top search results that you may wish to click on without having to open Google first. For many search results this won’t be all that handy; but for others it will help reduce your web surfing time by making your browsing experience more efficient.

Firefox 83 has improved functionality and design for a number of Firefox search features:

An all-new HTTPS-Only Mode is introduced to Firefox 83. HTTPS-Only is disabled by default so as to not cause any problems to your current browsing experience since Firefox doesn’t know what websites you visit. However, should you wish to turn on this new mode, it will mean Firefox gives you an alert upon visiting any website that does not have a valid HTTPS certificate. These certificates have become immensely popular over the last few years, mostly thanks to companies like Let’s Encrypt that have given millions of blogs cheap and easy access to be encrypted. While initially told not to worry too much if you’re not in E-commerce, just about all websites have now switched over to use encryption certificates, which are there to help you — the reader — remain private. These encryption certificates are especially handy for when you shop since that involves potentially your banking details which must remain safe.

New Fast-Forwarding and Rewinding for Picture-in-Picture

You can now use keyboard shortcuts for fast-forwarding and rewinding videos while using Picture-in-Picture Mode. The arrow keys will move 15 seconds forward or back in each direction. This matches up with the latest smart TVs which also offer a 15-second move in either direction when you click the arrow buttons.

Up until now even if you had a touchscreen device, you couldn’t pinch with your finger to zoom when using Firefox. That’s all changing now with Firefox 83. With pinch-to-zoom available, you can zoom in and out of supported devices simply by pinching your fingers. Firefox, as with all good browsers, still offers you the chance to zoom in and out from the Settings page as well, which is a feature not nearly enough people know about or use.

When you head to the Firefox site to download Firefox 83, it will override automatically your current browser that you have installed, so you don’t have to worry about ending up with two separate Firefox browser icons on your desktop. If you don’t mind waiting, over time your current version of Firefox will offer the update after you open the browser; you only need to download it from the website if you wanted to try it out now instead of waiting.

Firefox also includes a privacy notice in a secondary tab after you open the newer version for the first time. This notice lets you know what information Firefox 83 collects and what it doesn’t. This is with regards to the data that it collects to make its own web browser better rather than the information each website you visit collects for the sake of making each of their websites better for the world as well. Firefox is pretty good with its transparency with users and what data it collects, partly because it is an open-source browser.

Mathew Diekhake is a certified Microsoft Systems Administrator from Australia and also the founder and editor of ConsumingTech.com. With a never ebbing desire to cover technology, he is mostly consumed by Windows, Linux, and Android. However, he has spent stacks of hours learning about a variety of computer software, both formally and informally, and has authored tens of thousands of tutorials and news articles since 2011. Mathew has obtained many Microsoft certificates and is a qualified sysadmin (MSCA). Read Mathew's full biography. Mathew's social profiles: Twitter, Facebook, Instagram, LinkedIn, Github
« Cumulative Updates for Windows 10 on November 10, 2020» You Can Now Enable Tab Search in Google Chrome Canary