The Vivaldi web browser has been updated to version 2.11. This version of the browser comes with the added ability to more easily pop-out videos independently of the webpages on which you have found them. Other features include the chance to match the operating system’s theme (light or dark modes) easier, and quicker general navigation around the browser.

The biggest feature upgrade from Vivaldi 2.10 to 2.11 is undoubtedly the opportunity to watch pop-out videos in an entirely separate window from all else that’s been adjusted to be simpler for end-users. Vivaldi’s pop-out video has been around for a while (if interested, you can check out how to use it here: Pop Out Video – Vivaldi). 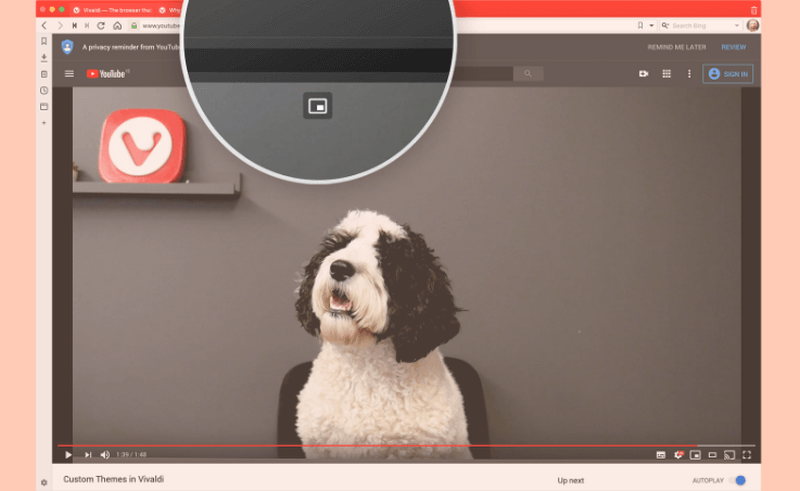 But the option to pop-out videos in new windows is just released. Vivaldi decided to expand on the original idea of the pop-out video due to positive user feedback, according to their official blog. The main difference between the original version and this version is that launching the new window will no longer be hidden behind menus, and it won’t require any additional clicks.

In addition to the more efficient pop-out videos, Vivaldi now changes its default theme to match the operating system’s light or dark mode settings. The changing of themes isn’t a new idea; we watched Microsoft initially release Windows 10 with automatically matching colors to go with the wallpapers that were chosen. However, as time passed, Microsoft backed away from its intent to match color, instead opting to allow users to choose their own.

There is a difference between the idea Microsoft had proposed and this one, though. Vivaldi’s choice to match the light and dark mode makes a lot more sense, and will likely be a feature users appreciate. It means that if you are using Windows 10 or macOS in a dark mode, then Vivaldi will automatically adjust its browser, when you open it, to match the dark mode as well.

Mathew Diekhake is a certified Microsoft Systems Administrator from Australia and also the founder and editor of ConsumingTech.com. With a never ebbing desire to cover technology, he is mostly consumed by Windows, Linux, and Android. However, he has spent stacks of hours learning about a variety of computer software, both formally and informally, and has authored tens of thousands of tutorials and news articles since 2011. Mathew has obtained many Microsoft certificates and is a qualified sysadmin (MSCA). Read Mathew's full biography. Mathew's social profiles: Twitter, Facebook, Instagram, LinkedIn, Github
« How to Open Windows Mobility Center in Windows 10 [Tutorial]» How to Reset Windows Mobility Center Default Open Position in Windows 10 [Tutorial]