If you have been keeping up with Windows news, you would be aware that Microsoft has scrapped the plans for the EdgeHTML-based version of Microsoft Edge and has been instead working on a Chromium version.

The new version that will be based on Chromium has some perks that the old one didn’t have, such as better website compatibility. This is because the foundation of the web browser is the same as Google Chrome, a web browser that had taken most of the market share and was being catered to by most developers ahead of all others.

If you are a regular user of Google Chrome already, you will love the fact that you can now use all the same browser extensions in the Chromium version of Microsoft Edge. Microsoft has struggled to get into the smartphone market not because it couldn’t create a great mobile operating system but rather because the app store run by Microsoft wasn’t getting enough developers caring about it which meant most of the good apps were available on other platforms. A similar problem was going to happen with Edge now that Google Chrome has so many users: lots of people wouldn’t want to use Edge because it wouldn’t have had anywhere near the same number of browser extensions available to use as Chrome does. That problem has now been eliminated. It might not be enough to steal your heart and swap browsers straight away, but at least you’ll know you can always use Edge as the backup browser.

This Is Only a Beta Version Still — Not the Final Release

Keep in mind that this release is the beta version of Microsoft Edge, which means that while you should find most of the features available to use, you won’t have as smooth an experience as the final release. This release is more for developers who want to help improve Microsoft Edge before it goes public. Also enticing is checking out the beta version if you just want a sneak peek at the features. Just be sure now to complain about Edge being buggy or not as good as the Chrome you use now—it doesn’t pretend to be that good, that is what beta versions are about. 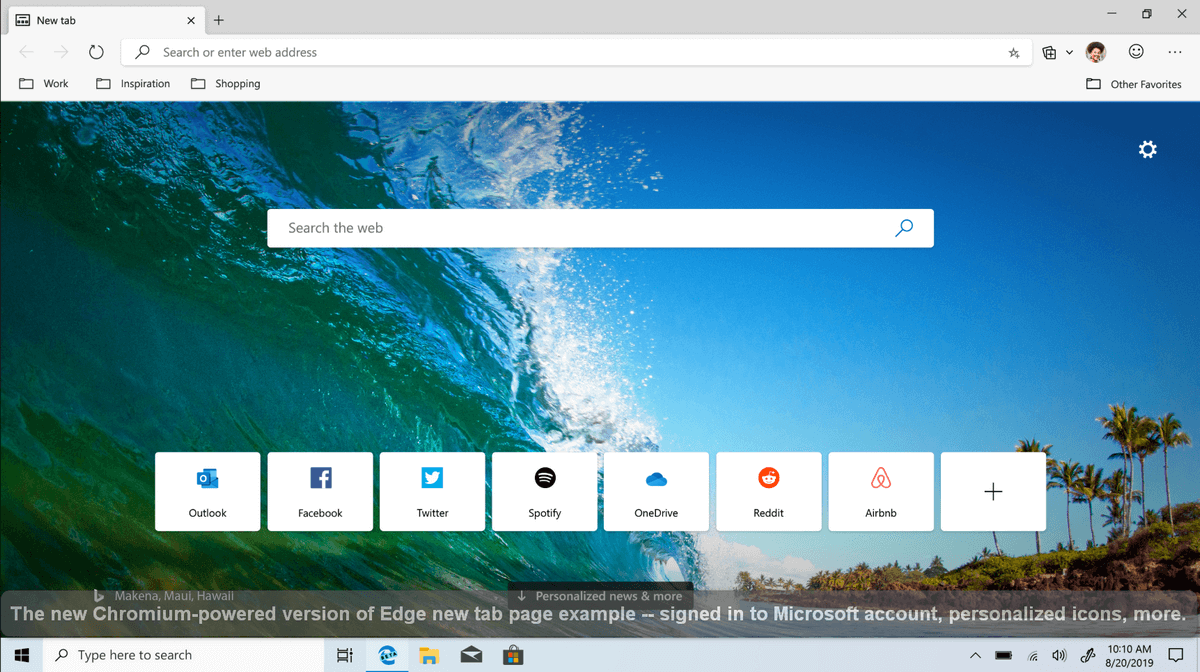 It appears as though Microsoft has chosen to remove the MSN webpage that has been with us for many years, and has chosen to replace it with a more traditional home page and new tab page, like what you expect to find from Google Chrome and Firefox. The screenshot example they showed in the press release suggests you may still be able to scroll down to see your MSN personalized stories if you liked getting your news from Microsoft.

But what you definitely do get is the long-awaited chance to browse Edge while signed in to your Microsoft account. It is yet to be explained what he advantage of that will be because it will differ from being signed in to Google when you use Chrome, but perhaps there are some Windows 10 integration benefits. What’s more, you get a large search box in the center of the screen, similar to other leading browsers, which will presumably search Bing by default (but you can always change that to Google as the default from the settings if you prefer). Edge’s new tab page—signified by the fact hat it calls itself a new tab on the tab itself—also appears in the screenshot as the home page.

Beta Version Is One Step Before Final Release

While you can download Microsoft Edge beta on both Windows and macOS, this is still not the final release. Thankfully Microsoft has stated that this beta will be the final version before the official release gives online for everyone to use, though. So you will not have to wait much longer for the full and bug-free version to go live.

Part of the reason Edge is taking so long is because it gets some features, such as the Internet Explorer mode, that will be used by organizations to help integrate Internet Explorer and Microsoft Edge usage. Many organisations are still using Internet Explorer in the workplace since Microsoft continues to keep it updated to meet all of today’s security requirements.

Be one of the first to try the next version of Microsoft Edge! The first Beta preview build is available now. https://t.co/789EuJhrVI pic.twitter.com/JGjGlH5TG3

Mathew Diekhake is a certified Microsoft Systems Administrator from Australia and also the founder and editor of ConsumingTech.com. With a never ebbing desire to cover technology, he spends most days consumed by Windows, Linux, and Android in particular. However, he has spent innumerable hours learning consumer tech software in general, formally and as an autodidact, and has authored tens of thousands of tutorials and news articles since 2011. Mathew has obtained numerous Microsoft certificates and is a qualified sysadmin (MSCA). Read Mathew's full biography. Mathew's social profiles: Twitter, Facebook, Instagram, LinkedIn, Github
« How to Enable/Disable Microsoft Edge Pre-launching in Windows 10 [Tutorial]» How to Install QMobile A950 Firmware Flash File