Microsoft Edge Insiders are now starting to find a new voice typing feature that comes with dictation for native languages integrated into the context menu for some areas when browsing websites, namely from the address bar as well as the comment section.

For years now Microsoft has been confident voice searching would eventually gain traction with the public. Though it has taken a lot longer than they had hoped — particularly with Cortana — Microsoft is now beginning to update their web browser, Microsoft Edge, with the ability to voice search which can be used instead of typing with the keyboard. 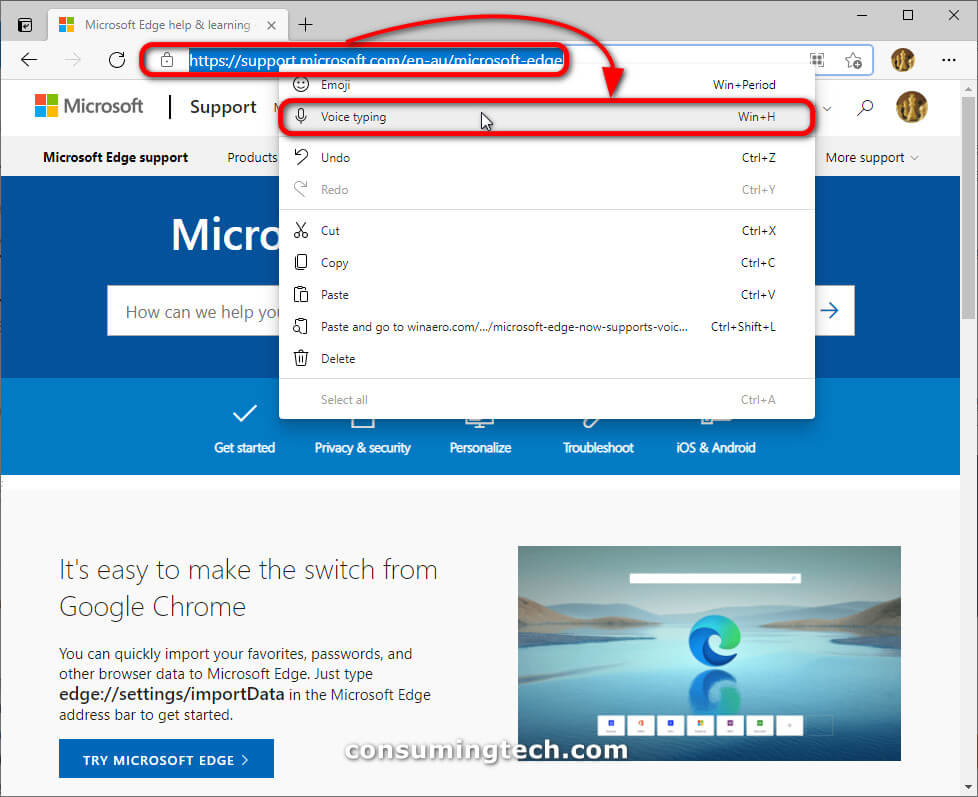 While Cortana integration may be lacking these days because users didn’t use the voice assistant enough, there are plenty of people out there who do like to voice search in general. We see this all the time with devices such as Google Home and Google Nest where homeowners love the idea of talking to the Google device to get things like weather reports and music to play. Voice typing is a little different however because it can often be used by those who simply don’t have the ability to type, and therefore, it’s a feature that needs integration before things like Cortana get pushed to the public. 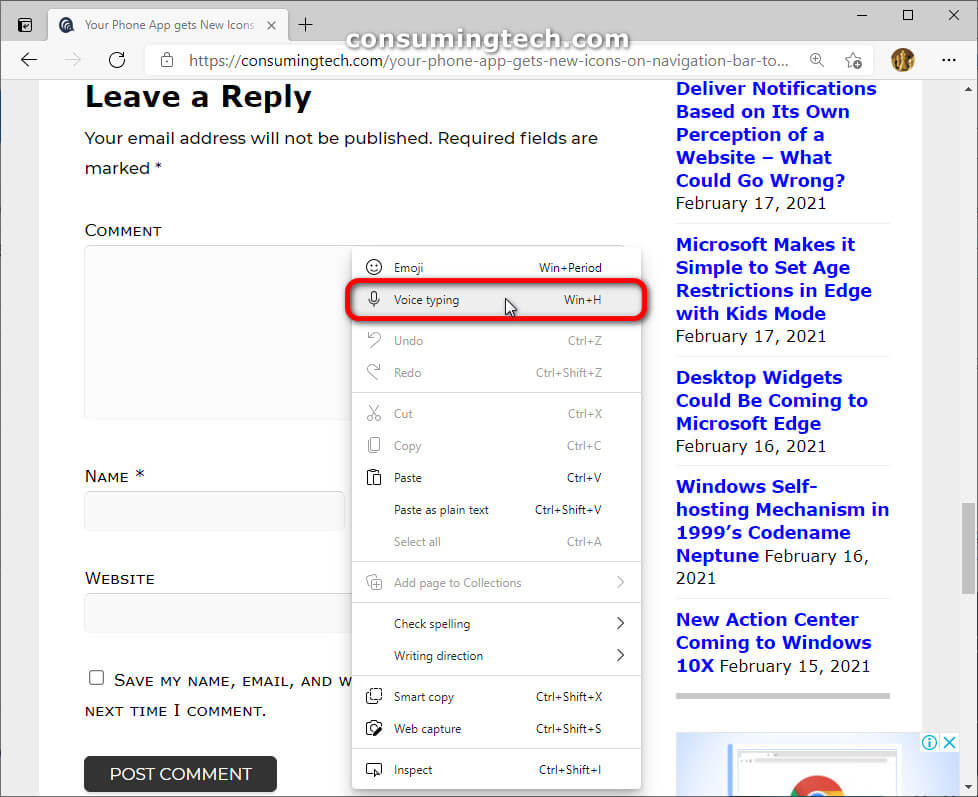 You can find Edge’s new voice typing feature from the context menu regardless of the websites you visit. Just look for the “Voice typing” entry, like in the screenshots above. You can also find it available on the Bing homepage and new tab pages, as well as on every address bar after right-clicking on them.

If you want to try voice typing on Edge, you will need to become a Microsoft Edge Insider and more specifically install the Canary version of the browser on your computer. Note that you will only see voice typing from the context menu if the computer you are using has a microphone.

Once you click on Voice Typing from the context menu, it will show you at the top of the browser window that it is “listening” for your speech. As soon as you start talking, it will begin typing all by itself the words you say into the available fields that you have clicked. For instance, if you have accessed voice typing from the comment section of a website by right-clicking in the comment field itself, then it will begin typing what it hears into that comment field — this works for the name field, email field, and the actual comment field; the same goes for when you right-click the address bar at the top of the browser instead: it will begin typing a new web address in that address bar if that is where you have clicked. In other words, the voice typing feature is always available via the context menu on all the parts of a website — when using Edge — that it can be useful. Note that this box at the top of the browser window that opens to listen to your voice doesn’t automatically close by itself; rather, you will need to click on the X to remove it, which is located on the right side.

Microsoft is also testing voice typing for Bing. Here is an example: 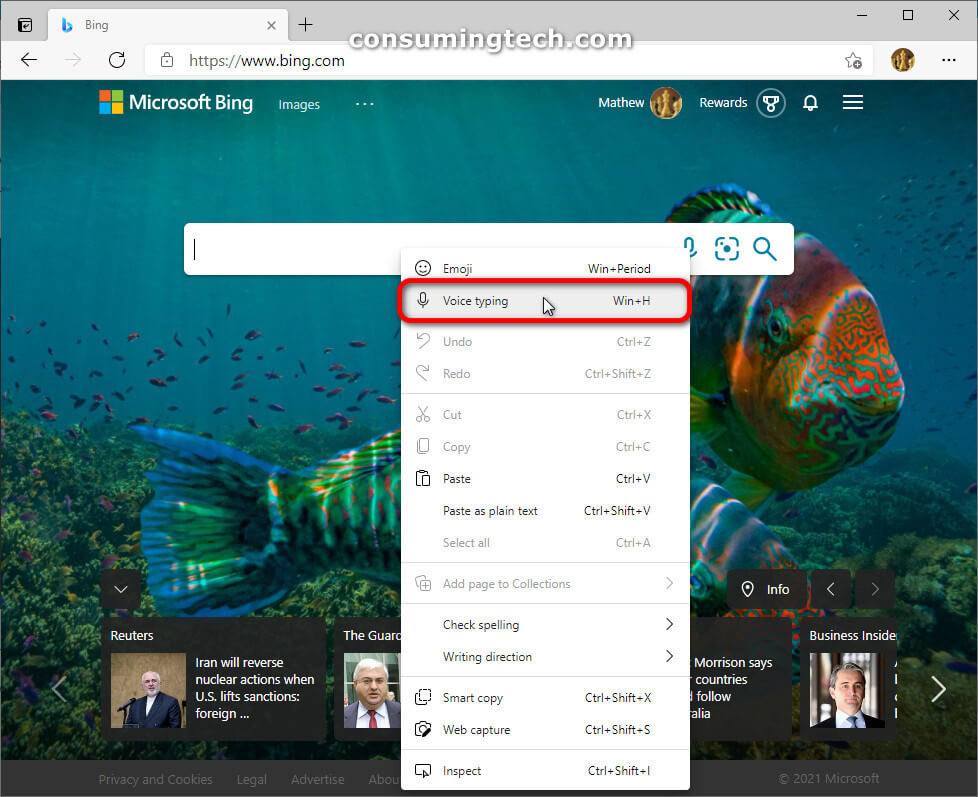 Though you would need to become an Edge Insider to use voice typing right now, it is our guess this is a feature that will absolutely be added to official Edge builds soon enough; it’s surprising that Edge doesn’t have it already.

Mathew is a qualified Microsoft Windows systems administrator (MCSA) who has covered OSs, browsers, the internet, and related tech since 2011. He is the founder and editor of ConsumingTech.com and is a freelance tech writer for various publications around the Web. Mathew graduated from DDLS Melbourne (now Lumify). He grew up in Melbourne and lives in rural Victoria, Australia. Read Mathew's full biography. Mathew's social profiles: Twitter, Facebook, Mastodon, Instagram, LinkedIn, and Github.
« New Icons on Navigation Bar for ‘Your Phone’ App to Manage Phone Settings» Magisk v22.0 Merges Magisk and Magisk Manager