The Web can be as helpful a place as it can be harmful. Feeling lonely because no one you know in the real world is anything like you? You should be able to find people somewhere around the world who do share your views, who do think like you, who do help you feel less alone by using the internet. On the other hand, it can also leave you feeling even more lonely when you browse around Facebook and see all the top comments liked by the most people have completely missed the point, as usual, entirely—at least when in comparison to your views.

Touching the display of your devices isn’t going to be as rewarding as a human touch, but it is nonetheless another positive advancement in technology because there are times when some people can’t be using a mouse/touchpad or simply don’t want to. When you’re laying in bed with the keyboard not attached and using a Surface device as a tablet, for example, then you’ll want to be scrolling up and down the screen with your fingers.

The following tutorial demonstrates how to change the touch scrolling friction in a version of the Windows 10 operating system.

How to Change Touch Scrolling Friction in Windows 10

You can adjust the touch scrolling friction for your touchscreen computers and mobile devices that run Windows 10 by using the Registry Editor in Windows 10 Here is how you can do that:

1. Press the Windows logo key + R keys on your keyboard to bring up the Run dialog and then type Regedit and hit the OK button to get the Registry Editor window open.

2. Now navigate to the HKEY_CURRENT_USER\Software\Microsoft\Wisp\Touch path using the left side pane. In the right side pane double-click the mouse on the Friction name. 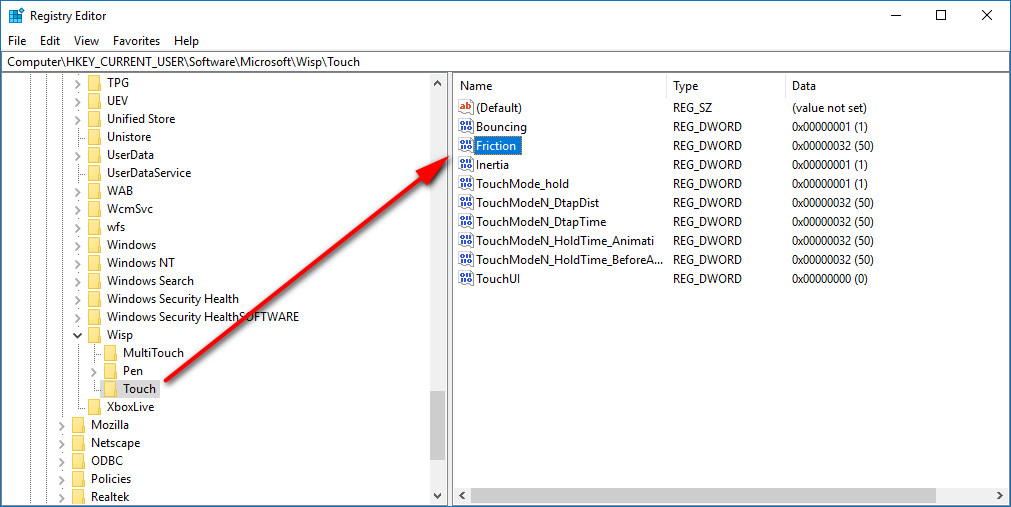 3. It’ll then open up the Friction DWORD value that you can edit. By default is set to 32 and can handle numbers ranging from 0 to 64.

Change the number to the value of your choice and then click on the OK button to save the changes. 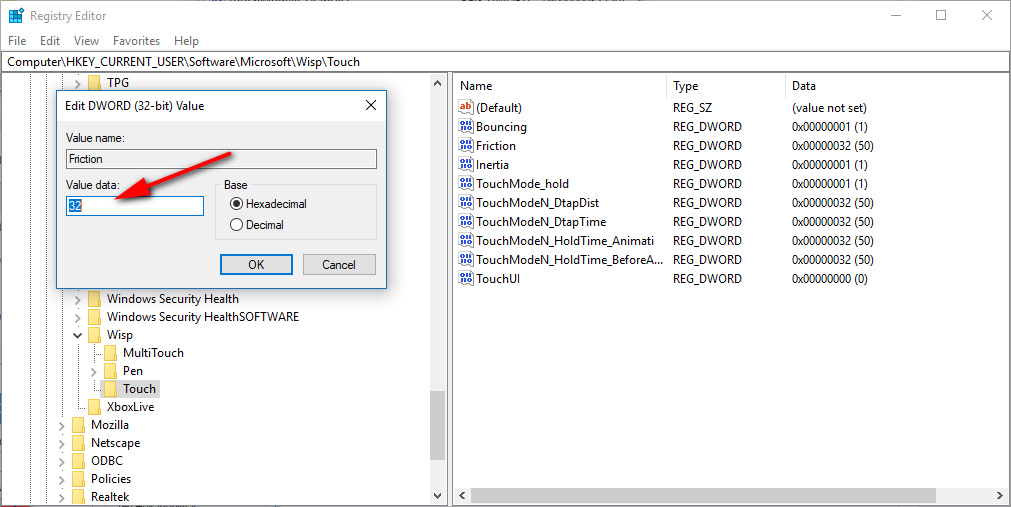 You can now close the Registry Editor.

Mathew is a qualified Microsoft Windows systems administrator (MCSA) who has covered OSs, browsers, the internet, and related tech since 2011. He is the founder and editor of ConsumingTech.com and is a freelance tech writer for various publications around the Web. Mathew graduated from DDLS Melbourne (now Lumify). He grew up in Melbourne and lives in rural Victoria, Australia. Read Mathew's full biography. Mathew's social profiles: Twitter, Facebook, Mastodon, Instagram, LinkedIn, and Github.
« Collect System Specifications in Windows 10» Shrink Volume/Partition in Windows 10