How to Auto-Create and Collapse Tab Groups in Microsoft Edge

I want to be able to better order my Microsoft Edge tabs because when I use my computer I often have many tabs open and it becomes cluttered and causes confusion. I want Edge to be able to allow me to categorize my tabs so each website remains grouped together, which will help with my sorting. Resolution:

We have been requesting for Microsoft to add the ability to be able to click and drag a tab over to the right side of the browser window so it can be dropped and thus separated from the pack so as to offer an easy way to make a distinction between a tab that you know you might want to single out. Microsoft is yet to appreciate this idea, but they have just added a Group Tabs feature which had recently rolled out to Google Chrome and does something similar.

When using Group Tabs, Microsoft Edge will automatically create a group of tabs when you are browsing different tabs from the same website. For instance, if you were to click through a few of our recent articles, all of those articles would be grouped so you have all the ConsumingTech tabs together. While it doesn’t help with wanting to single out an individual tab from the bunch, this is at least a nice addition to any good web browser going forward, and particularly for all the people who we see with dozens of browser tabs open at a time because they aren’t the type to close what they were previously doing. This has become increasingly a problem with older people are their smartphones; instead of pressing a thumb over the “X” to close a tab, they just open another tab without realizing the eventual repercussions of doing so. While for some this could be an attempt to lazily bookmark, for most it’s likely a misunderstanding. For the record, it’s always a good idea to close the tabs you’re done with rather than letting them remain open in the background, which includes for mobile devices, because the more tabs you have open the harder you’re making your computer hardware work. Eventually, you may notice a sluggish device because it can no longer handle the number of tasks you’re keeping open.

An example of adding a tab to a new group 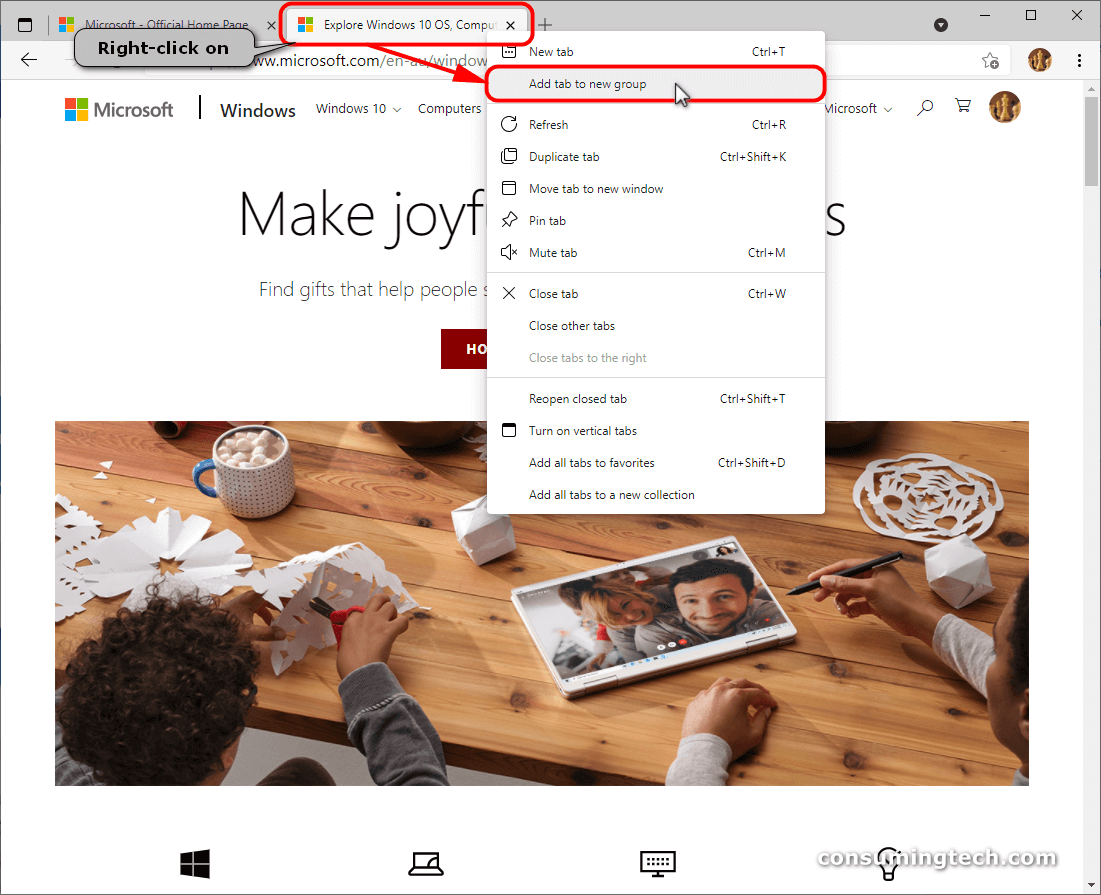 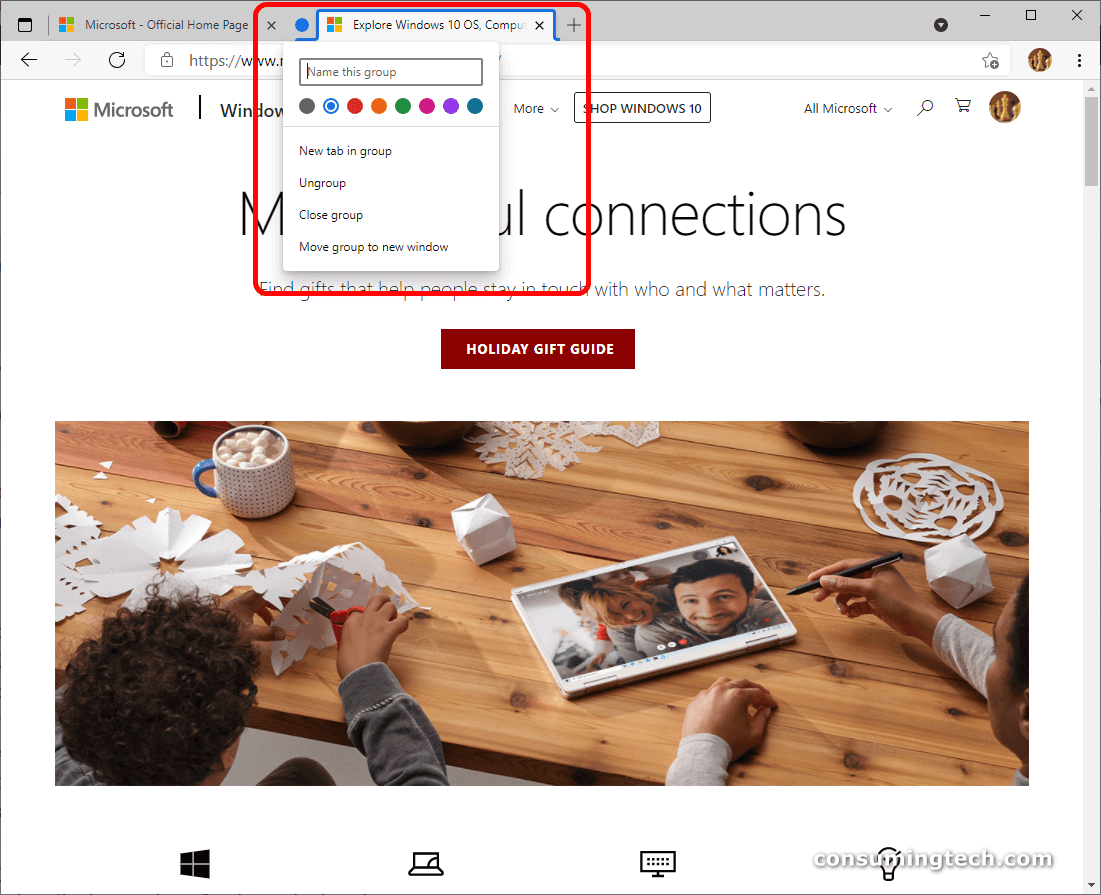 Not only can you manually create these grout tabs, but starting from Microsoft Edge Canary build 89.0.722.0 there’s also a new Tab Groups Auto-Create experiment available from the Edge experiments page. For those who are new to Edge, the experiments page is the equivalent of the Chrome flags page. Edge has this page too now, since they’re both Chromium browsers now. 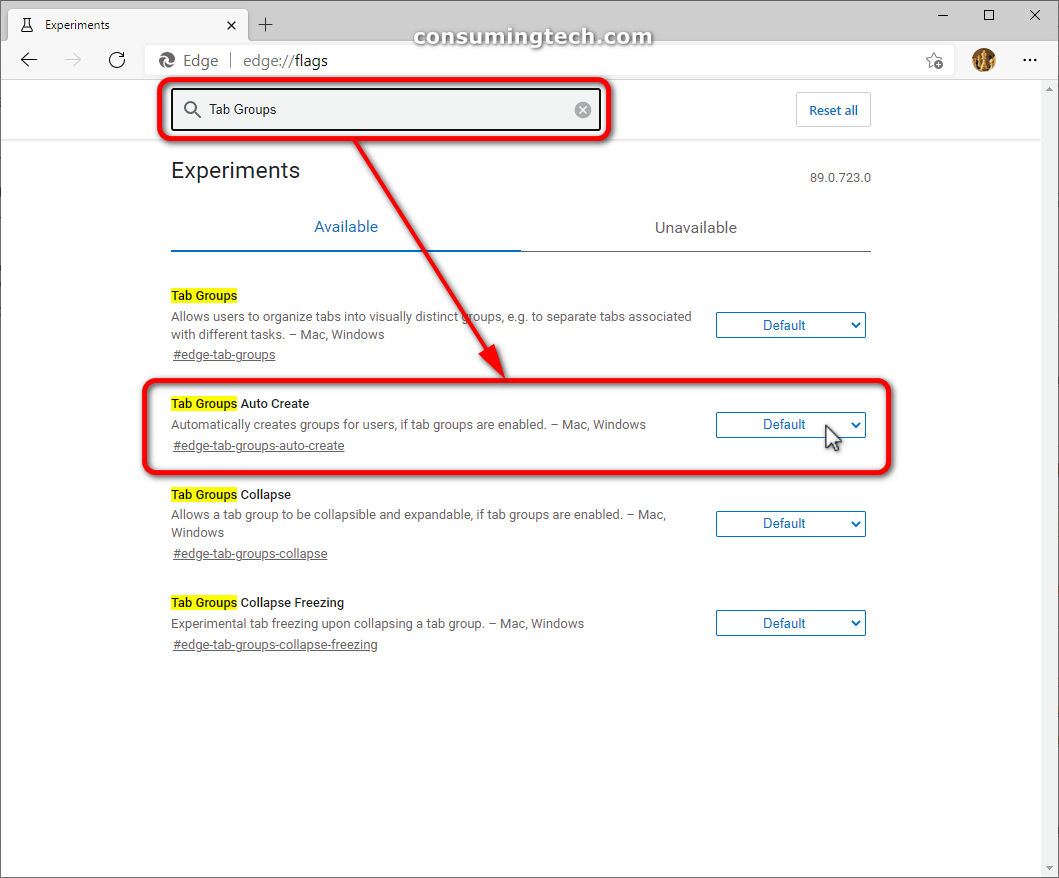 How to Auto-Create Tab Groups in Microsoft Edge

You can change the default Tab Groups Auto-Create setting and enable it instead from the Microsoft Edge flags page, which is there for Edge experiments. Some of these experiments may become standard features in the future included in the browser by default. Here is where you can find it:

2. Copy and paste the following URL into Edge’s address bar at the top of the browser window:

4. Once you have made the change to the drop-down menu, click on the Restart button toward the bottom of the browser window. (Click to enlarge the screenshot below.) 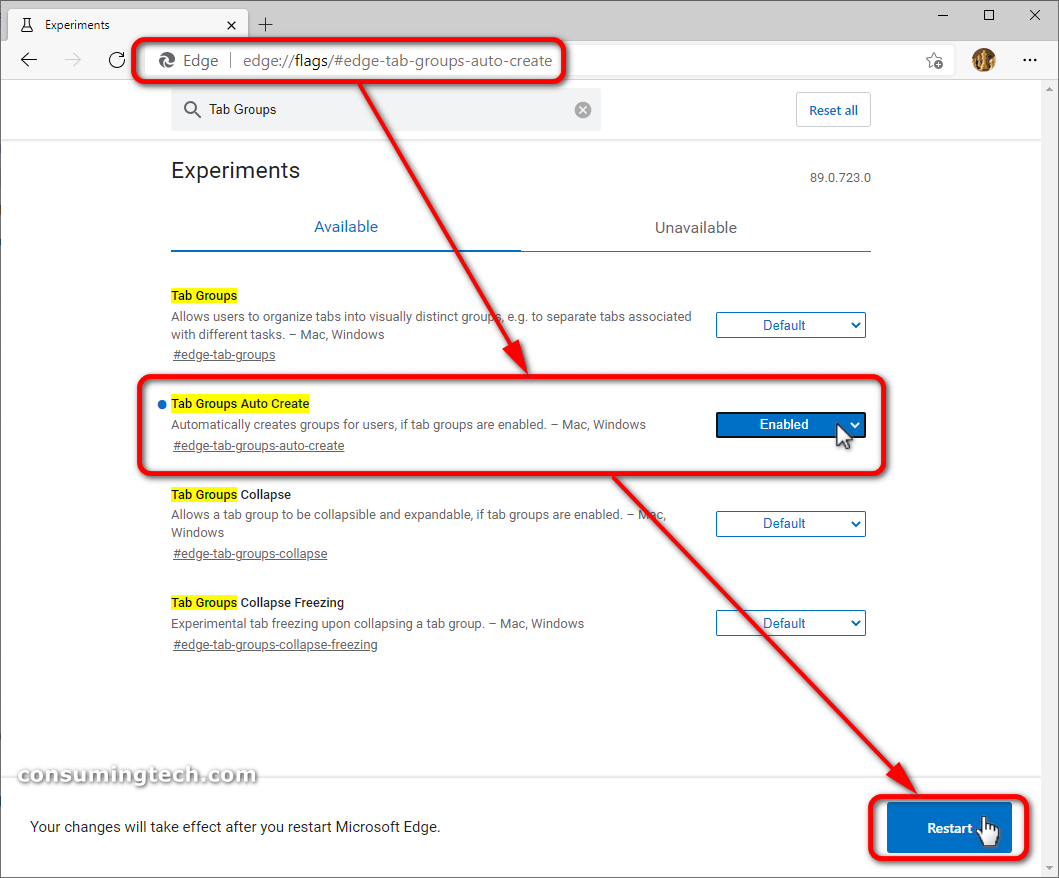 How to Collapse Tab Groups in Microsoft Edge

In addition to enabling the Tab Groups feature, you can also keep Tab Groups enabled and collapse a group rather than disabling the whole thing entirely. This can be useful if you have multiple groups in your tabs and you know you don’t need to use one of those groups for a particular time. Being able to collapse Tab Groups removes the clutter and makes your computer screen less confusing while performing your tasks.

You can collapse Tab Groups from the Microsoft Edge flags experiments page by searching for the same Tab Groups flags. Here is where you can find it and enable it:

2. Copy and paste one of the following URL address into Edge’s address bar: 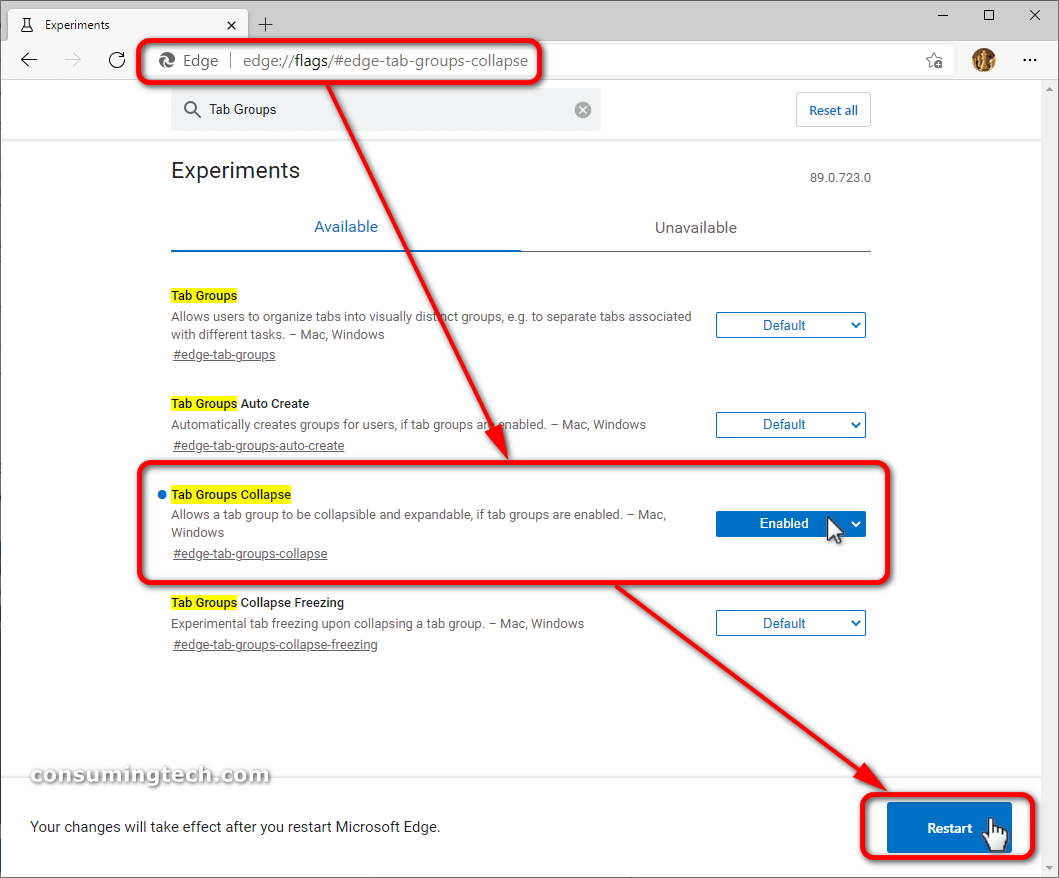 in Microsoft Edge No Comments

Mathew is a qualified Microsoft Windows systems administrator (MCSA) who has covered OSs, browsers, the internet, and related tech since 2011. He is the founder and editor of ConsumingTech.com and is a freelance tech writer for various publications around the Web. Mathew graduated from DDLS Melbourne (now Lumify) in 2011. He grew up in Melbourne and lives in rural Victoria, Australia. Read Mathew's full biography. Mathew's social profiles: Twitter, Facebook, Mastodon, Instagram, LinkedIn, and GitHub.
« How to Enable/Disable InPrivate Browsing in Microsoft Edge» How to Enable/Disable Tab Groups in Microsoft Edge