I already run a reliable antivirus/antimalware program that should keep my computer safe but I’d like to add another layer of protection that prevents me from downloading Potentially Unwanted Applications (PUAs) when I’m browsing the internet. I realize that the protection is only going to be specific to the web browser that I’m using, which is Microsoft’s Microsoft Edge. Resolution:

Microsoft Edge Chromium has been made available to download from the Microsoft website as of January 2020. By late February, it had begun to roll out via Windows Update in Windows 10 to computers all over the world, though it can still be installed on Windows 7, Windows 8, and macOS operating system versions and operating systems as well.

Microsoft has chosen to base its Edge web browser on the Chromium open source project, which is what Google Chrome uses, to adopt better compatibility standards around the Web. Subsequently, the new Edge offers equal to the best performance and compatibility standards of any web browser, and it should continue to stay that way for the foreseeable future. While the older Microsoft Edge based on EdgeHTML first seemed like a good idea, as time went on, a lot of the Web’s traffic was visiting from websites that would not render EdgeHTML as well as alternatives like Chromium.

The new Chromium-powered Microsoft Edge browser has exactly the same foundation as Google Chrome, the world’s most used and admired web browser, which will provide Edge users with the best loading web pages possible.

Microsoft does not consider potentially unwanted applications (PUAs) malware or even a threat to your computer. Most of the top malware experts outside of Windows would disagree because PUAs are a threat to your experience rather than computer systems. PUAs are also known for installing software on computers without users’ consent, which is another reason security experts are often happy to categorize them as malware. While there may come a time when Microsoft changes its mind, it is at least refreshing to know that they do offer the chance for users to turn on PUA protection, both from Microsoft Defender antivirus and from the Microsoft Edge browser.

The following tutorial demonstrates how to turn on or off Potentially Unwanted App (PUA) protection in Microsoft Edge (Chromium). 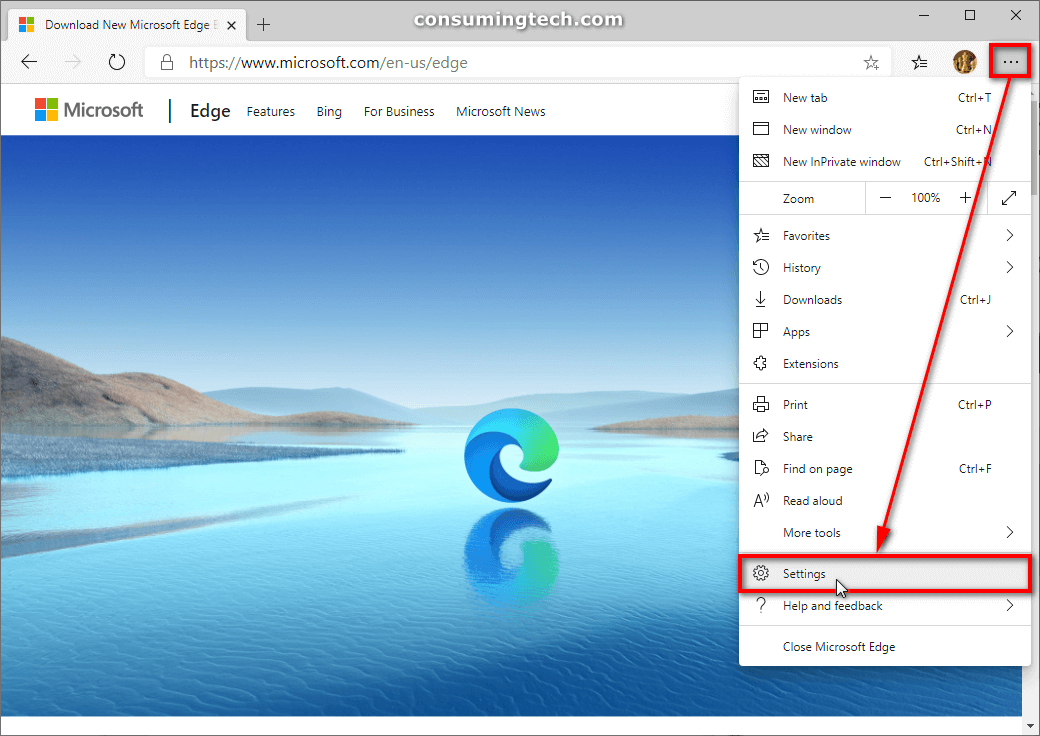 a. Under the Settings menu on the left side, click on Privacy and services and then scroll down and toggle on the setting Block potentially unwanted apps. (click to expand screenshot below) 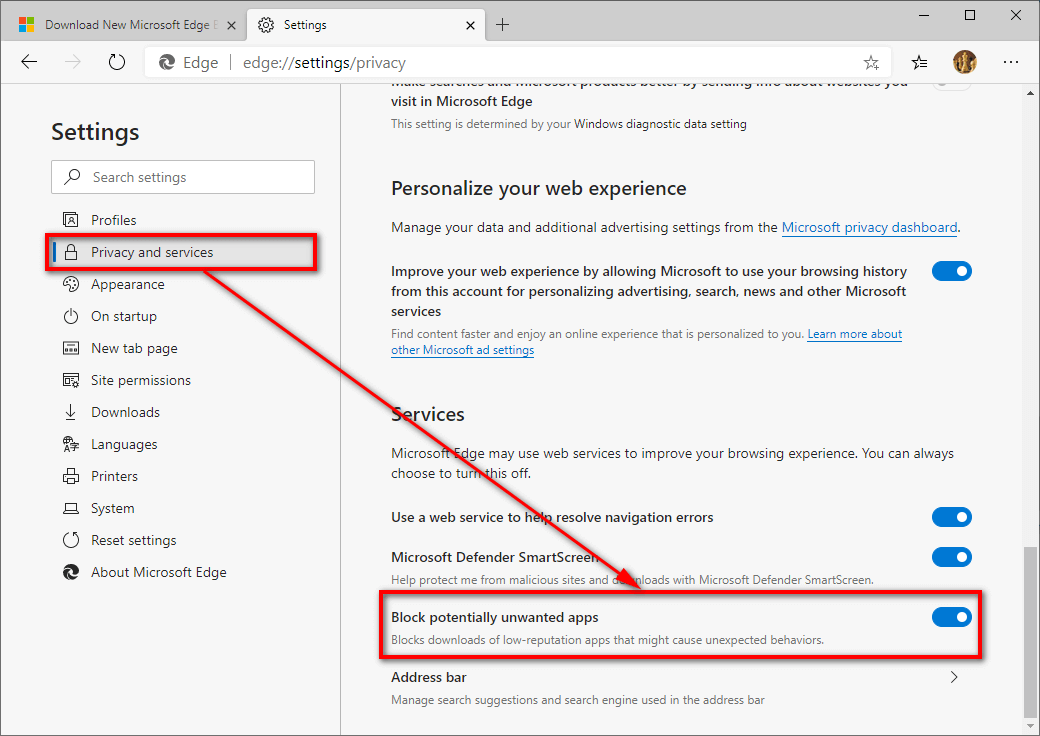 a. Under the Settings menu on the left side, click on Privacy and services and then scroll down and toggle off the setting Block potentially unwanted apps. (click to expand screenshot below) 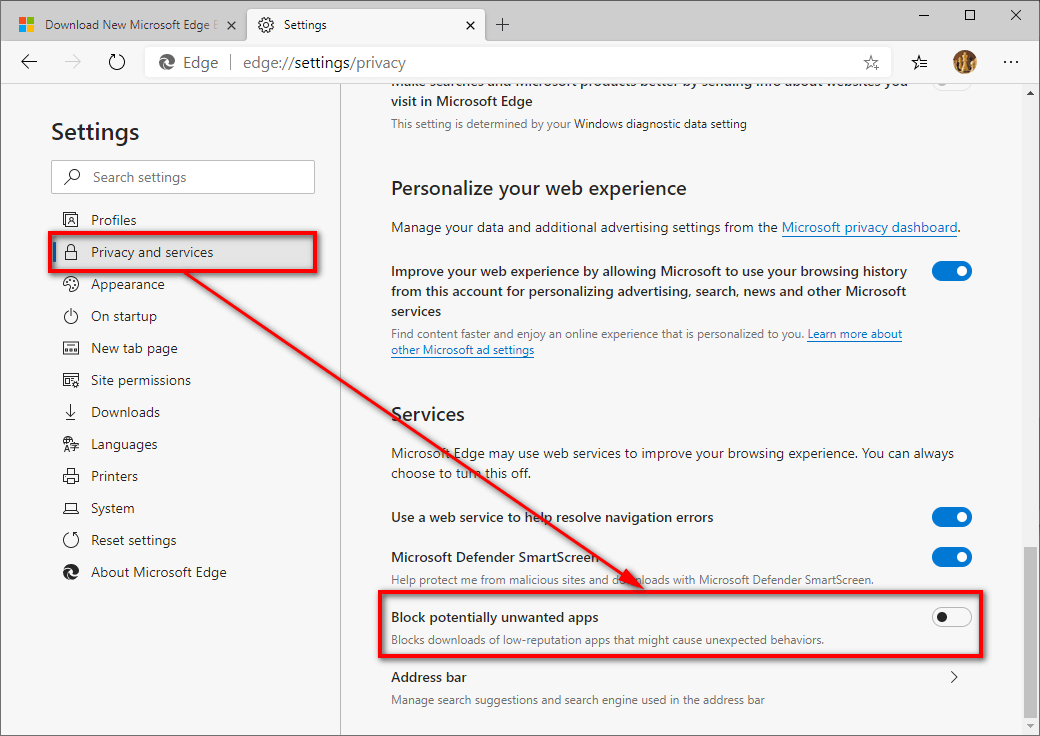 You can now close the Settings and continue using the Microsoft Edge browser if you like.

Mathew is a qualified Microsoft Windows systems administrator (MCSA) who has covered OSs, browsers, the internet, and related tech since 2011. He is the founder and editor of ConsumingTech.com and is a freelance tech writer for various publications around the Web. Mathew graduated from DDLS Melbourne (now Lumify). He grew up in Melbourne and lives in rural Victoria, Australia. Read Mathew's full biography. Mathew's social profiles: Twitter, Facebook, Mastodon, Instagram, LinkedIn, and Github.
« How to Enable/Disable Microsoft Edge Pre-launching in Windows 10» How to Enable/Disable InPrivate Browsing in Microsoft Edge