When we first started using Windows 10, we were really excited. But a lot of our readers expressed concern. At first, we didn’t think much of those concerns, but as more and more people raised them, it became something we started to pay more attention to. And it did turn out that many of those concerns were justified in the sense that it became no secret that Windows developers had some work to do before the operating system became as reliable as it eventually did become.

But for us, updating to Windows 10 was still an easy choice, and the reason for that was because we were willing to overlook the small occasional thing for a much more updated interface and overall operating system.

As soon as you opened the Start menu, you could see a drastic yet delightful difference between Windows 10 and the Windows 7 most people were still using. One of the features that was still a lot better than its Windows 7 counterpart but was lacking in comparison to other areas of Windows 10 was File Explorer; it didn’t really suit the rest of the OS and seemed more to match the Control Panel which was in the middle of being phased out. Windows developers could be addressing this soon with the updated UWP (Universal Windows Platform) File Explorer.

The UWP File Explorer is quietly being worked on in the background, and could eventually replace the current File Explorer that has been with us all throughout Windows 10 to date. For years people have complained that File Explorer didn’t offer the features they wanted, and yet, Windows developers didn’t act on this; it could be because they simply couldn’t because the foundation of code didn’t support what they were requesting. We know from assessing other applications that being a UWP app does result in more features coming along with it, so the same is likely on the way for File Explorer. But for now, we’re just starting to see the initial growth phases which now includes an address bar.

How the new UWP File Explorer appears when you first open it: 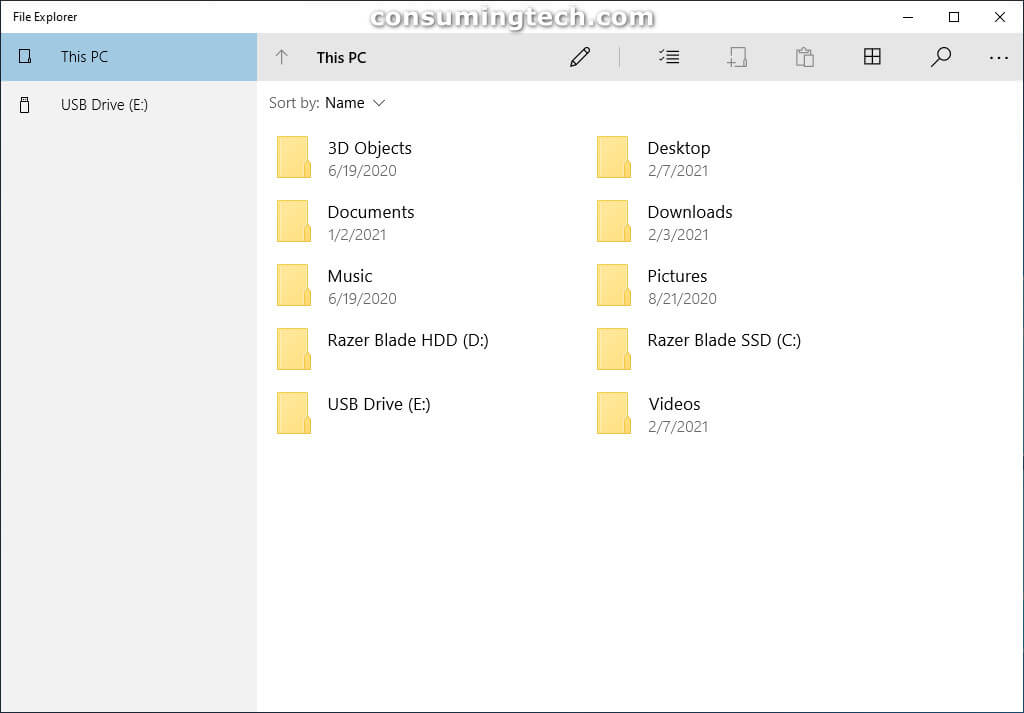 From our perspective, we like it. It’s a much more modern feeling when you open it up, similar to when you upgrade a computer from Windows 7 to Windows 10 and you venture into the Start menu.

You can add custom paths to the new File Explorer address field.

The new File Explorer address field also comes with its own context menu, so you can do things like past your paths.

How the UWP File Explorer appears in the taskbar. (The icon is on the far right.)

It’s entirely possible that the design of the UWP File Explorer changes as the Windows developers continue to add more features, and it will undoubtedly begin to be more cluttered as new parts for it become available, but overall, you can tell instantly that this version of File Explorer is going to be the modern upgrade to the File Explorer of the future that Windows needs.

If you would like to try out the UWP File Explorer, you must create a new desktop shortcut, and then paste the following command into the site location field:

Mathew Diekhake is a certified Microsoft systems administrator from Australia and also the editor of ConsumingTech.com. He has been inseparable from the internet since Web 2.0 in 2005 and by 2008 decided on a career within IT. With a never ebbing desire to cover technology, he spends most days consumed by Windows, Linux, and Android in particular; however, he has spent innumerable hours learning consumer tech software in general, formally and as an autodidact, and has authored tens of thousands of tutorials and news articles since 2011. Mathew has obtained numerous Microsoft certificates and is a qualified sysadmin (MSCA). Read Mathew's full biography. Mathew's social profiles: Twitter, Facebook, Instagram, LinkedIn, Github, Reddit.
« How to Remove Ender Ransomware Screen-locker (Malware Removal Guide)» How to Remove YunPanSer Browser Hijacker (Malware Removal Guide)