Turn On/Off Notifications from Apps and Senders in Windows 10

Part of what makes Windows 10 a more modern operating system compared to its predecessors is the use of notifications. The way you receive your notifications is from the Action Center which appears on the far right side of the display of the computer for a few seconds after a new notification has come in, and is also available by clicking on the Action Center button in the notification area’s bottom right corner, next to the clock.

You can receive notifications from applications that have been built to work alongside Windows 10, the native applications that Windows offers, as well as system notifications coming from Windows. One of the more common ways of getting some of these notifications that many Windows users will be able to relate to is by having stuff marked on your Calendars. For example, I have got the Houston Rockets worked into my personal Calendar so that their season schedule is already penciled in, and when it’s five minutes until tip-off, I get a notification coming into my Action Center that lets me know about it.

If you’re interested in turning them off but aren’t quite sure if you know what notifications this is specifically talking about, all you have to do is look in the bottom right side of your computer’s display. At times you’ll be getting banner notifications that show up just above the taskbar, to the far right side where it shows the system tray, and they’ll stay there for a few seconds and then disappear on their own. If you haven’t managed to click on it though, it won’t be gone for good just yet. You can then click on the Action Center icon in the taskbar, and it’ll show you, although a smaller version of, the same notification sitting within the Action Center space now, still to the right of your computer’s display, but just a bit higher up. Those are the types of notifications that you’ll be turning on or off during this guide.

The following tutorial demonstrates how to turn on and off the notifications from applications and other senders when you’re using a version of the Windows 10 operating system.

You can turn the notifications for applications and senders on or off from the Settings application in Windows 10. Here is how to do that:

1. Head to the Start menu > Settings > System > Notifications and actions and then scroll down the right side pane until you can see the Notifications heading. Beneath it is the toggle for Get notifications from apps and other senders that you can toggle on and off, depending on your preference.

Using this toggle is going to turn all notifications either on or off. If you wanted just to turn some off and leave the others on, you could achieve that by following the next step. 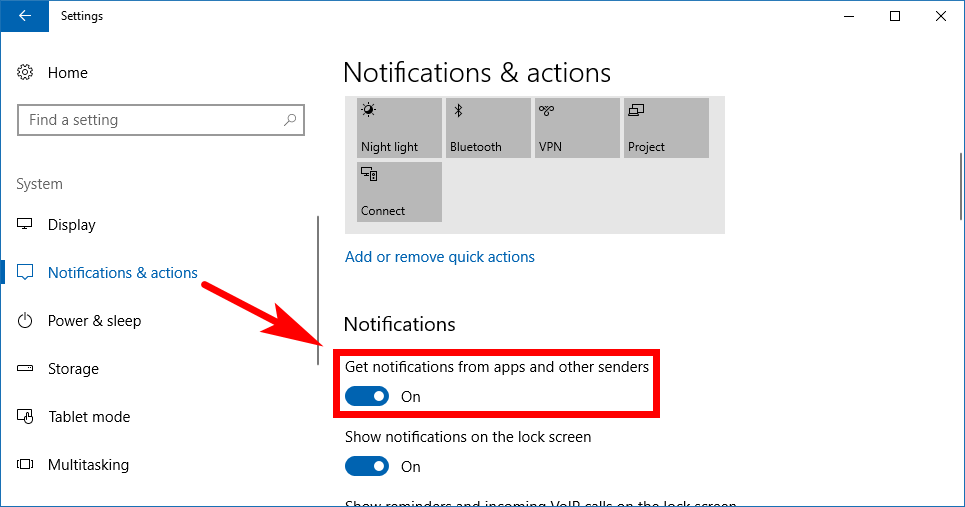 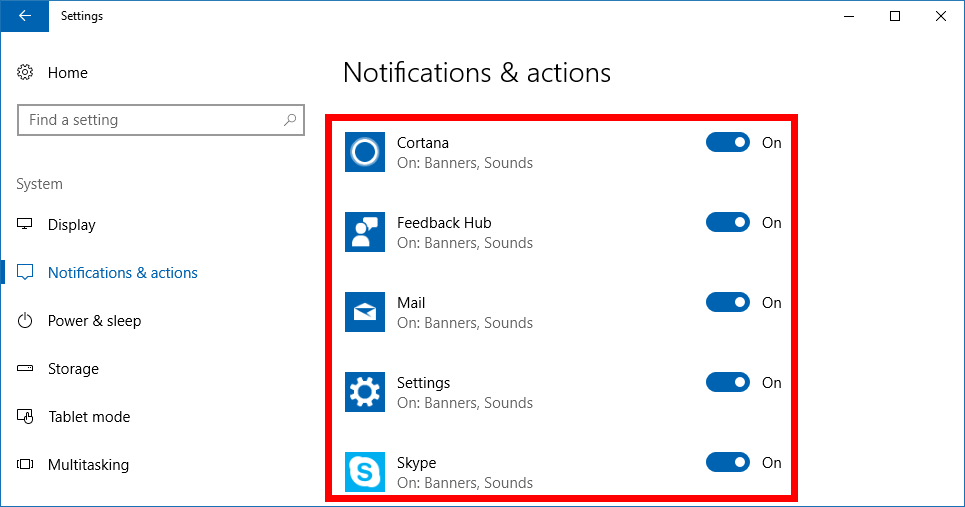 It should also be noted that some people’s Action Center can change in appearance, leaving them unsettled. This is due to the nature of how the Action Center works and the options that it offers, most notably the link on display that says “Expand” if you currently see no tiles, and “Collapse” if you do. Those tiles—which can show anything from switching to Tablet Mode, getting to the Settings application, connecting to the internet—take up a considerable amount of space when they are expanded. You’ll probably already have gotten the hang of that if you’ve been using Windows 10 for a while, but others who haven’t can often be confused with what is happening here and assume it’s changed after a Windows software update—and one that they wish they could revert. If you’re missing some options from the Action Center that you’re used to seeing, it’s probably because you need to click on the little link that says “Expand.”

Mathew is a qualified Microsoft Windows systems administrator (MCSA) who has covered OSs, browsers, the internet, and related tech since 2011. He is the founder and editor of ConsumingTech.com and is a freelance tech writer for various publications around the Web. Mathew graduated from Lumify Melbourne in 2011. He grew up in Melbourne and lives in rural Victoria, Australia. Read Mathew's full biography. Mathew's social profiles: Twitter, Facebook, Mastodon, Instagram, LinkedIn, and GitHub.
« Install/Configure WinDBG for Blue Screen of Death Analysis» Delete Wireless Network Profile in Windows 10