Home » News » Classic Shell For Windows Is No Longer Being Developed

Classic Shell For Windows Is No Longer Being Developed

Not everyone has liked the changes that Microsoft has brought about to its Windows operating system over the years; few operating systems adjust as much as Windows has to date, which has meant often getting wholly revamped when a new version arrives, along with different navigation on how to use its existing features as they continue to adapt to changes in technology and try to give, at least what they think, is the optimal user experience.

The changes that Microsoft has done have sometimes been nothing short of blatant mistakes according to the average user as well: Windows 8 was an operating system that was meant to be the answer to the mobile boom we were witnessing—smartphones, smartphones everywhere!—but ended up with egg on its face, with most Windows users opting to give it a miss, either by reverting back to Windows 7, or after hearing about how bad it was, not updating at all. 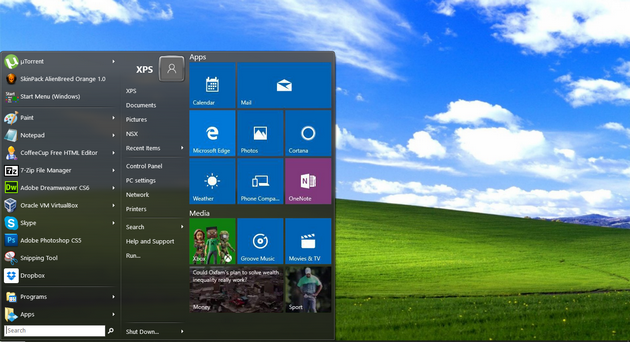 I wasn’t quite so critical of Windows 8 myself. I didn’t really appreciate the whole metro look all that much, but the operating system easily allowed users to switch it back to the traditional desktop mode just like Windows 7 had as its default navigation and design. All you had to do was click a button, and the standard Windows desktop and Start menu were back on your computer’s display. The main criticism in recent years, for me at least, was how much space the Microsoft Edge web browser takes up on the screen, which is too much on a Surface device, the same Surface device made by Microsoft. I can’t help but feel at least 5% of Google Chrome users are there because of the same reason. Why use a web browser that only offers considerably less of the actual web site you’re viewing when you could use something else like Chrome which takes up considerably less space? It is the website we’re interested in after all.

If you haven’t always liked Windows features over the years yourself, there have been some developers out there who have tried to keep you happy by making it possible to restore some of the older features, while still making it possible to use the updated version of the operating system. That’s ideal for everyone because it isn’t advised that you continue using very old versions of Windows just because you like the features; it can come at a cost, which is most often a security risk. The alternative of updating so you’re running the latest version of Windows and then installing something that allows you to restore some of the older features is, at least from a security standpoint, the better way to go about it.

Arguably the most popular way to customize the Windows operating system out of them all, Classic Shell, has sadly seen its last days of development, according to the developer, who posted the news on the Classic Shell forum a few days ago, citing a few reasons for his decision. The gist of it all was that it was starting to take up too much of his time and he wanted to spend that time working on other endeavors that aren’t always anything to do with developing. He also mentions that more recent versions of the Windows operating system are now getting updates more often than they used to, and that is making it harder for Classic Shell to continue to offer the features that it does. Each time one of the major updates rolls out for Windows 10, the developers of Classic Shell would need to put a lot of work in to update it and get it working on those newer software updates.

While it’s unlikely that Microsoft choosing to roll out software updates so frequently has anything to do with trying to stop the developments of such tools, it certainly is understandable that these guys can no longer manage to keep up with the demands of trying to maintain them as well. Microsoft has been focused on turning their attention to security for a while now, and that’s certainly part of what so many updates happening all the time is all about, just like it is for your mobile operating systems.

Classic Shell has been used by many people over the years, perhaps even as much as in the millions, so it’s a sad day in that regard. But at the same time, Windows 10 is a pretty good operating system and the nightmares that many people were experiencing with Windows 8 are now well and truly gone. Hopefully people manage to live without Classic Shell just fine going forward while at the same time, appreciate what it’s managed to do for so many people in days past.

Those who don’t think that they can live without Classic Shell for very long might like to check out some of the alternatives that are available and ready to install instead of calling it quits altogether—there are some decent alternatives out there already that have also been developed really well, and some of them can replace parts of what Classic Shell offered as well. If you’re still using Windows 8 and miss the Start menu from older versions of the OS, you can install the Pokki custom Start menu instead. It won’t be giving you what you the same design or layout for the Start menu like what was up for grabs in Windows 7, or even Windows Vista or XP for that matter; instead, it focuses on creating its own unique Start menu that Microsoft has never offered at all but is being enjoyed by many people and better than no Start menu at all. Spencer is another tool that you can install, only this time it does have an older version of Windows in mind, namely Windows XP and its Start menu. It isn’t perfect: you’ll need to pin Spencer to the taskbar rather than have it automatically override the existing menu button, but it’ll keep some Windows XP fans happy. StartIsBack is probably the closest thing to Classic Shell and offers lots of different customization options. It’s also still being developed so you can get Windows 10 features on older versions like Windows 8.

Mat Diekhake is the editor of ConsumingTech.com. He has been inseparable from the internet since Web 2.0 in 2005, and by 2008 decided on a career in IT. With a never ebbing desire to cover technology, he spends most days consumed by Windows, Linux, and Android in particular. Though he has spent innumerable hours learning consumer software in general, formally and as an autodidact, and has personally authored over 10,000 articles since 2010. He is a qualified Microsoft Windows systems administrator (MSCA). Read Mathew's full biography. Mathew's social profiles: Twitter, Facebook, Instagram, LinkedIn, and Github.
« Introducing Web Media Extension Package for Microsoft Edge» Early Returns on Firefox Quantum Point to Growth