You can become the root user of the Samsung Galaxy Tab 3 SM-T315T tablet when it is running on the Android 4.4.2 KitKat software updates by installing the CF-Auto-Root tool. The CF-Auto-Root installs and enables Chainfire’s SuperSU which is the same version of SuperSU that you normally get when you flash it from a custom recovery image. The hard part is getting it installed.

The CF-Auto-Root tool needs to install a modified cache partition and a modified recovery partition which then allows for the enabling of the SuperSU.

Here is everything you need to root the Samsung Galaxy Tab 3 SM-T315T running on the Android 4.4.2 KItKat software updates.

3. Unlock the Developer options menu and then enable the USB debugging mode on the Samsung Galaxy Tab 3 SM-T315T so you can make changes to the Android software that is running on the tablet—a requirement before rooting.

4. Install the Samsung USB Drivers on the computer so that the tablet can be detected by the flashing tool.

5. Boot the Samsung Galaxy Tab 3 SM-T315T into the Download Mode and connect it to the computer with the USB cable.

6. Check that Odin shows a blue or yellow color coming from the ID: COM port and gives the added message from the log. 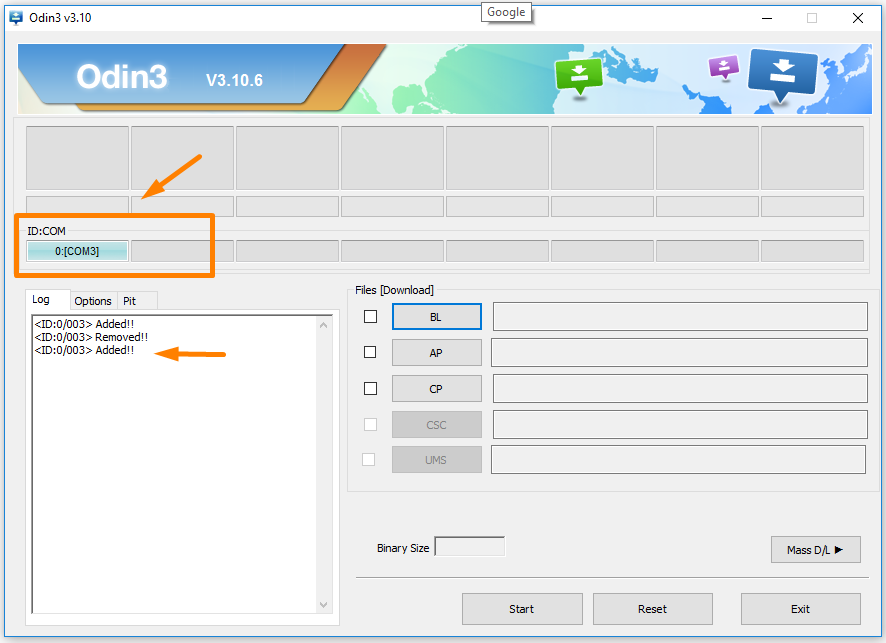 7. Click on the AP button and then browse through to the Downloads folder and select the rooting file found inside the extracted folder.

8. Click on the Options tab next to the Log and check that it shows Auto Reboot and F. Reset Time boxes checked but nothing else. Make sure you leave it the same as these default settings already show. Moreover, do not touch anything from the Pit tab.

9. Click on the Start button and the rooting of the Tab 3 begins. The first thing you notice is the modified recovery being installed.

10. The next thing that happens automatically is the modified cache is installed. You do not have to press anything at all.

11. You then get the reset message. The Samsung Galaxy Tab 3 can reboot a few times before it gives a pass message.

12. You know it is complete when you get a green box with the pass message available on the top left side. The Log also shows that it did not fail.

In conclusion, that is how to root the Samsung Galaxy Tab 3 SM-T315T tablet running on the Android 4.4.2 KitKat software updates. The SuperSU app is now available from the app drawer, and it is the app that makes you the root user. Don’t delete it or else you cannot install the root apps from Google Play and sources online. The root apps are now available to be installed right now. Anyone who decides that want to unroot the Samsung Galaxy Tab 3 can open the SuperSU app and visit the Settings page. Scroll down until you get to the option that says it will completely uninstall SuperSU from the mobile device.

Mathew Diekhake is a certified Microsoft Systems Administrator from Australia and also the founder and editor of ConsumingTech.com. With a never ebbing desire to cover technology, he is mostly consumed by Windows, Linux, and Android. However, he has spent stacks of hours learning about a variety of computer software, both formally and informally, and has authored tens of thousands of tutorials and news articles since 2011. Mathew has obtained many Microsoft certificates and is a qualified sysadmin (MSCA). Read Mathew's full biography. Mathew's social profiles: Twitter, Facebook, Instagram, LinkedIn, Github
« How to Find Voice Recorder App Saved Files in Windows 10 [Tutorial]» How to Remove Windows Defender Permanently in Windows 10 [Tutorial]