Google has had a lucky break over the last few years. With the rise of ad blocker software blocking out Google’s ad revenue, it would’ve potentially been in lots of trouble if that ad block plugin was coming from Internet Explorer. As it turns out, Microsoft decided to step away from what was comfortably the world’s most used web browser in Internet Explorer and create a new one called Edge. Unfortunately for the Redmond company, the traffic hasn’t jumped over to the newer version called Microsoft Edge like they would have assumed that it would. Instead, it’s now Google Chrome that is by far the most used web browser, and it’s not close, even when you combine the Internet Explorer and Microsoft Edge usage together.

Now that Google Chrome controls the world’s web browser usage, it could quite easily disallow ad block plugins if it wanted—and it probably will come to that soon if we were to guess. Perhaps that could be one of the ways Microsoft Edge starts getting new traffic coming in, but we wouldn’t count on it now that the word is out Google Chrome is good and it’s the web browser that people have gotten familiar with knowing how to use—saved passwords, cookies and other things alike all play a role in people wanting to go back to the browser they were using.

Regardless of the guesses about Microsoft Edge’s future, one thing that is for sure is that Internet Explorer isn’t being developed anymore and it’s time to look for another web browser solution for your computer to be the gateway to the internet for you. Pretty soon Internet Explorer will become a security hazard.

How to Turn On or Off Internet Explorer in Windows 10

Open up the optional Windows features dialog box. The Windows Features dialog box doesn’t open with much showing, so you can expand it by hovering the mouse over the bottom edge and then clicking and dragging it if you like. The Internet Explorer options that you want isn’t far from the top of the window.

Now just look for the “Internet Explorer 11” entry. It’ll have a checkbox next to it. By default the Internet Explorer 11 is turned on, so you’ll already see a checkmark in that checkbox. Deselect it by clicking in the box where there is the tick. 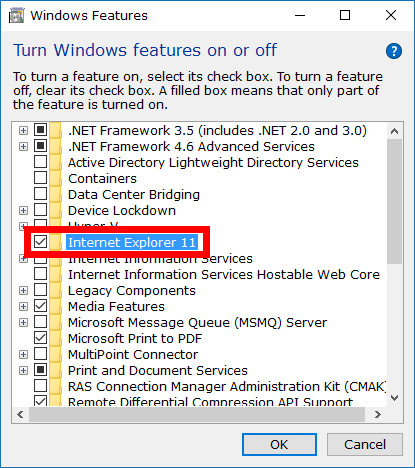 It’ll prompt you with a message letting you know that by turning off the Internet Explorer 11 browser you might affect other Windows features. It’s mostly a bit of a bluff. You shouldn’t have any issues when turning off IE 11 apart from things that are directly related to it. Click on the “Yes” button to continue with turning it off and then it’s off immediately. 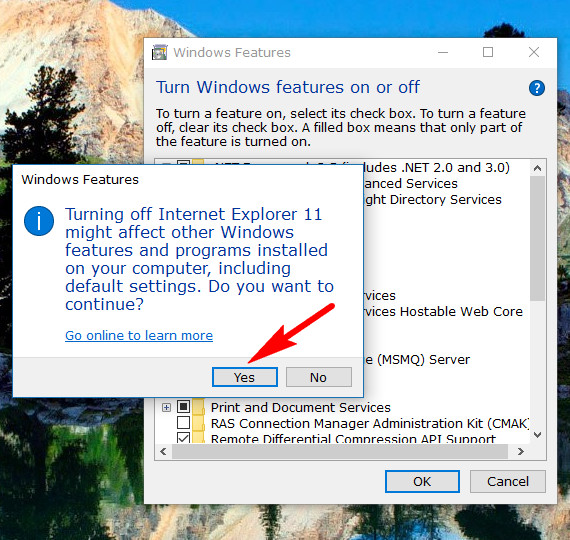 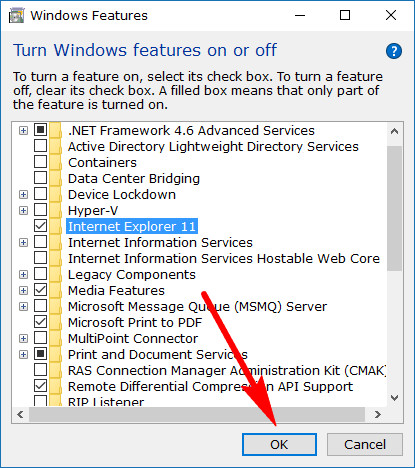 There’s no reason to worry about making sure Internet Explorer is completely uninstalled from the computer; a web browser doesn’t really take up that much disk space for it to be worth your time thinking about. Even if you wanted to, there’s no way to completely uninstall it from Windows 10 unlike some sites claim. What you can do though is disable it so that it can’t be accessed, and that is what the guide above teaches you.

Mathew is a qualified Microsoft Windows systems administrator (MCSA) who has covered OSs, browsers, the internet, and related tech since 2011. He is the founder and editor of ConsumingTech.com and is a freelance tech writer for various publications around the Web. Mathew graduated from DDLS Melbourne (now Lumify). He grew up in Melbourne and lives in rural Victoria, Australia. Read Mathew's full biography. Mathew's social profiles: Twitter, Facebook, Mastodon, Instagram, LinkedIn, and Github.
« Synchronize Clock to Internet Time Server in Windows 10» Enable/Disable Action Center in Windows 10