Windows 11 build KB5004745 is the second update so far for Windows 11, so some significant changes are being made, as you would expect because Windows developers are still getting lots of feedback on all the new changes implemented since Windows 10.  This build comes with a new search field in the Start menu, new Power Modes for the Windows Settings, and enhances the taskbar. 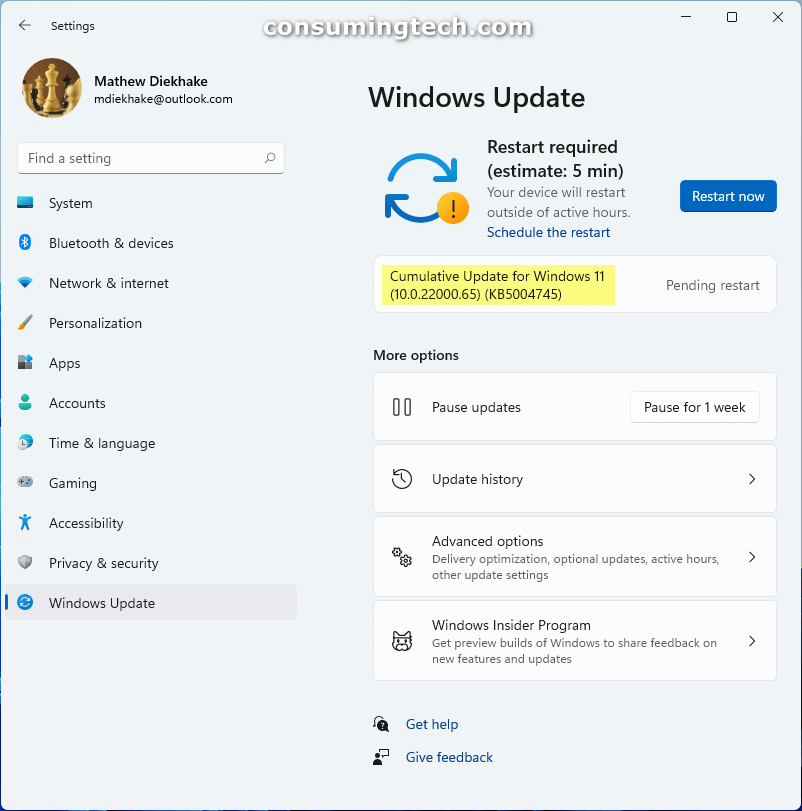 The highlight of this update is the new search field in the taskbar which helps make navigating the new menus easier. While the search box was never in the Start menu in Windows 10, it is more difficult to think of the Windows 11 Start menu as the Start menu since no longer are you immediately met with the traditional Start menu’s list of all apps as you were with Windows 10. Moreover, the search box is no longer in the taskbar as a box; instead, you have to click on the Search icon first.

It is a lot to get used to and no doubt some feedback has contributed to the Windows developers adding the search field in the Start menu to help reduce the confusion some people were having. That said, once you begin typing in the search field via the Start menu, it simply switches over to the search box that you would find after clicking on the Search icon.

An example of the new search field in the Windows 11 Start menu:

If you are signed up to the Dev channel, you can expect to find this update rolling out to your computer in the coming days. According to the Windows Update page, the update won’t take more than five minutes to install.

Mat Diekhake is the editor of ConsumingTech.com. He has been inseparable from the internet since Web 2.0 in 2005, and by 2008 decided on a career in IT. With a never-ebbing desire to cover technology, he spends most days consumed by Windows, Linux, and Android in particular. Though he has spent innumerable hours learning consumer software in general, formally and as an autodidact, and has personally authored over 10,000 articles since 2010. He is a qualified Microsoft Windows systems administrator (MSCA). Read Mathew's full biography. Mathew's social profiles: Twitter, Facebook, Instagram, LinkedIn, and Github.
« Chrome 92.0.4515.159 Addresses Nine New Security Vulnerabilities» NVIDIA – Display – 27.21.14.6275 for Windows 11