Windows 10 has released Cumulative Update Build 21390.1000 (KB5004071). This specific update doesn’t bring any new features. Instead, it’s said to be testing the servicing pipeline once again. Testing the servicing pipeline has been happening a lot lately and apparently it’s going to become a regular thing, at least for a little while, citing a need to test the process of releasing multiple Cumulative Updates on top of each other on top of the same build as the reason. 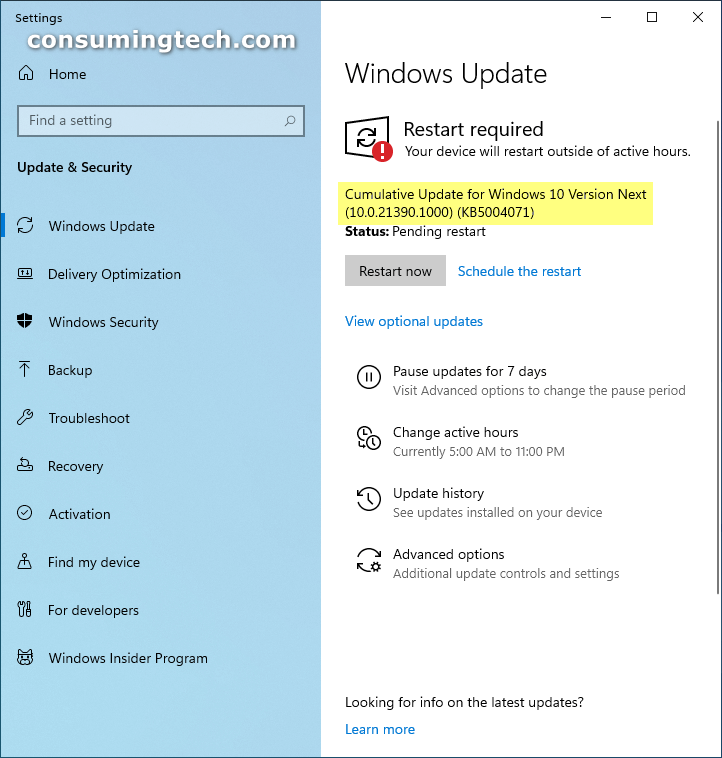 However, Microsoft has listed the features you get with build 21390 in general. You can read them below.

Note that this might be the last Windows Insider update we see for a few weeks. The news about more servicing pipeline updates is planned to begin immediately and will last for at least a few weeks. If you wanted to check out some other operating systems or Linux distros, now might be a good time to do it.

The following changes and improvements are found in version KB5004071

The following fixes are found in version KB5004071:

There are also some known issues in version KB5004071:

Mat Diekhake is the editor of ConsumingTech.com. He has been inseparable from the internet since Web 2.0 in 2005, and by 2008 decided on a career in IT. With a never-ebbing desire to cover technology, he spends most days consumed by Windows, Linux, and Android in particular. Though he has spent innumerable hours learning consumer software in general, formally and as an autodidact, and has personally authored over 10,000 articles since 2010. He is a qualified Microsoft Windows systems administrator (MSCA). Read Mathew's full biography. Mathew's social profiles: Twitter, Facebook, Instagram, LinkedIn, and Github.
« Opera 76.0.4017.177 Solves Ad Blocking Inconsistency on YouTube» KB5003254: Cumulative Update for .NET Framework 3.5 and 4.8 for Windows 10 Version 21H1