The Opera browser has been updated to version 76.0.4017.177. This version has solved the problem where the default Opera ad blocker wouldn’t block YouTube ads.

While it may have seemed this was some kind of partnership between Opera and Google, that isn’t the case; it was only a problem that needed a fix in the next release and it should now be resolved for everyone. 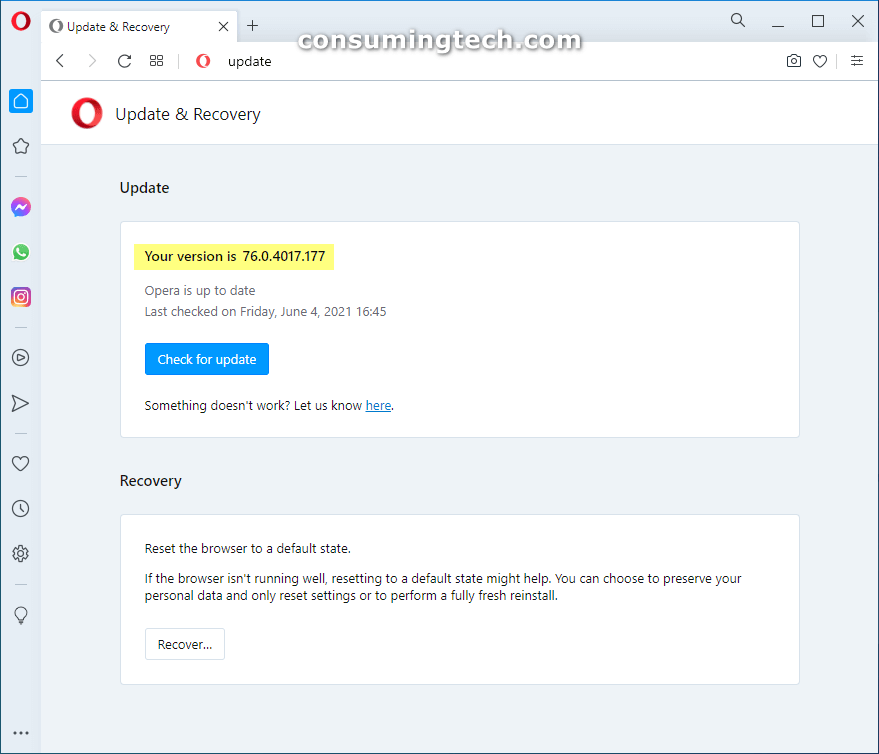 Opera also acknowledged that the browser wasn’t blocking all ads when the ad blocker was “working,” which is why some users would find the ad blocker working for some ads but then showing some others.

There are still quite a few users who suggest Opera still has some problems that need addressing in future builds. One user says Opera will randomly display different tabs between workspaces. Another user says there is a problem with the Hieroglyphs on the Bookmarks page which should have been addressed by now but wasn’t. You can probably expect a fix for these problems in the next release.

To update Opera, open the browser and click on the Opera icon in the top left corner and then click on the Update and Recovery link. The Opera browser will then automatically check for updates. Note that Opera will also update itself in the background when you have the browser closed, so you may find it already updated by the next time you open the browser.

Mat Diekhake is the editor of ConsumingTech.com. He has been inseparable from the internet since Web 2.0 in 2005, and by 2008 decided on a career in IT. With a never ebbing desire to cover technology, he spends most days consumed by Windows, Linux, and Android in particular. Though he has spent innumerable hours learning consumer software in general, formally and as an autodidact, and has personally authored over 10,000 articles since 2010. He is a qualified Microsoft Windows systems administrator (MSCA). Read Mathew's full biography. Mathew's social profiles: Twitter, Facebook, Instagram, LinkedIn, and Github.
« Firefox 90.0b3 Brings Fixes and Improvements» Windows 10 Cumulative Update Build 21390.1000 (KB5004071) Tests More Servicing Pipeline