Set Up ‘Out of Office’ Reply in Windows 10 Mail

I currently reside in a house within walking distance to one of the more popular beaches in my area. It is a place where location is of more importance than anything else, a place where housing is expensive but if you had the same thing a few hours further inland, it would be one of the cheapest houses in the nation at the moment. There are no jobs around here that pay well or that are mentally rewarding to do unless you have an interest in cooking Fish & Chips or packing shelves. I don’t have enough money to somehow move out of this area closer to the city to find a job there.

People underestimate the difficulties of somehow setting yourself up somewhere before getting the job that will eventually pay you—even Michael Jordan once said to Charles Barkley “Don’t give that homeless man money, if he can ask you for five dollars, he can say Hello welcome to McDonald’s can I take your order.” It’s a comment that sounds true at first until you think for a few more seconds about its ignorance. The homeless man probably has about $5,000 of dental work to take care of, a home that he needs to start renting that has at least running water to shower with, some nice new clothes, etc. before he’ll be employable. It’s not the first thing Jordan has said that’s fallacious . . . most of what he said in that same interview was on a similar level: “bikes aren’t more dangerous on roads because it’s people who don’t pay attention that causes the most problems, not what you drive.” In other words, Mike had forgotten that cars could hit bikes.

There being no jobs or chance for me to get out of here without some type of aid had been a painful predicament until this summer when I decided I would stop trying to run away from what everyone else was willing to pay a lot of money to try to come to. I decided I would go to the beach every day, rain hail or shine, and enjoy more of the beach than any other living organism in my region apart from crabs. I went to the beach so often that my feet started stinging from the road imprints. I got to know the lifeguards, and what days I would come to expect what faces. I had learned when to expect crystal blue waters and when it would be murky. My inner thighs had gotten such large rashes I could hardly walk home and needed to research another use for petroleum jelly. I had lived my summer to a point where it was no longer enjoyable, and considerably past the point of the average upper-middle-class family wishing they could only stay a few more days and continue doing what they were doing. I had reached a point that few people have. I had been to the beach so much that the beach had lost its value.

For at least a little while longer getting up and heading down to the beach is something I can do still with my computer on, but for many others, it’s something that required packing up and heading hours away from the family home. It’s also a time when people often don’t want to be collecting work-related emails and having to reply to them—they want their holiday free from work and for it to be a period when they can focus a lot of “me time” instead.

Just about all the big names in email will offer you the chance to set up an automatic message when you’re ready to go away on holiday so that it replies to the sender with a message that you had already preplanned. That way you can let them know that you’re not currently returning emails and that you’ll get back to them shortly or at a time you specify you’ll be back. The Windows 10 Mail application allows for this feature as well, so it doesn’t matter what email you’re signed up to as long as it’s owned by Microsoft or a big player in the industry—Outlook, Live, Hotmail, Office 365, Gmail, Yahoo, etc.—you can set it up directly from your Mail app.

You can set up an “out of office” reply for your email accounts that have been set up with the Windows 10 Mail application by heading to the Start menu > Mail app and then clicking on the “Settings” gear icon once you’ve got the Mail app open. 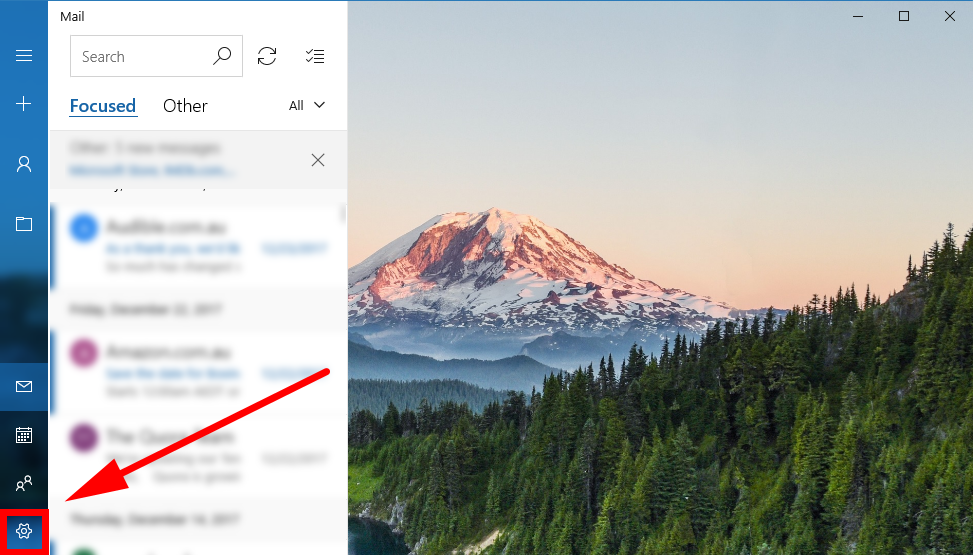 You’ll then see the different links available in the right side pane of the Settings app. Click on the one that says “Automatic replies” to get the chance to send your automatic messages. 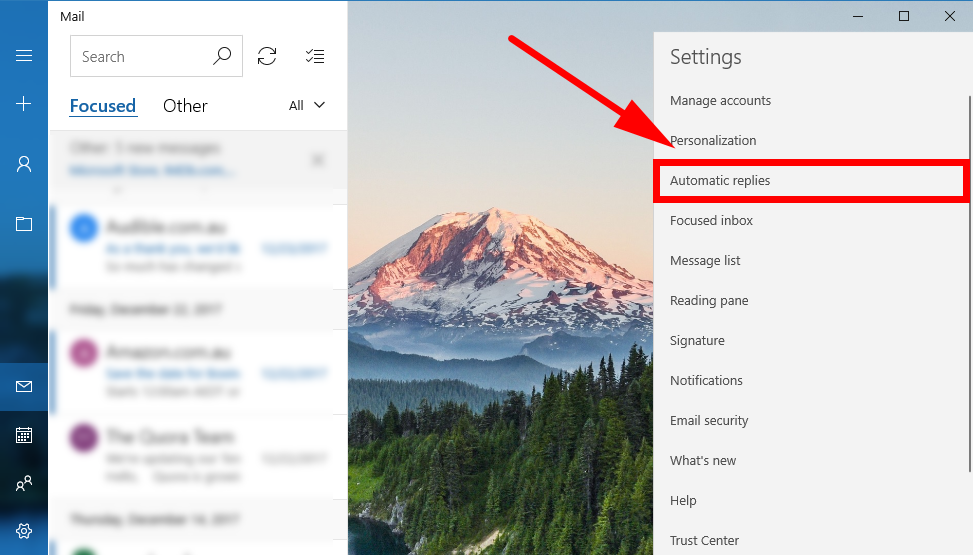 The first thing you need to do is select the email account that you want. If you’ve got more than one, then click on the drop-down menu and select the one of your choice as they’ll all be listed in here.

Next is the toggle that actually turns it on. You’ll need to click on it and shift it over to the “On” position. When you do it then gives you the chance to write what your message is going to be. Write whatever you want with the understanding that as soon as anyone sends you an email, it will be what you write here that they will receive.

If you’re not using this Mail app just for work-related purposes, then you might also want to check the box for “Send replies outside of my organization.” In other words when you get email from a recipient who is not known to Windows as someone you work with. 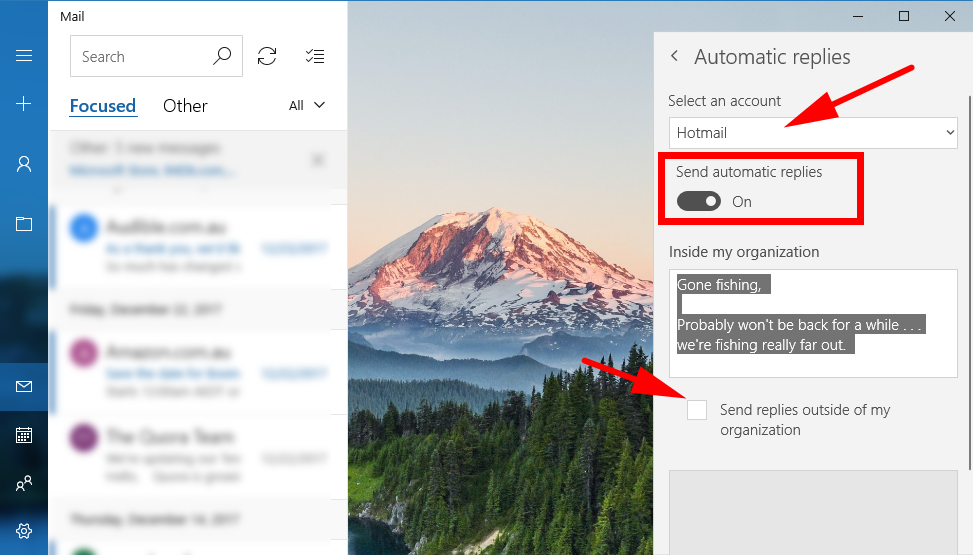 You’ll need to fill in the message again if you have selected the option to send replies to people who are outside of your organization. It also opens up the opportunity to write something different if you prefer. 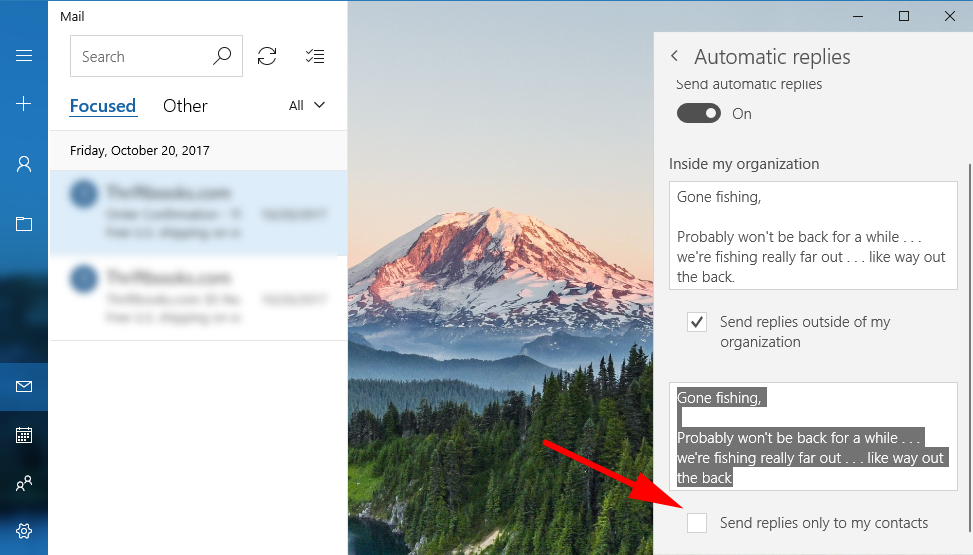 You can now close the Mail application, and it’ll be all setup and ready to go for whenever you get your next email. When you get back home, and you’re ready to start accepting emails on the fly again, you’ll see a ribbon at the top of the Mail app once you open it, and one of the buttons is to turn it off. Just click on that “Turn off” button, and it’ll stop sending the automatic replies. If you dismiss that notification, however, then you’ll need to click on the Settings > Automatic replies and turn it off manually from the same area you set it up in the first place instead. 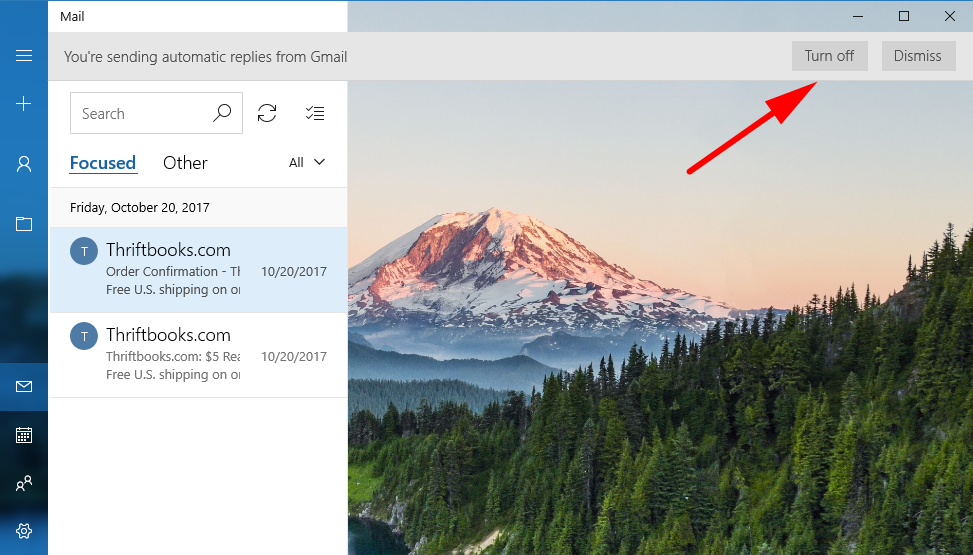 There’s no way of specifying a particular date to begin and end the automatic replies, but that’s nothing new outside of the Windows 10 Mail app either. The features you get offered here are actually pretty good compared to just other clients on their own—it’s a better experience than the default Gmail application in our experience, for example.

Mathew is a qualified Microsoft Windows systems administrator (MCSA) who has covered OSs, browsers, the internet, and related tech since 2011. He is the founder and editor of ConsumingTech.com and is a freelance tech writer for various publications around the Web. Mathew graduated from DDLS Melbourne (now Lumify). He grew up in Melbourne and lives in rural Victoria, Australia. Read Mathew's full biography. Mathew's social profiles: Twitter, Facebook, Mastodon, Instagram, LinkedIn, and Github.
« Check if System Drivers are Digitally Signed in Windows» Delete Volume or Partition in Windows 10