The Windows operating system has been through a cycle of being immensely popular, then not very well liked and is now gaining steam again with Windows 10. Many believe that Windows 10 is the best version of Windows yet, and we don’t necessarily disagree with those sentiments. It is very much like a blend of Windows XP and Windows 7 but then with the modern elements take from Windows 8 design—but not the layout—such as the tiles gleaming from the Start menu. 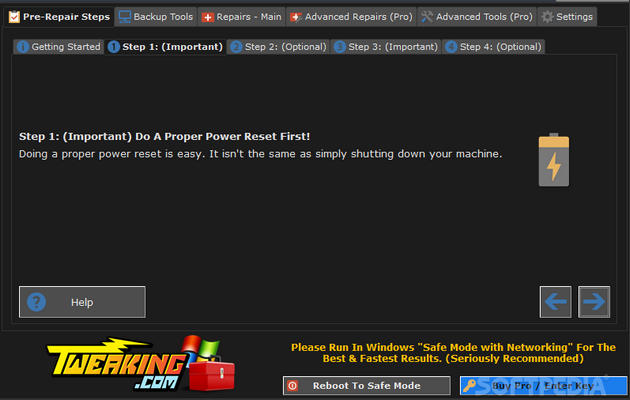 If you’re trying to troubleshoot problems to do with your operating system, then it’s always a good idea to use words that best describe your problem and then add the operating system version to the end of your query so you can get better-targeted results—for example, “how to fix _____ on Windows 10.” But even still there might be times when you just can’t seem to find the answer to your queries, or whatever solution you’ve found doesn’t seem to have any effect on your computer.

Once you open up the Windows Repair toolkit, you’ll see a Help button, Jump to repairs button, Go to step 1 button, Reboot to Safe Mode button, and another button to buy the pro version. The pro version of the tool adds an automatic update feature, a better drive cleaning tool, a memory cleaner, and will speed up your computer more than the free version would.

Both the free and the pro version of the Windows repair 4.0.12 toolkit are compatible with Windows XP, Windows Vista, Windows 7, Windows 8, Windows 8.1 and Windows 10. It will also work for all editions and versions of the said Windows operating system—so in other words, regardless of your software updates and whether you run Windows 10 Pro or Home, etc.

Many of you might already know that the Windows operating system comes with the chance to take a System Restore. Before you can do that you’ll need to turn on System Protection (and change the System Protection max storage size if necessary) if your computer doesn’t have it turned on already. System Protection will start taking restore points for you which can then be used to wind back the clock on the operating system, often allowing people to bypass whatever problem they have created or stumbled upon. If you’re unable to get the Windows Repair toolkit to solve your computers problems, then try restoring the operating system to an earlier date (remembering that you’ll lose any files that you’ve added between the date you’re restoring to and now unless you back them up beforehand).

There are some comments on the internet suggesting that this file may contain a virus or viruses. The reason they are saying this is because their antivirus software is being set off to indicate that there is a Trojan being found. VirusTotal also shows a few files out of the many that may be Trojans. These software tools are to be used as a guidelines only. This is one of the cases where the tool is safe to use but the software suggests there might be some issues with Trojans. It happens from time to time.

Mat Diekhake is the editor of ConsumingTech.com. He has been inseparable from the internet since Web 2.0 in 2005, and by 2008 decided on a career in IT. With a never ebbing desire to cover technology, he spends most days consumed by Windows, Linux, and Android in particular. Though he has spent innumerable hours learning consumer software in general, formally and as an autodidact, and has personally authored over 10,000 articles since 2010. Microsoft awarded him numerous certificates resulting in him becoming a qualified Windows systems administrator (MSCA). Read Mathew's full biography. Mathew's social profiles: Twitter, Facebook, Instagram, LinkedIn, Github, Reddit.
« How to Format New Hard Drive in Windows 10 [Tutorial]» How to Turn On/Off Startup Sound in Windows 10 [Tutorial]