About ten years ago I was really into music . . . there were loads of great bands that I liked that weren’t all that mainstream.

In recent years those same bands were struggling, breaking up, seeing many members come and go,  and much like all other industries, only the elite seem to be the ones keeping their heads easily above water.

It might be why one of my favorite bands at the time, Evergreen Terrace, went from singing lyrics like “Looks like we finally made it” to “I want to know what keeps me hanging on” in that order. . . .

Subsequently, the quality of music in the genre that I loved has diminished, and it’s now just bands that purposefully cater to the majority of ears that are leading the way, and it’s typically sounds I’m not all that interested in listening to that are garnering all the attention.

As such, I don’t do a lot of listening to anything apart from the ocean outside my window, where I work mainly of a night. That combined with my tinnitus is about all my head could manage while working most of the time anyway. And thank goodness that computers are now considerably quieter than they used to be or my production may be well down—I’m still not really sure how writers used to be able to work—or occasionally still do—from typewriters.

While not quite as pleasant as full songs, the Windows operating system has always played certain sounds, and your head might have gotten familiar with them without even knowing it.

How to Turn On/Off Startup Sound in Windows 10

You can turn the startup sound on or off from the Sound options directly from the icon itself in the taskbar. To see what I mean, look for the sound icon in the taskbar, and then right-click on it and select “Sounds” from the menu, as shown in the screenshot below.

It’ll automatically open up with the Sounds tab open. Leave it there and look for the “Play Windows Startup sound” checkbox toward the bottom of the window. A checkmark in this box means the computer will play a startup sound when the Windows operating system is booting. Make sure you click on the “OK” button to apply the changes and close the Sounds window after you’ve made your choice so that it is saved. 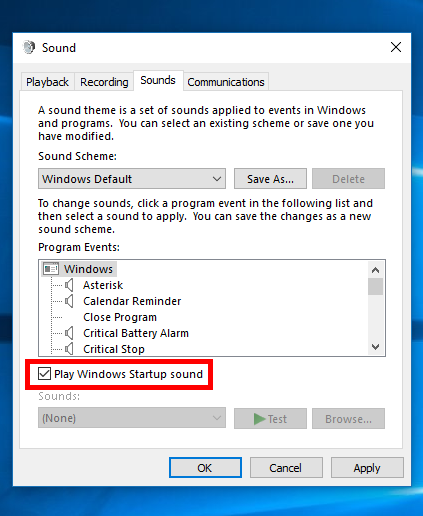 Microsoft chose not to allow users to be able to change many of the sounds freely in Windows 10. Instead, the changes needed to be done from within the Windows Registry. The option of playing a sound at startup, however, has thankfully not been removed from just the basic Windows sound settings that we can adjust whenever we want and without too much work.

Mathew is a qualified Microsoft Windows systems administrator (MCSA) who has covered OSs, browsers, the internet, and related tech since 2011. He is the founder and editor of ConsumingTech.com and is a freelance tech writer for various publications around the Web. Mathew graduated from Lumify Melbourne in 2011. He grew up in Melbourne and lives in rural Victoria, Australia. Read Mathew's full biography. Mathew's social profiles: Twitter, Facebook, Mastodon, Instagram, LinkedIn, and GitHub.
« Download Windows Repair (All In One) 4.0.12» Extend Volume/Partition in Windows 10