Miracle Box is a computer application developed by amiraclebox.com that can flash firmware to mobile devices that have a range of different system chips. This is different to many other flashing tools out there that typically only cater to one manufacturer or brand of chipset.

While you won’t be able to use the Miracle Box software for flashing firmware to every smartphone out there, it will work for copious devices that have MediaTek and Spreadtrum chipsets, as well as other devices that have an RDA or Coolpad CPU (central processing unit). 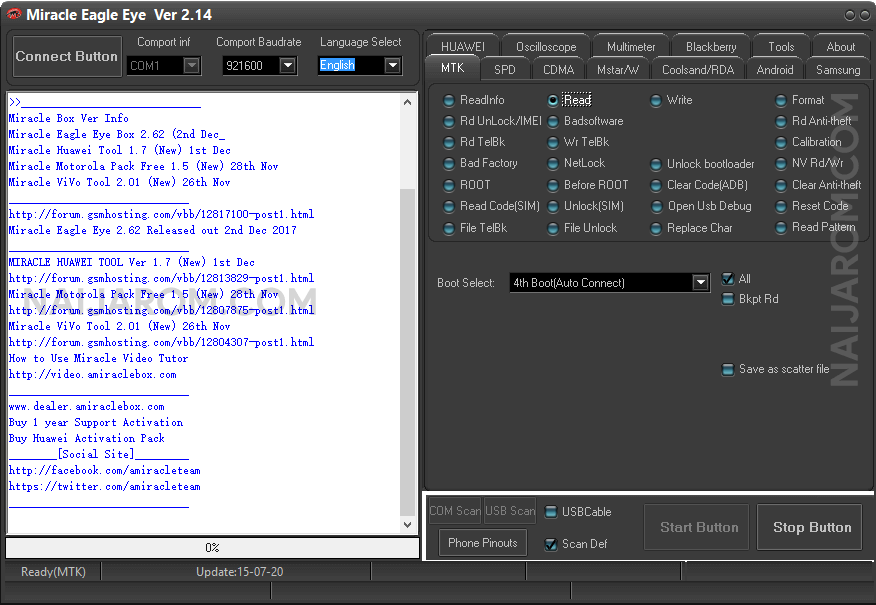 Miracle Box doesn’t get its name from only being a tool that can flash firmware for multiple chipsets either. There are some other tricks it has up its sleeve, such as the ability to flash the IMEI to a device, read the IMEI, read the unlock codes and device information, read the SIM, read the Telbk, factory reset, root the device so you have full system access, and more.

The Miracle Box v2.14 tool can run on Windows-based computers ranging from Windows 10 and down through the older versions including Windows 8.1, Windows 8, Windows 7, Windows Vista, and the much beloved Windows XP that is still running on some people’s machines.

As with most tools out there for Android, Miracle Box comes in a few different versions. If the current version doesn’t work for your device, then you might want to test out one of the older versions instead, and see how it goes. Typically speaking, the newer version of a tool should be compatible with more devices, and you can expect some bug fixes too. But on occasion, the most recent version of a tool can let some people down, and that’s when it’s best to try an older version before giving up.

If you try using the Miracle Box software and it doesn’t work for you, and yet you know that you do have a MediaTek or Spreadtrum system chip, you can try using the Smartphone flash tool (for MediaTek) or the Spreadtrum upgrade tool (for Spreadtrum) and see how things pan out. Just be sure to flash the firmware using a flashing tool that is made for your chipset.

In order to download the Miracle Box 2.14 tool, head over to this link: miracle_box_v2.14 .zip

Mathew Diekhake is a certified Microsoft Systems Administrator from Australia and also the Founder and Editor of ConsumingTech.com. He is Windows and Android obsessed but has spent stacks of hours learning about a variety of computer software, both formally and informally. Mathew has obtained many Microsoft certificates and is a qualified Systems Administrator (MSCA). Read Mathew's full biography. Mathew's social profiles: Twitter, Facebook, Instagram, LinkedIn, GitHub.
« New Google Sign-in Screen Launching This Week » Download Motorola Device Manager (All Versions)