Earlier versions of Windows operating systems that people loved like Windows 7 came with the search box available from the Start menu, meaning you needed to click on the Start menu before it becomes available to use. The more modern Windows 10 has put the search box in the taskbar instead, so it’s available to you quicker—it no longer requires a click from the desktop or a click when you are browsing the web since the taskbar is visible for most of what you do on a computer.

Part of the reason for so much Windows 10 love from users is Microsoft has given so many ways to do things, but using search isn’t one of them. If you decide to remove the search box from the taskbar, then you have no other way of searching. The search box offers a way for you to search for just about anything that the computer has to offer with its great search index, assuming you haven’t disabled stuff from it already. Some people opt to optimize the search index by removing locations from the search index, so they are no longer getting pulled in the results. It’s fine if you do that but you’ll be taking away from the search experience.

Just because the search box is a useful tool for most people most of the time doesn’t mean it’s going to suit everybody, so Microsoft has given an option to remove the search box from the taskbar if you prefer. Sometimes people have lots of icons on the taskbar and no room for the search box given that the icons take a greater priority, while others want to block other people from searching files on their computers temporarily.

Your computers that run WIndows 10 show the Cortana icon in the search box like the example below shows in the image. To remove the search box so that it only shows Cortana, right-click the mouse on the taskbar.

Next hover the mouse over the “Cortana” entry from the menu, and you’ll see that it currently says that it is set to show the search box. 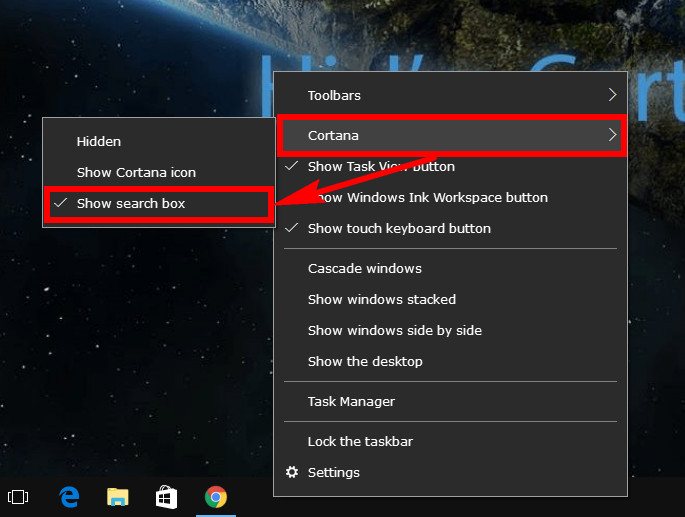 Click on the “Show Cortana icon” entry from the same menu instead, and you then have the search box removed with Cortana still available from the taskbar.

You’ll see the Cortana icon on your computers like so.

Right-click on the taskbar again and then hover over the “Cortana” link and click on the “Hidden” option from the secondary menu if you want the Cortana icon removed as well. 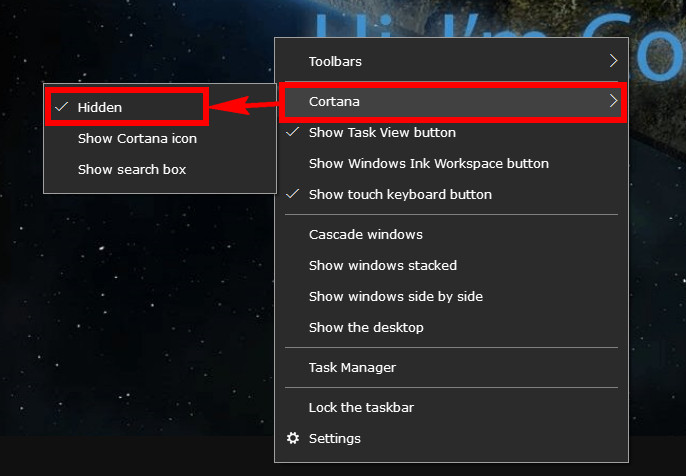 Cortana was one of the most talked about features that Windows 10 had on offer, but after a couple of years experiencing Windows 10, most people don’t use her. Technically the search box that her icon sits in was referred to as the “Cortana search box” as well, but now it’s just the search box. Cortana isn’t vital to your Windows 10 experience being a good one, but the search box typically is for people who use Windows beyond saving some documents and using one of the many web browsers on offer to browse the web.

Mathew is a qualified Microsoft Windows systems administrator (MCSA) who has covered OSs, browsers, the internet, and related tech since 2011. He is the founder and editor of ConsumingTech.com and is a freelance tech writer for various publications around the Web. Mathew graduated from DDLS Melbourne (now Lumify) in 2011. He grew up in Melbourne and lives in rural Victoria, Australia. Read Mathew's full biography. Mathew's social profiles: Twitter, Facebook, Mastodon, Instagram, LinkedIn, and GitHub.
« Turn On/Off Windows Defender Real-Time Protection in Windows 10» Add/Remove Items in All Apps in Windows 10 Start Menu