The following tutorial demonstrates how to enable and disable periodic scanning for Microsoft Defender antivirus when using alternative third-party antivirus programs as your main virus protection program when using a version of the Windows 11 operating system.

Earlier versions of Windows, even once it had already become a popular operating system, such as Windows XP and Windows Vista, did not provide any built-in antivirus programs that were managed and maintained by Microsoft. Back then, it was standard procedure for you to install third-party antivirus programs if you wanted your computer to be protected from the common computer virus. This seems unusual today given how many viruses did plague computers back in those days when the internet was so troubled with viruses that you would not dare use it without virus protection, even for five minutes, without worrying you had harmed your computer permanently. While Windows 7 did at least come with some form of basic protection, it too did not have built-in antivirus that could be sufficiently relied upon.

Thankfully things have changed. Windows 10 was the first version of Windows where you did not need to install alternative protection unless you had some special circumstances, which all advanced users do. In particular, there were still viable third-party choices for those looking for extensive malware protection. If we were to take a guess, it is only a matter of time before Microsoft starts paying closer attention to all forms of malware more closely and starts properly eradicating things like Potentially Unwanted Programs. For now, you are still going to have to install third-party programs to handle Potentially Unwanted Programs. But Windows 11 has been updated to include some features that make it more advanced antivirus in comparison to the Windows Security to be found on Windows 10. And one of those features is for there to be better interoperability between third-party antivirus programs and the built-in Windows Security.

In particular, Windows 11 has made it possible to continue using your third-party antivirus choices while still running the occasional Microsoft Defender scan via Windows Security, effectively doubling your protection. We recommended Microsoft allow for multiple antivirus programs at once when we wrote on Windows Security in Windows 10 because it logically seemed like it undoubtedly would enhance your security if you could have more than one program running at the same time which was impossible to do in those days. This feature is turned off by default, likely so as not to annoy people who had chosen to go with another antivirus provider besides Microsoft, but it is enabled very easily from the Windows Security interface.

You can enable and disable Limited Periodic Scanning directly from the Windows Seurity interface when in the Virus and threat protection section. Here is how to do that:

Note: You need to be signed in to an adminsitrator’s account if you are to be able to enable and disable Limited Periodic Scanning in Windows Security.

3. Click on the Microsoft Defender Antivirus options arrow in its top right corner to expand the section and then click on the toggle for Periodic Scanning to enable and disable it. 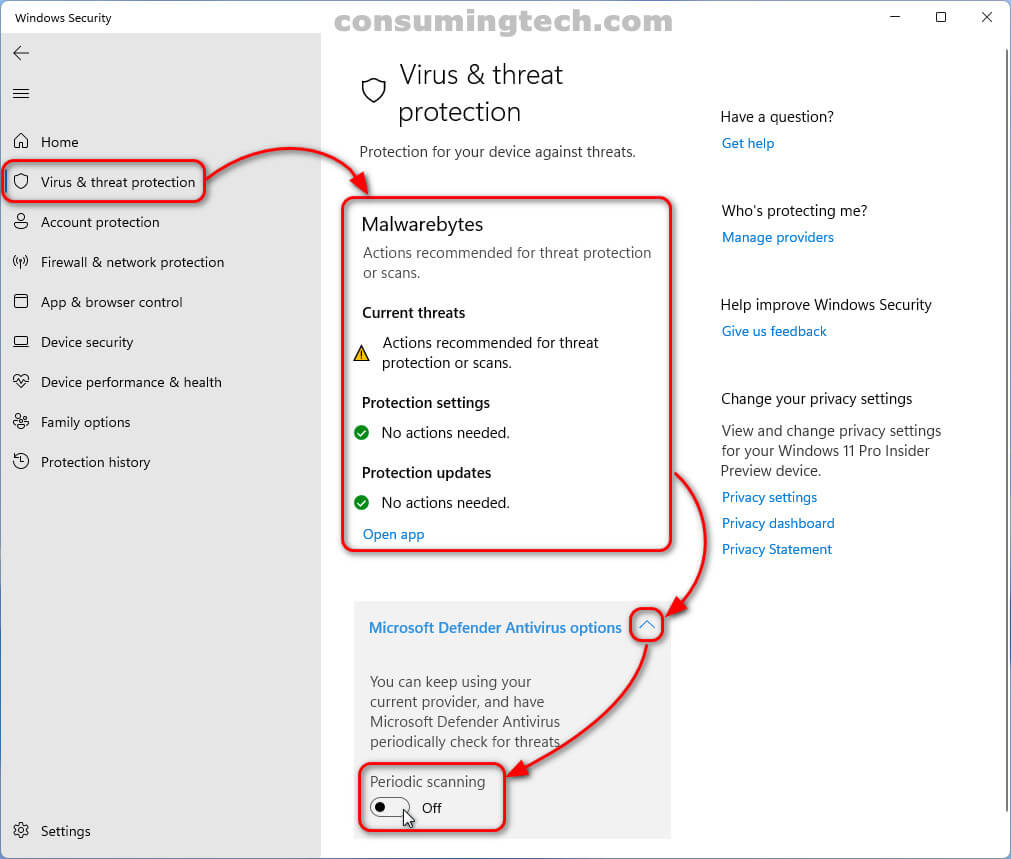 Note: When you want to turn Microsoft Defender Antivirus options’ Periodic Scanning off again, the section appears further down the page than it originally did. At the time of writing this, it appears under the Ransomware protection section. They have done this to keep it out of the way of the other features once it is already enabled, but the drawback is some people may not be able to find it again if it is not in the same place it was before. Thus, it is not out of the question Microsoft moves this at a later date to make it easier to find. 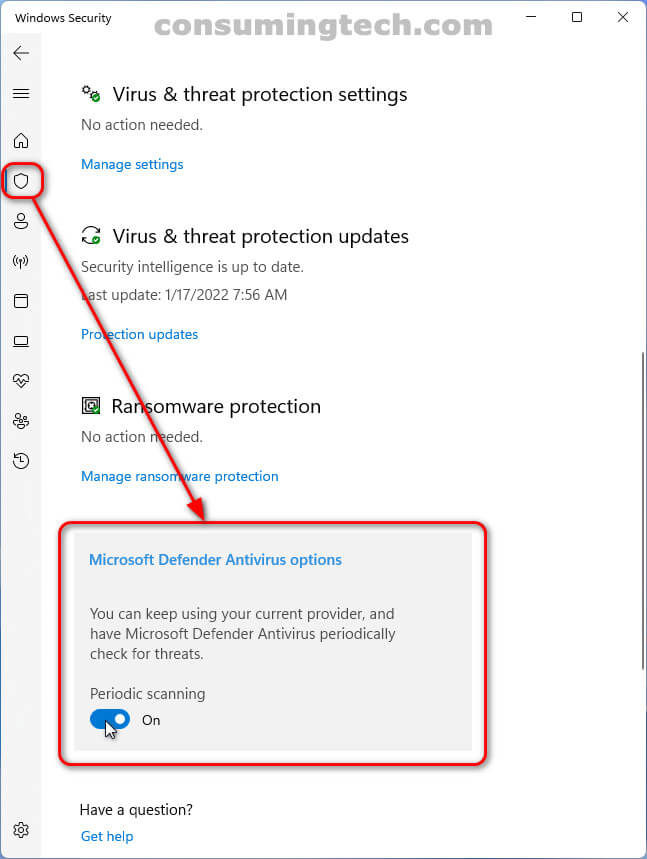 In conclusion, that is how to enable and disable Periodic Scanning in Microsoft Defender Antivirus in Windows 11. Though many will still be unaware of it, Windows 10 did come with reliable antivirus protection that ensured you did not need to install a third-party program to handle virus protection for you. Though we did use some malware protection to remove things like potentially unwanted programs, we were at ease using Microsoft Defender for keeping the computer safe from the type of infection you think is going to cause your computer to stop working, no thanks to a malicious program that is purposefully harming it. However, that did not mean everyone wanted to use Microsoft Defender, and one of the problems with that decision was that you could only ever use one antivirus program at one time. This created not just the problem of wondering whether or not your computer was protected adequately but also the wonder of was the computer protected at all during the times when you may be switching between programs. Though the latter question remains a bit of an enigma, it certainly helps to know that Microsoft Defender is alive and breathing even though you have other programs running at once.

Mat Diekhake is the editor of ConsumingTech.com. He has been inseparable from the internet since Web 2.0 in 2005, and by 2008 decided on a career in IT. With a never ebbing desire to cover technology, he spends most days consumed by Windows, Linux, and Android in particular. Though he has spent innumerable hours learning consumer software in general, formally and as an autodidact, and has personally authored over 10,000 articles since 2010. Microsoft awarded him numerous certificates resulting in him becoming a qualified Windows systems administrator (MSCA). Read Mathew's full biography. Mathew's social profiles: Twitter, Facebook, Instagram, LinkedIn, Github, Reddit.
« How to Set Up Fingerprint Recognition Sign-in for Account in Windows 11» How to Turn On/Off Tamper Protection for Microsoft Defender Antivirus in Windows 11