When you first open the Windows Terminal app you will notice the default size of its window is very similar to what you would expect to find in the old Command Prompt or even Windows PowerShell window. There is also a reason for this: When choosing a size for these windows, they are measured in columns and rows. A column in this instance is referring to how many character columns are displayed within the window.

This is the number of character columns displayed in the window upon first load. If launchMode is set to "maximized" or "maximizedFocus", this property is ignored.

This is the number of rows displayed in the window upon first load. If launchMode is set to "maximized" or "maximizedFocus", this property is ignored.

The following tutorial demonstrates how to change the Windows Terminal launch size when using a version of the Windows 10 oeprating system.

How to Change Windows Terminal Launch Size in Windows 10

4. From the right side of the same window, under the Launch size heading, click on the arrows for Columns and Rows to adjust the launch size window of the Windows Terminal app to the size you want and then click on the Save button to save the changes.

Note: The default launch size for the Windows Terminal app is 120 for Columns and 30 for Rows. 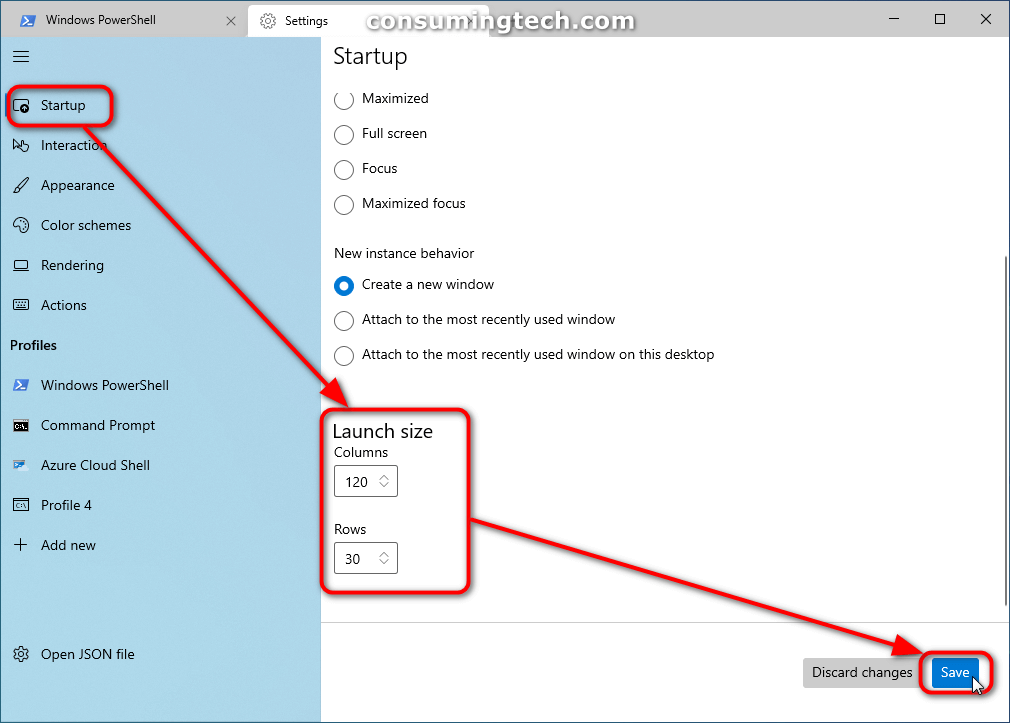 In conclusion, that is how to change the Windows Terminal launch size in Windows 10.

Mathew is a qualified Microsoft Windows systems administrator (MCSA) who has covered OSs, browsers, the internet, and related tech since 2011. He is the founder and editor of ConsumingTech.com and is a freelance tech writer for various publications around the Web. Mathew graduated from DDLS Melbourne (now Lumify). He grew up in Melbourne and lives in rural Victoria, Australia. Read Mathew's full biography. Mathew's social profiles: Twitter, Facebook, Mastodon, Instagram, LinkedIn, and Github.
« Turn On/Off Run Windows Terminal at Startup in Windows 10» Change Windows Terminal Launch Mode in Windows 10