Social media sites do a good job of offering people the option to use a Dark Mode should they so choose to deviate from the standard “light” mode you get with websites. This has become increasingly popular over recent years due to the rise of devices that run on batteries since the lighter colors demand more power from the device itself. If you really wanted you could also install extensions to make all websites you visit go dark, though we don’t recommend doing that because most websites haven’t been optimized for a Dark Mode unless they offer it themselves. Microsft also offers a general Dark Mode for its Windows 10 operating system. You might think the Windows Terminal app would be configured to follow whatever you choose for the general OS, but it has done a great job in offering as much customization to users as possible and one of the extra things you can do is choose a Light or Dark Mode purely for the Windows Terminal app itself, independently from the rest of the OS.

The following tutorial demonstrates how to chosoe between a light and dark theme for the Windows terminal application when using a version of the Windows 10 oeprating system.

4. From the right side of the same window,  under the Theme heading, select either the Use Windows theme, Light or Dark toggle to turn it on or off, or use the default selection made by the app itself.

5. After selecting to use the light or dark theme, click on the Save button at the bottom of the Settings page. (Click to enlarge the screenshot below.) 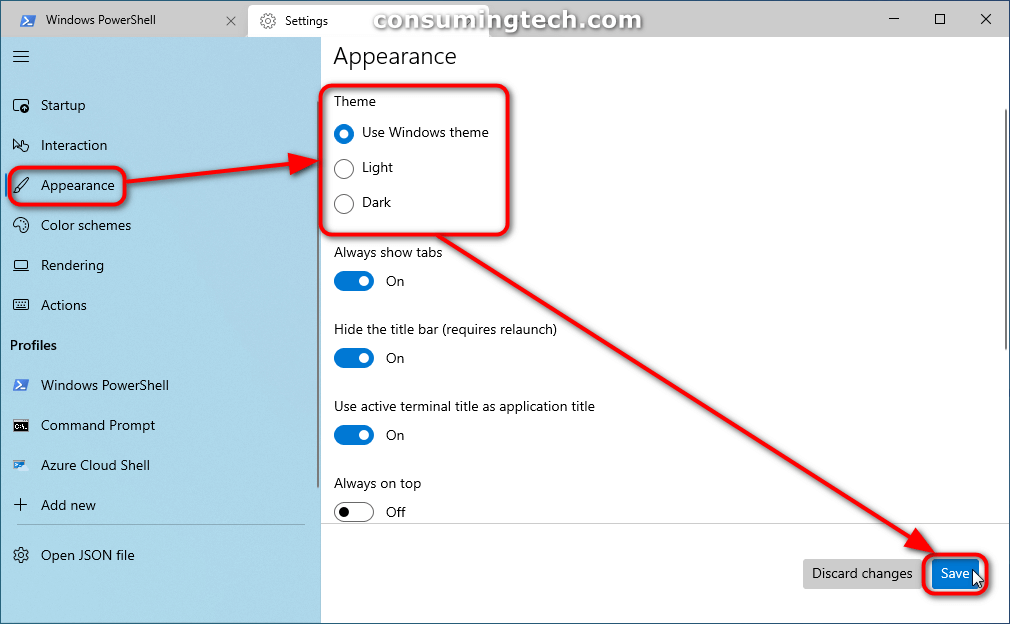 In conclusion, that is how to chosoe between a light and dark theme for the Windows terminal app in Windows 10.

Mathew is a qualified Microsoft Windows systems administrator (MCSA) who has covered OSs, browsers, the internet, and related tech since 2011. He is the founder and editor of ConsumingTech.com and is a freelance tech writer for various publications around the Web. Mathew graduated from DDLS Melbourne (now Lumify). He grew up in Melbourne and lives in rural Victoria, Australia. Read Mathew's full biography. Mathew's social profiles: Twitter, Facebook, Mastodon, Instagram, LinkedIn, and Github.
« Turn On/Off Use Active Tab Title on Windows Terminal Title Bar» Change Tab Width Mode in Windows Terminal App in Windows 10