The Windows Terminal app comes with an advanced settings menu, styled similarly to the main Windows 10 Settings but set apart in an area all of its own, and here you can always choose to add profiles if you wish. Nevertheless, for added convenience, you are also able to choose how many profiles you want to be made readily available directly from the Windows Terminal interface itself, from its own dropdown menu, which is located directly next to the last tab. The dropdown menu is distinguished from the tabs themselves thanks to its downward-facing arrow as a pose to the plus symbol for creating a new tab.

The following tutorial demonstrates how to hide and show profiles from the dropdown menu in the Windows Terminal application when using a version of the Windows 10 oeprating system.

3. Under the Profiles heading in the left pane, click on the profile (i.e., Windows PowerShell, Command Prompt, Azure Cloud Shell, et cetera), and then under the General tab on the right side of the same window, toggle on or off Hide profile from dropdown and click on the Save button to save your changes. 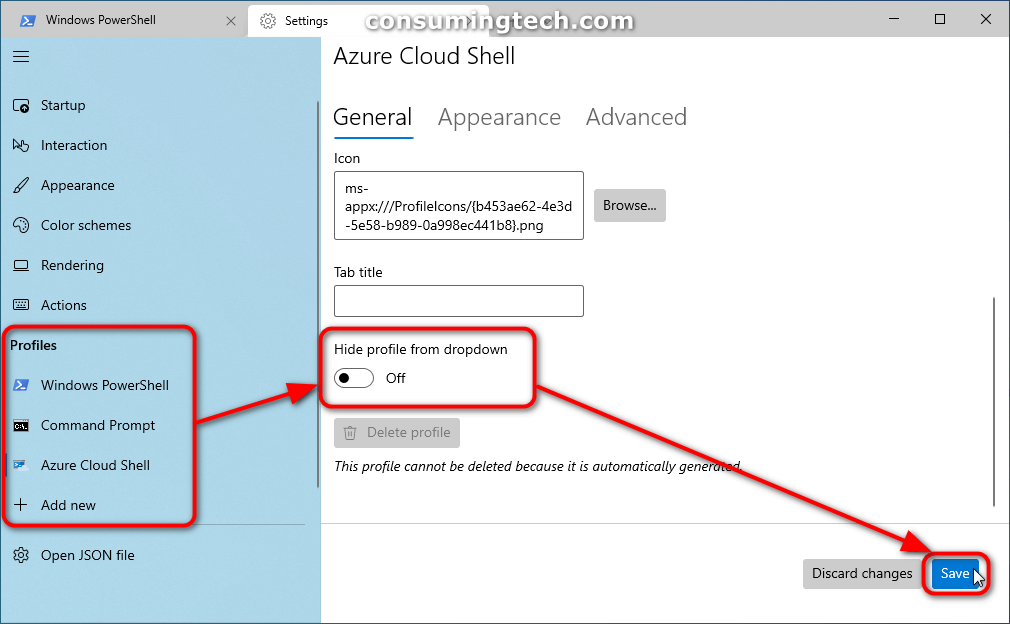 In conclusion, that is how to hide and show profiles from the dropdown menu in the Windows Terminal app in Windows 10.

Mathew is a qualified Microsoft Windows systems administrator (MCSA) who has covered OSs, browsers, the internet, and related tech since 2011. He is the founder and editor of ConsumingTech.com and is a freelance tech writer for various publications around the Web. Mathew graduated from DDLS Melbourne (now Lumify). He grew up in Melbourne and lives in rural Victoria, Australia. Read Mathew's full biography. Mathew's social profiles: Twitter, Facebook, Mastodon, Instagram, LinkedIn, and Github.
« Change Tab Width Mode in Windows Terminal App in Windows 10» Add/Remove Profiles in Windows Terminal App in Windows 10