Windows 10 includes many different backup and recovery tools. We won’t run through them all here in detail, but the list includes File History, Backup and Restore (Windows 7), OneDrive, and System Images for backing up, plus System Restore, Advanced Startup Options, Recovery Drive Creator, and Reset This PC for the recovery side of things.

The list is an extensive one and is about as much as anyone could ask for out of Windows. The problem, if there were to be one, would be that some of the tools aren’t that great. From what we can gather, it doesn’t appear as though Microsoft has developed their system image backup part of the Backup and Restore feature that came over from Windows 7, and as such, taking the system image backups using this tool isn’t as good as it might have been. Plenty of third party developers have capitalized on creating businesses for themselves that purely focus on creating better system image backups that what Microsoft has on offer in Windows 10.

Insert Macrium Reflect: probably the best of the bunch when it comes to third-party programs available out there for taking system image backups, and, without question, better than what Microsoft offers at the moment.

When you use the built-in Backup and Restore tool available from the Windows 10 Settings application, it’ll give you the option to choose between letting Windows choose what needs backing up or for you to choose only the parts you want backed up. When you opt for choosing what to back up manually yourself, you’ll see different checkboxes available to backup your stuff and then another checkbox underneath the others for choosing whether or not you want it to be backing up the system image as well.

If you choose to take the system image snapshot, then you can expect the backup to take up a considerable amount of more space. That’s because a system image is taking a snapshot of the entire operating system and is the ultimate way to take backups, so you get absolutely everything back the exact same way it was when you restore the computer. Nothing will be missing from the backup at all.

It’s best to take system image backups with an external hard drive and not just expect to fit it all on a USB thumb drive for that reason. A regular backup, on the other hand, can still take up lots of space but will mainly just copy the files only—like the stuff you have in your File Explorer libraries, for example.

A heck of a lot of users out there don’t make any changes to the Windows operating system and wouldn’t even have a clue what we are talking about when we say “customizing the operating system” and perhaps don’t even know it’s possible to do things like move the tiles around from the Start menu to better suit their needs. So choosing what option to take when backing up will come down to how much space you want that backup to take and whether or not you’ve done customizing since you started using it and whether or not you are willing to risk those changes you’ve made to the system—if there are any.

How to Backup and Restore System Images Using Control Panel

You’ll then see the “Create a system image” link available from the left side of the next window that you need to click. 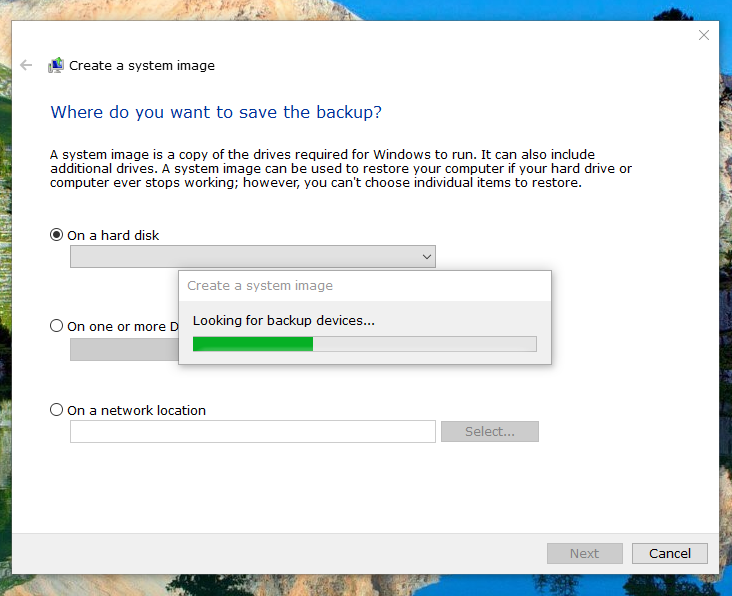 You are now at the beginning of your system image creation. You need to choose how you want to back up the system image: whether it be on your hard drive that you have already, by using a DVD/external drive or using a network location. (We recommend choosing your external hard drive. Using a network location isn’t an option for most people and using the hard disk means you won’t be able to restore it if something goes wrong with the hard disk. Backups should always be offsite whenever you can do it, so the external drive is the best option to take.)

Once you’ve chosen where you want to save the backup, click on the “Next” button. 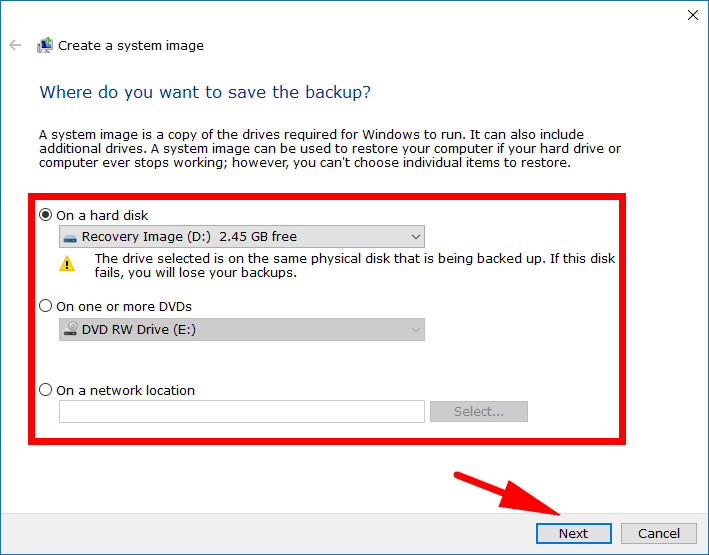 How to Backup and Restore System Images from Settings App

It’s also possible to backup and restore system images from the Settings application. Just open the Settings app and then navigate to the Update and Security > Backup and click on the “Go to Backup and Restore (Windows 7)” and it’ll direct you through to the same area as the Control Panel where you can then choose the backup devices for taking the backup. 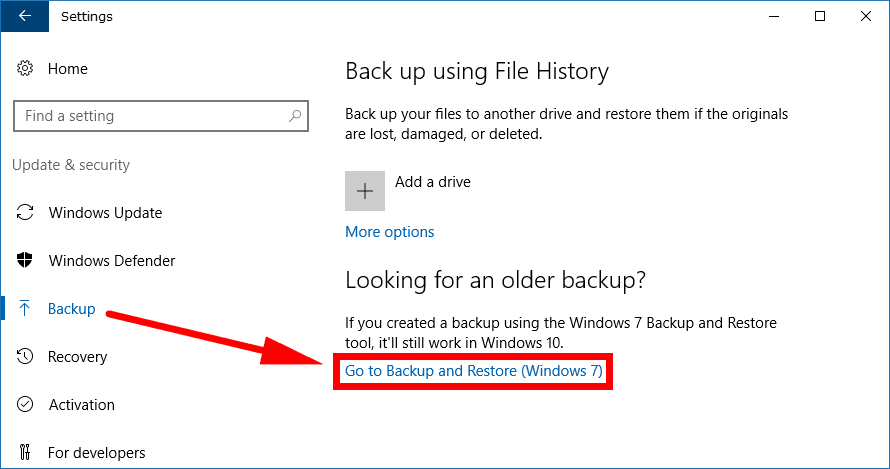 System image backups aren’t made to be for everyone. They aren’t meant to be the number one choice for the average user to backup with because of the sheer size of the data required to back up all of the system files that are involved in a system image backup. It’s not uncommon for these system files to take into the 10’s of GB’s of space on your external storage, hard drives or CD’s that you are backing up to. A regular backup takes up much less space and will only backup all the things of importance, such as your documents and general files.

A system image also isn’t as important as they used to be now that Windows 10 comes with a convenient reset button from the Settings application. All you need to do now is head to the Start menu > Settings > Update and Security > Recovery and then you have the options for resetting the PC in the right side pane. Performing a reset such as this is all you need to get the computer’s operating system and software back to its initial state. Then you can just restore your backup to get the files back over the top of the reset operating system. That kind of luxury wasn’t available in earlier versions of Windows. The chance to reset the PC from the Settings app is arguably more convenient than taking a factory reset from the recovery mode of a mobile operating system, and those were a blessing when they became available during the smartphone boom years of the last decade.

Mathew is a qualified Microsoft Windows systems administrator (MCSA) who has covered OSs, browsers, the internet, and related tech since 2011. He is the founder and editor of ConsumingTech.com and is a freelance tech writer for various publications around the Web. Mathew graduated from DDLS Melbourne (now Lumify). He grew up in Melbourne and lives in rural Victoria, Australia. Read Mathew's full biography. Mathew's social profiles: Twitter, Facebook, Mastodon, Instagram, LinkedIn, and Github.
« Open Power User Menu in Windows 10» Show/Hide Folder Merge Conflicts in Windows 10