Starting from Windows 10 build 21337, the Windows Terminal app is available as a default app, meaning it’s already installed on your Windows computer. These default apps are referred to as Inbox apps for Windows 10 and include other apps such as the Camera, Photos, Alarm and Clock, Feedback Hub, Tips, Mail and Calendar, et cetera.

An example of the “Open in Windows Terminal as administrator” option from the context menu:

The following tutorial demonstrates how to add and remove “Open in Windows Terminal as administrator” from a context menu when you are using a version of the Windows 10 operating system.

1. Download the Windows Registry file of your choice from the links below:

2. Save the Windows Registry file to the desktop of your computer or open the download location (i.e., Downloads folder in File Explorer).

3.Double-click on the Windows Registry file to merge it with your software.

4. If you get a security earning dialog box, click on the Run button. 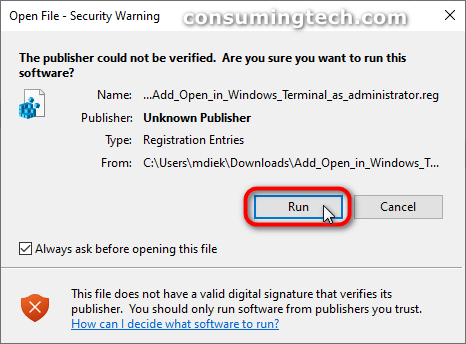 5. If you get prompted by User Account Control, agree to the necessary permissions by clicking on the Yes and OK buttons.

6. When you see message from registry Editor asking if you want to continue, click on the Yes button.

7. When the Registry Editor lets you know the keys and values have been added successfully to the registry, click on the OK button.

8. If you ever wish to undo the changes, you can download the following Windows registry file instead:

In conclusion, that is how to add and remove “Open in Windows Terminal as administrator” from a context menu in Windows 10.

Mathew is a qualified Microsoft Windows systems administrator (MCSA) who has covered OSs, browsers, the internet, and related tech since 2011. He is the founder and editor of ConsumingTech.com and is a freelance tech writer for various publications around the Web. Mathew graduated from DDLS Melbourne (now Lumify). He grew up in Melbourne and lives in rural Victoria, Australia. Read Mathew's full biography. Mathew's social profiles: Twitter, Facebook, Mastodon, Instagram, LinkedIn, and Github.
« Change Default Profile in Windows Terminal App in Windows 10» Enable/Disable Windows Terminal Always On Top in Windows 10