How to Change Microsoft Edge Theme in Windows 10 [Tutorial]

Microsoft Edge is a cross-platform web browser developed by Microsoft. It was first released for Windows 10 and Xbox One in 2015, then for Android and iOS in 2017, for macOS in 2019, and as a preview for Linux in October 2020. Edge was initially built with Microsoft’s own proprietary browser engine EdgeHTML and their Chakra JavaScript engine, a version now referred to as Microsoft Edge Legacy.

The Chromium version of Edge, often just referred to as the “new Edge” now, has replaced the Legacy version since March 9, 2021, when it was discontinued for good. This is most certainly for the better as the new Edge is an obvious choice over the Legacy variant. Edge is now a lot like Chrome. That is a good thing because Chrome was the undisputed king of web browser performance. We don’t use Edge as much as the Chrome we have bonded with for so long now but still do use it as a secondary browser and almost daily.

If you use a laptop or any device that relies on battery power at times, you may prefer browsing as much of the Web as possible in a Dark Mode to save power (since light colors require more light and thus power to light them up). Sadly, there is no way to turn the entire Web into a Dark Mode, but you can at least turn your browser into one, and then the browser will give you the dark theme whenever possible, which is nearly just as good. Note that Microsoft refers to the Dark Mode in Edge as the dark theme; there is no difference between these things apart from the terminology.

The following tutorial demonstrates how to switch between the light and dark themes in Microsoft Edge.

You can change between light and dark themes from the Microsoft Edge settings. Here are the more precise instructions:

1. Open the Microsoft Edge browser by clicking on its icon in the taskbar, on the desktop, or in the Start menu. 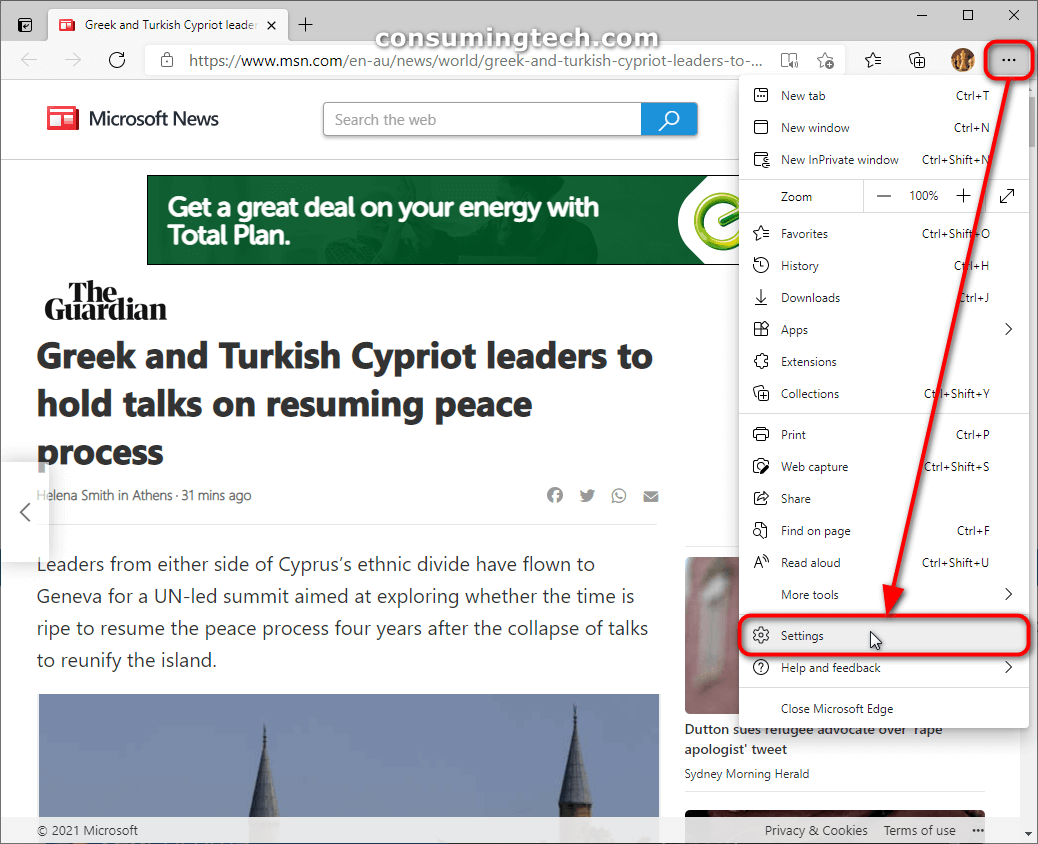 3. If you want the light theme: Ensuring the browser window is expanded large enough, click on Appearance under the left Settings menu and then from the right side of the same window look under the Customize browser heading for the Default theme drop-down menu where it will currently be set to System default and change it to the Light theme. This ensures the light theme will always remain light regardless of what Microsoft chooses in the future as its default theme. (Click to enlarge the screenshot below.)

4. If you want the dark theme: Ensuring the browser window is expanded large enough, click on Appearance under the left Settings menu and then from the right side of the same window look under the Customize browser heading for the Default theme drop-down menu where it will currently be set to System default and change it to the Dark theme. (Click to enlarge the screenshot below.)

In conclusion, that is all you need to switch between the light and dark themes in Microsoft Edge.

Mathew Diekhake is a certified Microsoft Systems Administrator from Australia and also the founder and editor of ConsumingTech.com. With a never ebbing desire to cover technology, he is mostly consumed by Windows, Linux, and Android. However, he has spent stacks of hours learning about a variety of computer software, both formally and informally, and has authored tens of thousands of tutorials and news articles since 2011. Mathew has obtained many Microsoft certificates and is a qualified sysadmin (MSCA). Read Mathew's full biography. Mathew's social profiles: Twitter, Facebook, Instagram, LinkedIn, Github
« How to Force System UI Language as Display Language in Windows 10 [Tutorial]» How to View Microsoft Edge Downloads in Windows 10 [Tutorial]