The taskbar is your gateway to using the Windows operating system. From the taskbar is where you’ll find access to the Start menu which offers many ways to branch out and explore the rest of the operating system, including getting access to File Explorer and the Settings app, plus the list of All Apps and Start menu tiles. The taskbar also shows you applications that you have open so you can switch between different apps without having to close them, and a few default apps that Microsoft thinks you may frequent which are pinned to the taskbar. You also have the option to customize the taskbar by pinning your choice of applications to it instead. The taskbar is also home to the notification area, known as the system tray in earlier versions of Windows, which shows you other useful app icons that give you direct access to opening apps and receiving notifications from them. Windows Defender is an example of an application that you will find available from the notification area.

Another feature the taskbar has on offer to its users is toolbars. By default, the Windows 10 taskbar has three toolbars: the Address, Links, and Desktop toolbars. However, you can also create new toolbars if you wanted to have something extra. A toolbar that is commonly installed after setting up Windows 10 by users is the Quick Launch toolbar—a toolbar that was available in earlier versions of Windows but has been left out of Windows 10.

The following tutorial demonstrates how to add or remove the Quick Launch toolbar to the taskbar when you’re using a version of the Windows 10 operating system.

How to Add Quick Launch Toolbar to Taskbar in Windows 10

Here is how you can add the Quick Launch toolbar by creating a new toolbar from the taskbar right-click menu in Windows 10:

1. Right-click a spare space on the taskbar where there are no icons and then hover the cursor on Toolbars followed by New toolbar. (click to enlarge screenshot below) 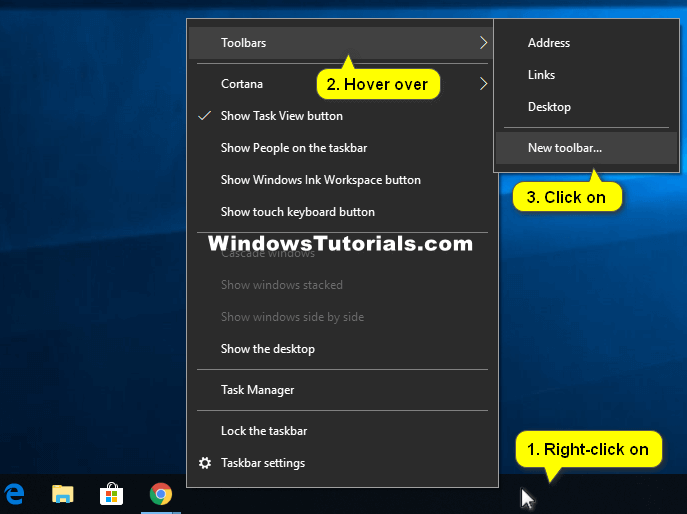 2. Type %UserProfile%\AppData\Roaming\Microsoft\Internet Explorer\Quick Launch into the Folder field at the bottom of the window and then click Select Folder. (click to enlarge screenshot below) 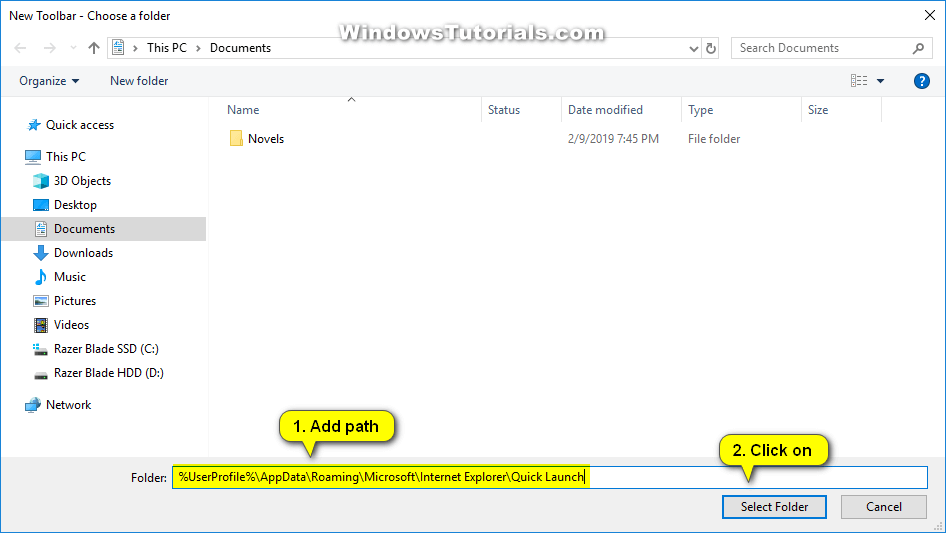 3. You will see the Quick Launch toolbar now available next to the notification area on the taskbar.

4. How to Move Quick Launch Toolbar

Note: You’ll need to unlock the taskbar for this to work.

How to Remove Quick Launch Toolbar from Taskbar in Windows 10

Here is how you can remove the Quick Launch toolbar from the taskbar right-click menu in Windows 10:

1. If you want to restore the Quick Launch toolbar to its default settings, which is to have it removed, then you can do that from the taskbar as well.

2. Right-click a spare space on the taskbar where there are no icons and then hover the cursor on Toolbars and then click on Quick Launch to remove the tick. (click to enlarge screenshot below) 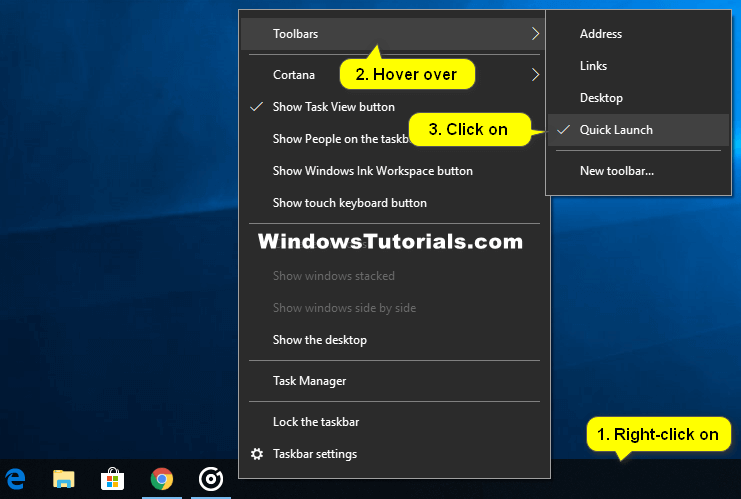 Mathew is a qualified Microsoft Windows systems administrator (MCSA) who has covered OSs, browsers, the internet, and related tech since 2011. He is the founder and editor of ConsumingTech.com and is a freelance tech writer for various publications around the Web. Mathew graduated from DDLS Melbourne (now Lumify). He grew up in Melbourne and lives in rural Victoria, Australia. Read Mathew's full biography. Mathew's social profiles: Twitter, Facebook, Mastodon, Instagram, LinkedIn, and Github.
« Run Files in File Explorer as Administrator» Change Startup Page in Google Chrome for Windows