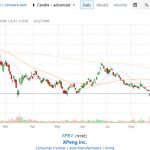 It’s not easy right now to pick Chinese stocks given the negative sentiment by the capitalists surrounding the ruling Chinese Communist Party. But we’re starting to see prices and circumstances that might signal some buying points.

Xpeng has fallen to nearly 4 times under its 200 SMA. Michael Burry came out recently and hinted the stocks that are not yet under their 200 SMAs are still likely to fall.

Burry also said that Chinese stocks are having an “America in early 2009” moment, and if you look at the S&P500 in early 2009, it was the beginning of the new bull market. Moreover, Burry tweeted this roughly six weeks ago now and Chinese stocks have only continued to fall since then, many of them considerably lower.

In our last Xpeng post on October 25, we suggested the stock looked attractive, but you can see in the chart that there were not many green buying days yet. However, if you look at the chart in this post, you will see that 6 of the last 8 days have been green days, signaling demand coming in at this price and validating our original thought of it being an attractive buy. Since the price is still at $6.62 at the closing bell today, it hasn’t moved much off the bottom, and the risk-reward becomes more attractive than back on October 25.

Many retail investors are too scared to enter the Chinese market because they fear that American fund managers are going to continue to sell those stocks. However, if Michael Burry, a staunch right-wing neo-con fund manager, says Chinese stocks are potentially close to bottoming, it might give you more confidence in entering at least some of the most attractive Chinese stocks such as Baidu and Alibaba. If you believe in EVs, you might also want to add Xpeng and Nio to that list.

Mat Diekhake is the editor of ConsumingTech.com. He has been inseparable from the internet since Web 2.0 in 2005, and by 2008 decided on a career in IT. With a never-ebbing desire to cover technology, he spends most days consumed by Windows, Linux, and Android in particular. Though he has spent innumerable hours learning consumer software in general, formally and as an autodidact, and has personally authored over 10,000 articles since 2010. He is a qualified Microsoft Windows systems administrator (MSCA). Read Mathew's full biography. Mathew's social profiles: Twitter, Facebook, Instagram, LinkedIn, and Github.
« Weak Nasdaq Rally Could Fall into Closing Stages of Bear Market – Oct 28, 2022» Google Insider Transactions up 20.99% – Nov 1, 2022