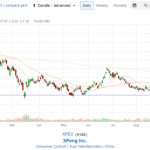 Xpeng sold off today to as low as $6.44 on the news that Xi Jinping will remain in power at the Chinese Communist Party for a third term. It has also been suggested that Xi Jinping has more people who follow his ideology of “common prosperity” in his political party than ever before.

Many Chinese stocks sold off today. The most attractive of them for investors are Alibaba, Baidu, Nio, and Xpeng. We had recently sold out of Chinese EVs entirely due to president Biden setting new rules in 2023 regarding the sharing of AI and semiconductor technology with China. However, we since had opened positions in Baidu that do not seem reliant on US technology in any way.

Given that China does have Baidu and Samsung with considerable technology to be used in AI and semiconductors already, and given how low a stock like Xpeng has sold off today, we have begun opening positions in Chinese EV stocks again.

Xpeng sold off to as low as $6.44 and closed the day at $7.16, which means it is well under three times its 200 SMA. Most asset managers who believe we are in a cyclical bear market suggest staying away from stocks that have not yet gone under their 200 SMA. That means if China remains some form of capitalism and allows companies to continue to grow in markets, stocks like Xpeng are in deep value territory.

Mat Diekhake is the editor of ConsumingTech.com. He has been inseparable from the internet since Web 2.0 in 2005, and by 2008 decided on a career in IT. With a never-ebbing desire to cover technology, he spends most days consumed by Windows, Linux, and Android in particular. Though he has spent innumerable hours learning consumer software in general, formally and as an autodidact, and has personally authored over 10,000 articles since 2010. He is a qualified Microsoft Windows systems administrator (MSCA). Read Mathew's full biography. Mathew's social profiles: Twitter, Facebook, Mastodon, Instagram, LinkedIn, and Github.
« Nio Dips to $8.43 on Xi Jinping News – Oct 25, 2022» Baidu Falls to $73.88; is 50% Down in 2 Months – Oct 25, 2022