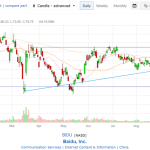 Whoops . . . I recently said I liked Baidu at $92. Under a week later it has fallen to $73.88 before closing today at $79.75. The fact that Baidu did bounce back today quite quickly suggests this stock won’t stay down this low for long. We can see that a lot of demand came in at the bottom of today’s price which suggests many buyers who are not willing to see it stay that low [strong demand]. Nevertheless, I certainly wasn’t expecting to see Baidu at $73 ever again.

Countless Chinese stocks dropped roughly 20% today on the back of the news that Xi Jinping would retain his presidency and bolster his own cabinet with more like-minded people. You have to be careful anytime there is a large sell-off but I can’t think of any reason why this sell-off won’t soon be considered an exaggeration.

As we approach the final stages of the bear market, you ought to be careful investing in any growth stocks that are not under their 200 SMA. Baidu is not only arguably a stock with too high of a market cap to be considered a growth stock, but it is also a long way beneath its 200 SMA, suggesting as long as China remains similar to what it has been over the past few decades, Baidu should be considerably undervalued. If there is one reason to not invest in Baidu today it’s that some analysts suggest China is in a serious depression and Baidu isn’t a stock that has as much growth potential as EV companies like Nio and Xpeng. However, to compensate, Baidu seems self-reliant on its own AI and semiconductor partnerships and technology that do not require the US companies in any way.

Mat Diekhake is the editor of ConsumingTech.com. He has been inseparable from the internet since Web 2.0 in 2005, and by 2008 decided on a career in IT. With a never-ebbing desire to cover technology, he spends most days consumed by Windows, Linux, and Android in particular. Though he has spent innumerable hours learning consumer software in general, formally and as an autodidact, and has personally authored over 10,000 articles since 2010. He is a qualified Microsoft Windows systems administrator (MSCA). Read Mathew's full biography. Mathew's social profiles: Twitter, Facebook, Instagram, LinkedIn, and Github.
« Xpeng Falls 3 Times Below Its 200 SMA – Oct 25, 2022» Indices Bounce; Keep Cyclical Bull Market in Tact – Oct 26, 2022