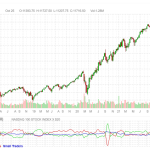 Today the indices bounced considerably. The Nasdaq rose 2.07% and the S&P was up 1.61%. According to some analysts, this was important for the overall cyclical bull market to continue.

We had experienced oversold positions in the indices and many individual stocks — both small and large cap — over the last few weeks. And some analysts had said if the market didn’t bounce from those oversold positions and continued to sell off that it would likely mean there would be no more cyclical bull market.

Fund managers such as Stanley Druckenmiller and Charlie Munger had suggested they don’t believe the market will be ahead of where it is today ten years from now, meaning they think we are in for a lost decade. Other technical analysts haven’t been so sure. As long as we rose from the oversold positions, witnessed over the last few weeks, the bull market could continue.

Fundamentally, we have expected the bull market to continue as Millennials continue to age into their prime earning years. However, due to government spending, some fund managers feared stock prices were too inflated to justify higher returns. We are currently in a bear market where stock multiples are rapidly declining.

Mat Diekhake is the editor of ConsumingTech.com. He has been inseparable from the internet since Web 2.0 in 2005, and by 2008 decided on a career in IT. With a never-ebbing desire to cover technology, he spends most days consumed by Windows, Linux, and Android in particular. Though he has spent innumerable hours learning consumer software in general, formally and as an autodidact, and has personally authored over 10,000 articles since 2010. He is a qualified Microsoft Windows systems administrator (MSCA). Read Mathew's full biography. Mathew's social profiles: Twitter, Facebook, Mastodon, Instagram, LinkedIn, and Github.
« Baidu Falls to $73.88; is 50% Down in 2 Months – Oct 25, 2022» Google Down 6.58% on Earnings Miss – Oct 26, 2022