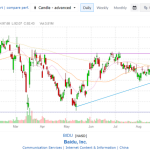 Many US asset managers are highly recommending Telsa at $206 since it has declined from its peak at $401. And it may well provide decent returns for investors, but its Chinese competitor Baidu is a better buy.

Many investors have lost confidence in Chinese stocks since president Biden added new sanctions on China that prevented them from using American semiconductor and AI technology starting in 2023. This has left many Chinese stocks having to either create the technology themselves or look elsewhere for new suppliers.

And it may well prove that China does already have a company capable of providing that AI technology which is Baidu. Baidu uses an affiliate company for its semiconductor chips called Kunlun. Baidu also has partnerships with Samsung for AI technology. Baidu has already started rolling out robotaxis in China, so we know it has already produced chips capable of powering robotaxi vehicles.

Baidu currently has a Buy rating on Zacks. Zacks gives Baidu an A for its Value score and a B for its VGM score.

Mat Diekhake is the editor of ConsumingTech.com. He has been inseparable from the internet since Web 2.0 in 2005, and by 2008 decided on a career in IT. With a never-ebbing desire to cover technology, he spends most days consumed by Windows, Linux, and Android in particular. Though he has spent innumerable hours learning consumer software in general, formally and as an autodidact, and has personally authored over 10,000 articles since 2010. He is a qualified Microsoft Windows systems administrator (MSCA). Read Mathew's full biography. Mathew's social profiles: Twitter, Facebook, Mastodon, Instagram, LinkedIn, and Github.
« Sellers in Control of Xpeng – Oct 6, 2022» Nio Dips to $8.43 on Xi Jinping News – Oct 25, 2022