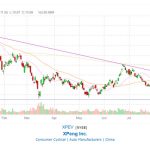 Who would have thought that after selling off to $10.99 that the sellers would still be in control of Xpeng? Yesterday, Xpeng dropped to new all-time lows. And yet the demand on the selling was also the highest we have seen out of any demand for Xpeng stock so far. Often this can mean that the selling isn’t done yet.

Xpeng reached new lows yesterday — $10.78 — before it closed at $10.99. Most people would never have thought a budding EV giant out of China could fall to a market cap of 7.15 billion, but it has. And investors need to be careful that it doesn’t continue to fall now that we have seen huge demand coming in and being won by the sellers. When this happens, it means the sellers are currently in control. And the higher the demand, the more intimidating that control is.

I wouldn’t have thought Xpeng could fall to have only a 7 billion dollar market cap given that it could reach a market cap over the next few years as high as Tesla. But it closed yesterday with a market cap of 7.15 billion — and that is at a time when strong demand was won by the sellers. Given we saw such high demand won by the sellers, it could sell off another 25% from its current price and head toward a market cap of 5 billion or less. If that happens, those who are not already invested stand to make a lot of money because it will certainly rise to have a market cap of 50 billion + for as long as it is a leading EV manufacturer.

Mat Diekhake is the editor of ConsumingTech.com. He has been inseparable from the internet since Web 2.0 in 2005, and by 2008 decided on a career in IT. With a never-ebbing desire to cover technology, he spends most days consumed by Windows, Linux, and Android in particular. Though he has spent innumerable hours learning consumer software in general, formally and as an autodidact, and has personally authored over 10,000 articles since 2010. He is a qualified Microsoft Windows systems administrator (MSCA). Read Mathew's full biography. Mathew's social profiles: Twitter, Facebook, Mastodon, Instagram, LinkedIn, and Github.
« Lyft Finds Bottom at $12.58 – Oct 4, 2022» Buy Baidu at $92 Instead of Tesla at $206 – Oct 21, 2022