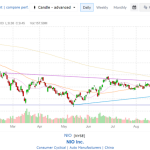 Nio had dipped to as low as $8.43 today following the news that Xi Jinping will retain his presidency and bolster his political party.

Who would have thought we would ever see Nio at $8.43 again? That’s how low the stock dipped today after markets heard of the news that Xi Jinping would continue being the leader of the Chinese Communist Party. Markets have long been wary about what Xi Jinping’s methods will be concerning obtaining “common prosperity.”

We bought Nio at around $9.00 today. Some analysts have suggested China is in a “great depression.” Even if that is true, we still anticipate rapid growth to occur in the EV sector right around the world and in China. China has two of the more formidable EV companies in Nio and Xpeng.

Tesla maintained a market cap of around 50 billion for many years before its rapid rise in 2020. As we approach 2023, Nio has a market cap of 17 billion while Xpeng has a market cap of 5 billion. As little as a week ago, I said I had sold out of Chinese stocks except for Baidu due to the AI and semiconductor laws coming into play in 2023 issues by President Biden. However, after this massive dip today on Xi Jinping news, I have started to buy small amounts of Nio and Xpeng again because I don’t know how much lower either stock can go from here even if they didn’t solve their semiconductor problems. Chances are they will solve their semiconductor problems though because Baidu has plenty of technology and partnerships with other companies like Samsung that can be shared.

Mat Diekhake is the editor of ConsumingTech.com. He has been inseparable from the internet since Web 2.0 in 2005, and by 2008 decided on a career in IT. With a never-ebbing desire to cover technology, he spends most days consumed by Windows, Linux, and Android in particular. Though he has spent innumerable hours learning consumer software in general, formally and as an autodidact, and has personally authored over 10,000 articles since 2010. He is a qualified Microsoft Windows systems administrator (MSCA). Read Mathew's full biography. Mathew's social profiles: Twitter, Facebook, Mastodon, Instagram, LinkedIn, and Github.
« Buy Baidu at $92 Instead of Tesla at $206 – Oct 21, 2022» Xpeng Falls 3 Times Below Its 200 SMA – Oct 25, 2022