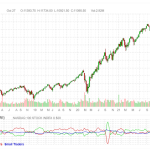 The Nasdaq was oversold at $10,545. It rallied to $11,738 and is now consolidating. If the consolidation breaks to the downside over the next few weeks and we reach new lows for the year, it could be the final stages of the bear market and the beginning of the capitulation in big tech that we have been waiting for.

The Nasdaq was likely going to bounce from its lows around mid-October because if it didn’t it would have meant the cyclical bull market would have been invalidated and the circumstances don’t warrant that to be the case. So what happens? Institutions come in with plenty of demand and help the indices rally from the oversold position. However, most institutions are still expecting the bear market downtrend to continue, meaning once the market had rallied from the oversold position, they would begin pulling their money out again and let the price fall.

It may take a few weeks, but once the technicals allow the market to drop without it being majorly oversold, we could then see the final capitulation phase of this bear market where the Nasdaq would likely fall to around $9,611 before the cyclical bull market takes over, signaling an end to the 2021/2022 bear market once and for all.

One of the reasons I think we are about to enter the final stage of this bear market is that many of the big tech stocks are now falling (see: Meta Platforms, Amazon) after weak earnings reports. The Nasdaq should fall along with these weak earnings. The bigger they are later they fall, so don’t panic if you are exposed to small tech stocks. If the end of the bear market is near, they have likely bottomed already.

Mat Diekhake is the editor of ConsumingTech.com. He has been inseparable from the internet since Web 2.0 in 2005, and by 2008 decided on a career in IT. With a never-ebbing desire to cover technology, he spends most days consumed by Windows, Linux, and Android in particular. Though he has spent innumerable hours learning consumer software in general, formally and as an autodidact, and has personally authored over 10,000 articles since 2010. He is a qualified Microsoft Windows systems administrator (MSCA). Read Mathew's full biography. Mathew's social profiles: Twitter, Facebook, Mastodon, Instagram, LinkedIn, and Github.
« Amazon Down 14.38% After Hours On Earnings Report – Oct 28, 2022» Xpeng Falls to Nearly x4 Under 200 SMA – Nov 1, 2022