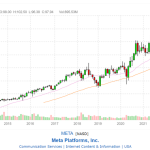 Meta Platforms closed the day down 24.56% after a weak earnings report showed unexpected spending on the metaverse.

During the current bear market, we had expected Meta to fall to roughly $116, where a specific level of support was for the Facebook and Instagram stock. Now that it has fallen to $97.94, we have started to buy in at this price.

Only 3 of the last 14 months for Meta stock have been green months during the bear market downturn of 2012/2022. And those 3 green months generally represent small bounces from oversold positions. It has been a terrible 12 months for Meta Platforms, but most of the downtrend should be over soon. We expect another bounce from this oversold position at $97.94; however, a worst-case scenario could still have Meta falling toward $76 over the next few months. A worst-case scenario is not what we’re predicting, however. We were surprised to see Meta fall below $100.

Meta wasn’t the only company to miss on earnings. Amazon has fallen a similar amount after hours today and is likely looking at suffering a similar fate to Meta once the market opens tomorrow. Don’t be surprised if Nvidia isn’t done falling yet as well. And we expect Microsoft to sell off similarly to what Meta and Amazon just did. Apple being more of a hardware company is more difficult to predict, but it likely isn’t done falling during this bear market yet either.

Mat Diekhake is the editor of ConsumingTech.com. He has been inseparable from the internet since Web 2.0 in 2005, and by 2008 decided on a career in IT. With a never-ebbing desire to cover technology, he spends most days consumed by Windows, Linux, and Android in particular. Though he has spent innumerable hours learning consumer software in general, formally and as an autodidact, and has personally authored over 10,000 articles since 2010. He is a qualified Microsoft Windows systems administrator (MSCA). Read Mathew's full biography. Mathew's social profiles: Twitter, Facebook, Instagram, LinkedIn, and Github.
« Enphase Up 3.21% on Earnings Beat – Oct 26, 2022» Amazon Down 14.38% After Hours On Earnings Report – Oct 28, 2022