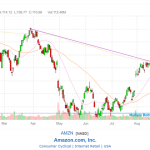 Amazon’s stock is down 14.38% after hours on a weak earnings report. It joins a list of big tech stocks plummeting toward what should be close to their bear market lows.

Meta Platforms fell 24.56% on an earnings miss being blamed on unexpected metaverse spending. But in reality, all big-cap tech stocks are now plummeting during this bear market which hints at a weakening economy that central banks are purposefully trying to tank in order to bring down inflation.

It’s hard to say how low Amazon’s price will fall; however, we don’t expect it to fall as far as Meta Platforms did. One of the reasons for that is that its stock was just in the midst of forming a strong multiple bottom. Multiple bottoms can certainly be broken, but they’re not typically broken by further large falls as much as 25% in as little as a few weeks. That being said, Jeff Bezos did sound quite bearish about his own stock several months ago once it had started to fall close to $100 in June and July, so it could be Bezos is still expecting a decline that could go considerably further than the $95 it is set to open at tomorrow.

Mat Diekhake is the editor of ConsumingTech.com. He has been inseparable from the internet since Web 2.0 in 2005, and by 2008 decided on a career in IT. With a never-ebbing desire to cover technology, he spends most days consumed by Windows, Linux, and Android in particular. Though he has spent innumerable hours learning consumer software in general, formally and as an autodidact, and has personally authored over 10,000 articles since 2010. He is a qualified Microsoft Windows systems administrator (MSCA). Read Mathew's full biography. Mathew's social profiles: Twitter, Facebook, Mastodon, Instagram, LinkedIn, and Github.
« Meta Platforms Falls 24.56% on Unexpected Metaverse Spending – Oct 28, 2022» Weak Nasdaq Rally Could Fall into Closing Stages of Bear Market – Oct 28, 2022