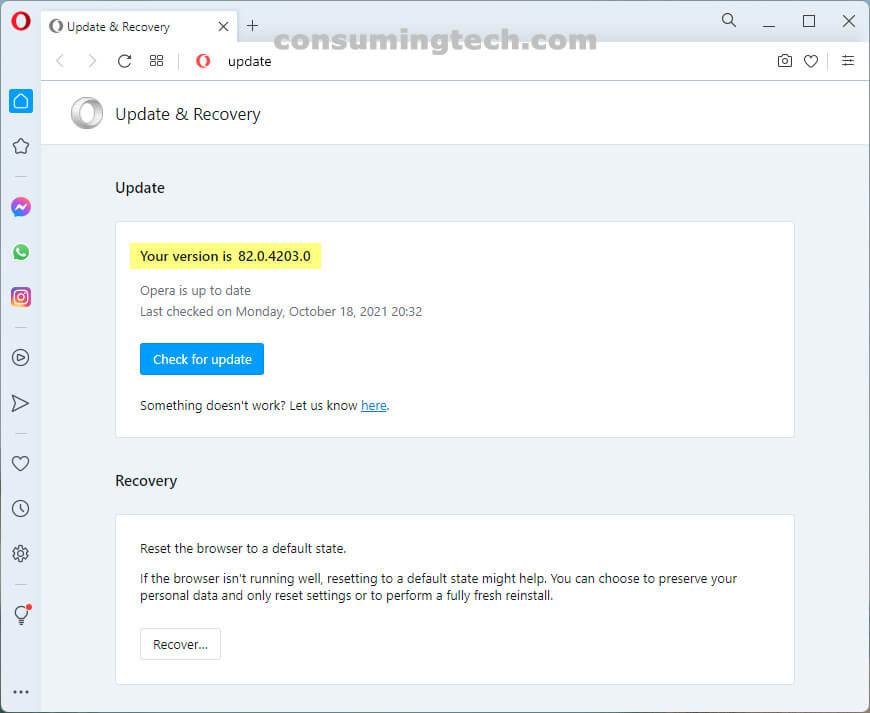 Opera Dev 82.0.4203.0 is the first release of the Opera 82 cycle. As such, it also comes with quite a few new features. Chromium has been updated to 96.0.4655.7; a favicon has been added to the detached Google Meet tab; Opera thinks they have come up with a way to better manage an expired bank card; there is a new flag for address bar dropdown categories, and much more which can all be read in the changelog below.

The official changelog provided by Opera regarding the 82.0.4203.0 release:

Some users have given some feedback regarding potential issues for this build. One person suggests that some parts of popup boxes are not as dark as others. (To me, this looks like a deliberate choice by Opera to help distinguish the two sections rather than it being a problem that needs addressing, though I can understand how some would prefer the entire screen being as black as the rest.) The same user has suggested another problem that definitely does exist, which is when hovering the mouse over some icons such as “Add to pinboard” the text changes size and the font adjusts itself unintentionally.

Another user has suggested that even when the crypto wallet is disabled via the settings that it still shows up in the sidebar.

Another user thinks he may have identified another problem with YouTube where if you view it in Picture-in-Picture Mode and increase the size of the video window, the full browser window may start flickering.

Mathew Diekhake is a certified Microsoft systems administrator from Australia and also the editor of ConsumingTech.com. With a never ebbing desire to cover technology, he spends most days consumed by Windows, Linux, and Android in particular; however, he has spent innumerable hours learning consumer tech software in general, formally and as an autodidact, and has authored tens of thousands of tutorials and news articles since 2011. Mathew has obtained numerous Microsoft certificates and is a qualified sysadmin (MSCA). Read Mathew's full biography. Mathew's social profiles: Twitter, Facebook, Instagram, LinkedIn, Github, Reddit.
« Edge Beta 95.0.1020.20 Brings Various Bug Fixes» Edge 96.0.1044.0 Released to Canary Channel