The taskbar is another place within Windows 10 that has its own context menu. It isn’t always just as simple as right-clicking on an icon from the taskbar, though. There is a bit more to it than that if you are going to become a taskbar context menu expert, and we suggest you should try to at least get accustomed to it on more than a novice level, because you probably could make use of some of these extra options that you might not have even known existed.

How to Open Immersive Context Menu for Taskbar Icons 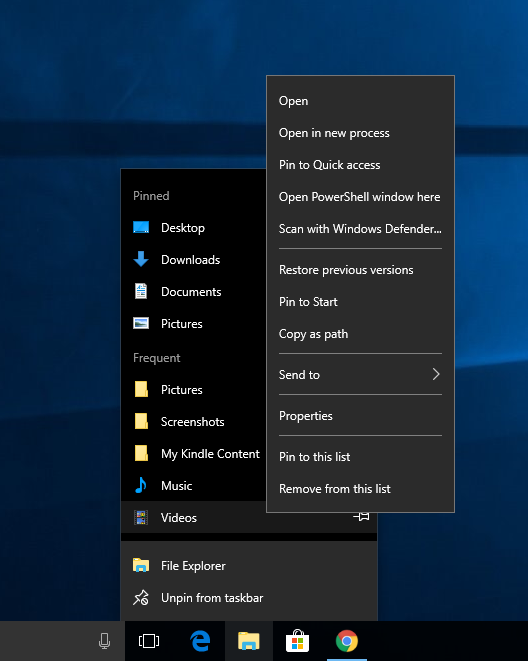 How to Open Classic Context Menu for Taskbar Icons

You can open the classic context menu, filled with just the basic links, from the taskbar icons as well. To get it open, hold down the Shift key first and then right-click on the taskbar icon that you want. If you were to hold Shift and right-click on the File Explorer icon, for example, you would get the same classic context menu that is pictured below.

You can open the same classic context menu from the section above but this time only by using the keyboard instead—that means navigating through the different names with the keyboard, too. To give it a try, press the Windows logo + T keys on your keyboard at the same time and then use the left and right arrow keys to toggle through the different taskbar icons. In the example below, after pressing the Windows logo + T keys, it has highlighted the Microsoft Edge browser icon, since it is the one that’s furthest to the left.

Clicking on the arrow on the keyboard then shifts it to the File Explorer. . . .

Then the Windows Store icon and so forth.

When you land on the taskbar icon that you want to use, press the Shift + F10 keys on the keyboard at the same time to get the classic context menu showing up for that particular icon.

The taskbar is one of the more fundamental places the Windows operating system has, having always been there ever since the early days, and is continuously used by people for better or worse. At the very least, people use the taskbar after opening files, applications or web browsers to help with their navigation. Being an area that is so routinely used, you might want to learn how to use the taskbar icon context menus, because not very many people even know they’re there at all and yet they do offer some useful features.

Mat Diekhake is the editor of ConsumingTech.com. He has been inseparable from the internet since Web 2.0 in 2005, and by 2008 decided on a career in IT. With a never-ebbing desire to cover technology, he spends most days consumed by Windows, Linux, and Android in particular. Though he has spent innumerable hours learning consumer software in general, formally and as an autodidact, and has personally authored over 10,000 articles since 2010. He is a qualified Microsoft Windows systems administrator (MSCA). Read Mathew's full biography. Mathew's social profiles: Twitter, Facebook, Instagram, LinkedIn, and Github.
« How to Add/Remove Locations for Search Index in Windows 10 [Tutorial]» How to Add/Remove “Manage” on “This PC” Context Menu in Windows 10 [Tutorial]