Mozilla Firefox 88.0 is now available to download and is also rolling out to computers over the next few days. As we write this, we don’t have it on our computers just yet but we do know of the new features regardless. The article will be updated with Firefox 88 screenshot and official changelog (also yet to be released) when we have them.

Firefox 88 is one of the rare updates where one of the main features is actually the removal of an old feature: FTP is no longer enabled by default. You can however enable it again still by setting the network.ftp.enabled option to true in about:config. We had been hearing for a long time that this day was coming (where FTP support would be dropped) and now it’s finally here. 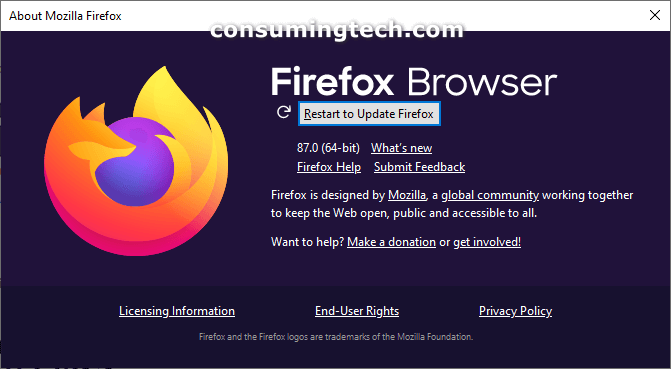 Nevertheless, some people are also raving about this update because of the features it does have and how they are generally moving Firefox in the right direction. Many people are becoming increasingly happier with the world’s leading open-source browser. The features being spoken about are as follows: Total Cookie Protection improvements, HTTPS only mode improvements, more oxidation with rust components, webrendering enabled for more devices, proton and non-native themes, ETP shims enhanced, super comprehensive network partitioning, more warp and stencil improvements, and fission moving along nicely.

Here are the release notes for Mozilla Firefox 88.0.

Mathew Diekhake is a certified Microsoft Systems Administrator from Australia and also the founder and editor of ConsumingTech.com. With a never ebbing desire to cover technology, he spends most days consumed by Windows, Linux, and Android in particular. However, he has spent innumerable hours learning consumer tech software in general, formally and as an autodidact, and has authored tens of thousands of tutorials and news articles since 2011. Mathew has obtained numerous Microsoft certificates and is a qualified sysadmin (MSCA). Read Mathew's full biography. Mathew's social profiles: Twitter, Facebook, Instagram, LinkedIn, Github
« Mozilla Firefox 87 is Now Available to Download» How to Add Create Elevated Shortcut to Context Menu in Windows 10 [Tutorial]