Mozilla Firefox has been updated to version 88.0.1. This update first rolled out to the Release channel on May 5. It comes with the following fixes listed after the jump. 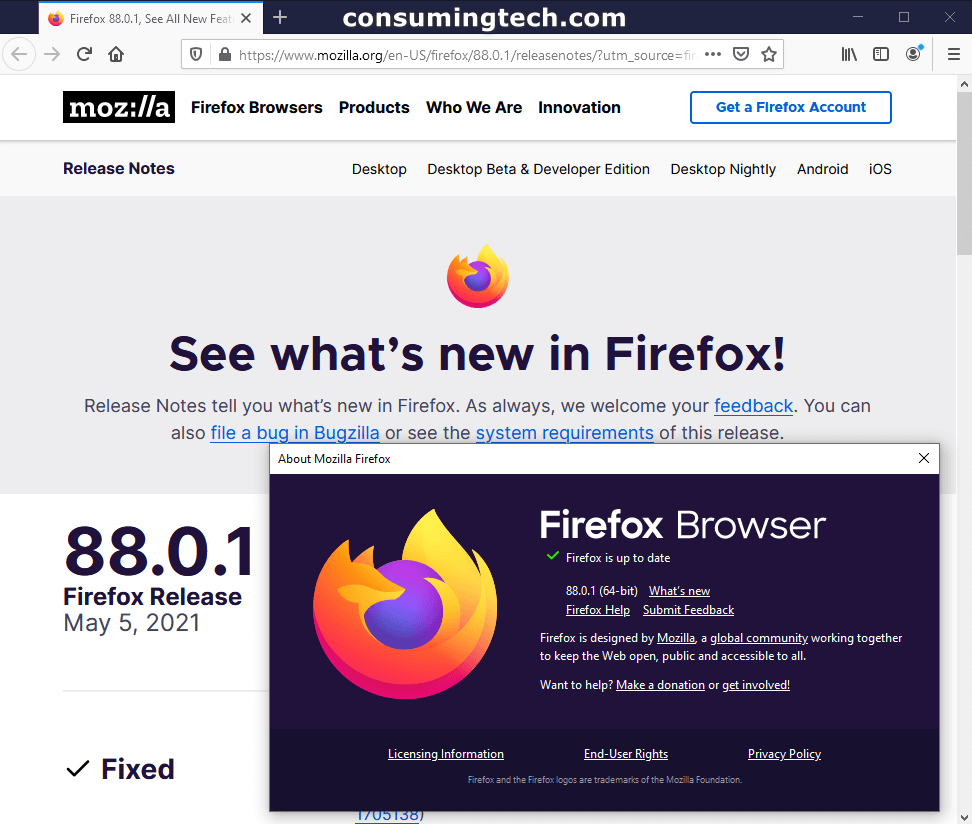 Here are the security changes:

A malicious webpage could have forced a Firefox for Android user into executing attacker-controlled JavaScript in the context of another domain, resulting in a Universal Cross-Site Scripting vulnerability.

Note: This issue only affected Firefox for Android. Other operating systems are unaffected. Further details are being temporarily withheld to allow users an opportunity to update.

When Web Render components were destructed, a race condition could have caused undefined behavior, and we presume that with enough effort may have been exploitable to run arbitrary code.

The same security updates have also rolled out to the Firefox Android browser.

The Firefox browser should update automatically the next time you open the browser. However, you can also download the update and install  it manually. Those who have the browser open already can open Firefox and navigate to Settings > Help > About Firefox and then check for the update from there.

Mat Diekhake is the editor of ConsumingTech.com. He has been inseparable from the internet since Web 2.0 in 2005, and by 2008 decided on a career in IT. With a never ebbing desire to cover technology, he spends most days consumed by Windows, Linux, and Android in particular. Though he has spent innumerable hours learning consumer software in general, formally and as an autodidact, and has personally authored over 10,000 articles since 2010. Microsoft awarded him numerous certificates resulting in him becoming a qualified Windows systems administrator (MSCA). Read Mathew's full biography. Mathew's social profiles: Twitter, Facebook, Instagram, LinkedIn, Github, Reddit.
« Microsoft Edge 90.0.818.56 Fixes Various Bugs and Performance Issues» Windows 10 Insider Preview Build 21376 Brings Updated Segoe UI Font