The heur trojan.win32.generic Trojan Horse may be either a script or Win32 platform. This one here is Win32 because it’s written in the name. The alternative would be listed as heur trojan.script.generic.

According to Microsoft, you can use Microsoft Defender to remove this Trojan Horse malware from your computer, so there is no need to install third-party programs. To run a scan with Microsoft Defender, type “Windows Security” into the taskbar search field, and click to open the app. Next, click Virus and Threat Protection > Scan Options > Full Scan. 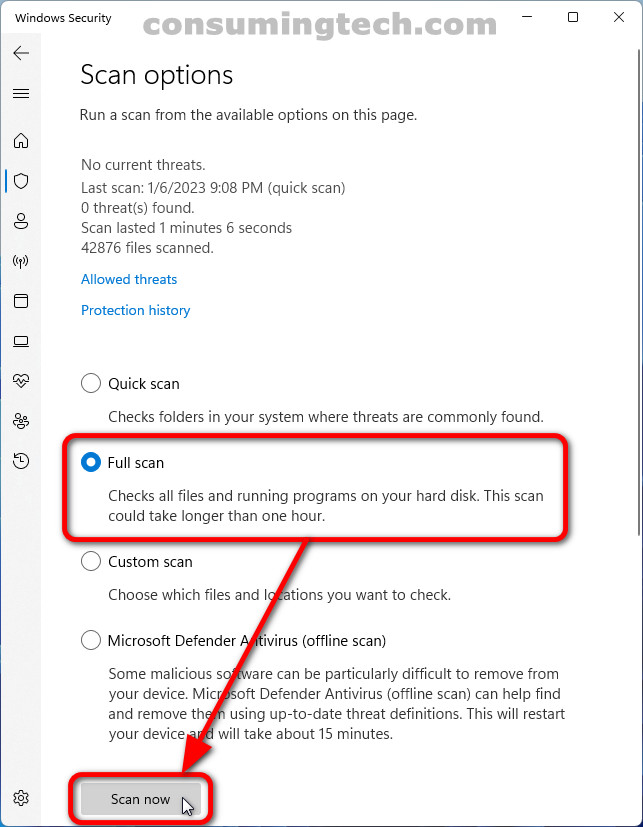 If you wanted a dedicated third-party antimalware tool to remove it, we recommend Spybot – Search & Destroy. We have used Spybot for decades and it always removes the viruses and malware we hope it handles. You can run free scans with Spybot. When you download the file and run through the setup wizard, choose to install Spybot without antivirus. This option allows you to install it for free and run an antimalware scan as soon as you open it.

In conclusion, all Trojan Horse malware have common paths. For instance, if it is a trojan designed to harm your computer, the path each one has is written as heur trojan.(platform-name).generic. That is how we identified the intentions behind this Trojan. We have read the Microsoft website and can see they are aware of this Trojan which is why it gets detected in a default Microsoft Defender scan. However, if you have already replaced Microsoft Defender with something else, it should detect the Trojan as well. We tested SpyBot which is a reliable antimalware tool, and it removed the heur trojan.win32.generic malware.

Mathew is a qualified Microsoft Windows systems administrator (MCSA) who has covered OSs, browsers, the internet, and related tech since 2011. He is the founder and editor of ConsumingTech.com and is a freelance tech writer for various publications around the Web. Mathew graduated from Lumify Melbourne in 2011. He grew up in Melbourne and lives in rural Victoria, Australia. Read Mathew's full biography. Mathew's social profiles: Twitter, Facebook, Mastodon, Instagram, LinkedIn, and GitHub.
« Is MP3juices.cc Safe» ‘Error While Installing Expecting Value’ on Mac