If you haven’t heard, Microsoft Edge isn’t doing so well in its infant stage of being the new default browser Microsoft promotes. Windows 10 isn’t doing great either, but that doesn’t mean it’s a bad operating system. Windows 10 is an outstanding operating system; people are just converting over to it very slowly. Like Windows 10, Microsoft Edge is also excellent. If you use it with Windows 10, you’ll find it loads quicker than any other web browser. It’s also very power efficient, so you’ll have a longer-lasting battery than if you were to use an alternative.

Still, people aren’t exactly flocking to use Microsoft Edge if web stats were anything to go by (and they are.) There are websites out there that track visits and what web browser the visitor was using during their time of visit. These stats are very reliable, so we have a pretty good idea how each web browser is going these days.

It wasn’t long ago Internet Explorer was the most used web browser in the world, but in recent times it’s taken a dramatic decline. Part of the reason is that Microsoft decided to go in a new direction and create a new web browser called Edge and Edge can only be used on Windows 10.

Many Microsoft enthusiasts enjoyed using the IE browser and still choose to use it today. But it’s also hard to argue that Edge isn’t better—Microsoft has been working on Edge a lot with the sole purpose of making it better than Internet Explorer.

Windows 10 is built on giving people lots of options—there are several options on how to do just about anything that is possible to do. It seems their patience is now running thin with converting IE users over to Edge, however, now that newer versions of Windows 10 are offering a new feature.

Starting with Windows 10 Insider Preview build 15002, Microsoft is now offering an Edge browser tab at the top of the Internet Explorer browser when you got to open a new tab in what appears to be an effort to almost force people into using Edge—or at least finally giving it a try.

The following tutorial demonstrates how to add and remove the “Open Microsoft Edge” tab when using Internet Explorer 11, the 11th and final version of Internet Explorer that is available in all versions of the Windows 10 operating system. 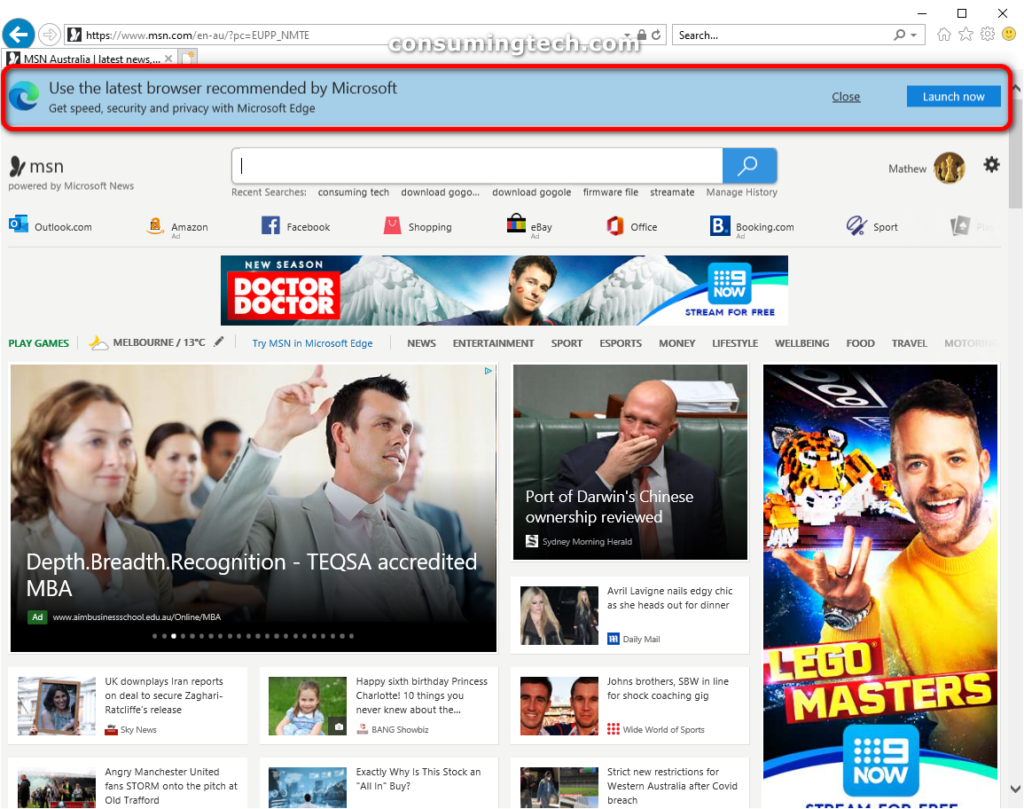 2. Click on the Tools button (Alt+X) in the top right corner of the browser window and then click on the Internet Options link. (Click to enlarge the screenshot below.)

In conclusion, that is how to add and remove the “Open Microsoft Edge” tab when using Internet Explorer 11 in Windows 10.

in Internet Explorer, Windows 10 No Comments

Mathew Diekhake is a certified Microsoft Systems Administrator from Australia and also the founder and editor of ConsumingTech.com. With a never ebbing desire to cover technology, he is mostly consumed by Windows, Linux, and Android. However, he has spent stacks of hours learning about a variety of computer software, both formally and informally, and has authored tens of thousands of tutorials and news articles since 2011. Mathew has obtained many Microsoft certificates and is a qualified sysadmin (MSCA). Read Mathew's full biography. Mathew's social profiles: Twitter, Facebook, Instagram, LinkedIn, Github
« How to Enable/Disable Extensions in Microsoft Edge [Tutorial]» How to Change Default Profile in Windows Terminal App in Windows 10 [Tutorial]