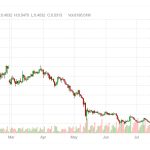 What was interesting about XRP’s rise during September to 0.5525 cents today is that it happened when Bitcoin and most of the crypto market were in a downtrend. We have not seen Bitcoin’s price rise during the last few weeks when XRP nearly doubled. That goes to show that individual cryptocurrencies can rise and fall and different times compared to Bitcoin.

XRP rose lately on the news that the CDC does not take any view on whether Ripple’s sales are security transactions. But given how speculative the news is surrounding XRP, its potential volatility going forward means if you missed the recent rise, you may want to look elsewhere for the next oversold cryptocurrency and just make sure you don’t sell too soon.

Mat Diekhake is the editor of ConsumingTech.com. He has been inseparable from the internet since Web 2.0 in 2005, and by 2008 decided on a career in IT. With a never ebbing desire to cover technology, he spends most days consumed by Windows, Linux, and Android in particular. Though he has spent innumerable hours learning consumer software in general, formally and as an autodidact, and has personally authored over 10,000 articles since 2010. He is a qualified Microsoft Windows systems administrator (MSCA). Read Mathew's full biography. Mathew's social profiles: Twitter, Facebook, Instagram, LinkedIn, and Github.
« Google Sits on Key Support Level – Sept 23, 2022» Carl Icahn Says Worst Is Yet to Come for Tech Stocks