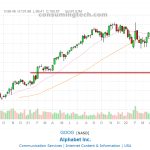 Like most small and large cap equities this year, Google is in the middle of a bear market downtrend. I had expressed optimism about a rally shortly even though the overall sentiment is still bearish. While I still feel that way, it’s important to understand where Google’s stock price sits because it’s at a very risky junction.

Google closed today at $100.57 which is the same level we saw during the beginning of 2021, during February, March, and April (pictured). That means this is the price that should provide a key level of resistance. But if it breaks through these levels, it could fall much further to the downside. I have explained why that is earlier today in the following post: Is This the Final Capitulation of the Bear Market? – Sept 23, 2022.

Likewise, if Google were to break through the support we’ve seen it hold since early 2021, it could then fall much further. I don’t think Google will fall an extra 20% from here even if the overall NQ does just because Google has such a bright future that has still been helped by the pandemic, but it could. Thus, this is a tricky time to be invested in the market. Many wise investors have at least some cash on the side or not in equities.

Mat Diekhake is the editor of ConsumingTech.com. He has been inseparable from the internet since Web 2.0 in 2005, and by 2008 decided on a career in IT. With a never ebbing desire to cover technology, he spends most days consumed by Windows, Linux, and Android in particular. Though he has spent innumerable hours learning consumer software in general, formally and as an autodidact, and has personally authored over 10,000 articles since 2010. He is a qualified Microsoft Windows systems administrator (MSCA). Read Mathew's full biography. Mathew's social profiles: Twitter, Facebook, Instagram, LinkedIn, and Github.
« Is This the Final Capitulation of the Bear Market? – Sept 23, 2022» XRP up 40% in September from Oversold Position – Sept 23, 2022