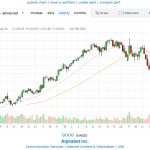 Google stock reached a new yearly low this week but bounced back slightly to close at $103.63 on Friday. I still expect the wider market downtrend to continue until further notice but short term it seems like the low is in and we are likely headed for another rally. If that does happen, Google is an attractive buy today for the next few weeks and potentially considerably beyond.

Google is attractively priced at 19.70 price to earnings and with a forward-looking 17.53 price to earnings. If the bear market continues, you could see these multiples drop down to at least 15. But that’s not a long way to fall and given how much growth Google could see in the coming decade, it’s possible its stock wouldn’t drop that low anyway. Google has driverless robotaxi services to be deployed around much of America over the next ten years. Google has benefitted from the work-from-home transition which isn’t likely to end. And never has the average person spent more time in front of a computer. Because Google’s advertising businesses encompass such a large area, even though many businesses catering to small niches are struggling, thanks to certain sectors that have boomed in recent years, it has meant that Google overall has still seen a lot of growth during the pandemic. I expect that growth to slow down, but I don’t expect much of a pullback in Google’s earnings. And though Google’s stock has risen a lot, it has only kept track of its earnings.

Google had 160.74 billion dollars in earnings in 2019. In 2022, that figure has risen to 256.74 billion in earnings. Now compare that to its stock price which was around $60 on average during 2019 with its price today of $103, and you can see it is priced appropriately. But what the current price doesn’t take into account is how much growth the company is still likely to have. Google did not predict a pandemic would come in 2020 when it had the $60 price in 2019. Now, with all the information we have, Google is an attractive buy.

Mat Diekhake is the editor of ConsumingTech.com. He has been inseparable from the internet since Web 2.0 in 2005, and by 2008 decided on a career in IT. With a never ebbing desire to cover technology, he spends most days consumed by Windows, Linux, and Android in particular. Though he has spent innumerable hours learning consumer software in general, formally and as an autodidact, and has personally authored over 10,000 articles since 2010. He is a qualified Microsoft Windows systems administrator (MSCA). Read Mathew's full biography. Mathew's social profiles: Twitter, Facebook, Instagram, LinkedIn, and Github.
« CleanSpark Sells off with Bitcoin but Is Still Attractive Buy – Sept 18, 2022» Zoom Could Be Very Attractive Long-Term Buy – Sept 18, 2022