Home » Finance » CleanSpark Sells off with Bitcoin but Is Still Attractive Buy – Sept 18, 2022

CleanSpark Sells off with Bitcoin but Is Still Attractive Buy – Sept 18, 2022 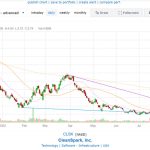 CleanSpark, the Bitcoin mining and energy company, sold off recently because Bitcoin broke a key technical level. However, it is an attractive buy at $3.47 for investors with at least a one-year time horizon because the technicals still suggest Bitcoin may have bottomed in June and still isn’t likely to drop down below $18,000.

What makes CleanSpark such an attractive buy beyond the fact that it is expected to follow Bitcoin’s general accumulation phase is that it added another 1.4 exahashes to increase its total hash rate capabilities to 4.5 exahashes and yet it only has a market cap of 190.70 million dollars. Compare that to Riot Blockchain, which has been swept up recently by many institutional investors, and CleanSpark is the much more attractive buy. Riot Blockchain has an almost identical total hash rate ability as CleanSpark but a market cap of 1.14 billion dollars.

The difference between CleanSpark and Riot Blockchain is that Riot is said to be using almost all of its available hash rate supply whereas CleanSpark is not. Nevertheless, it may not take long for CleanSpark to put all of its hardware to good use and mine as many Bitcoin as the hash rate will allow.

Mat Diekhake is the editor of ConsumingTech.com. He has been inseparable from the internet since Web 2.0 in 2005, and by 2008 decided on a career in IT. With a never ebbing desire to cover technology, he spends most days consumed by Windows, Linux, and Android in particular. Though he has spent innumerable hours learning consumer software in general, formally and as an autodidact, and has personally authored over 10,000 articles since 2010. He is a qualified Microsoft Windows systems administrator (MSCA). Read Mathew's full biography. Mathew's social profiles: Twitter, Facebook, Instagram, LinkedIn, and Github.
» Google Is an Attractive Buy Today for Short-Term Time Horizon – Sept 18, 2022