The end of Microsoft support for Windows 7 happened a few days ago, on January 14 (2020). As a final reminder to those still using Windows 7, Microsoft has sent out an upgrade warning.

The screen Windows 7 users will begin to see is titled “Your Windows 7 PC is out of support,” and it details how those machines will be more vulnerable to viruses and malware since no Windows developers are working on the operating system any longer. 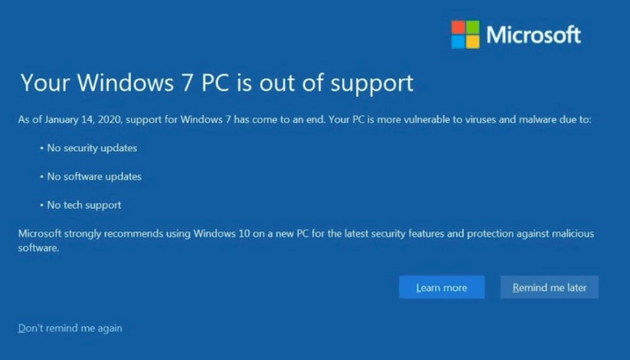 The full warning from Microsoft reads as follows:

“Your Windows PC is out of support,” states Microsoft’s full-screen alert. “As of January 14, 2020 support for Windows 7 has come to an end. Your PC is [now] more vulnerable to viruses and malware due to: No security updates, No Software updates, No tech support. Microsoft strongly recommends using Windows 10 on a new PC for the latest security features and protection against malicious software.”

The warning from Microsoft also notes that you won’t have any tech support available for the operating system either, as well as stating the obvious: there will no longer be any software updates for Windows 7.

It isn’t very easy for the average computer user to understand the importance of software updates. Any apps or programs you use need to be compatible with the operating system. As soon as the OS stops getting updated, you run the risk of programs no longer being compatible in a hurry—anywhere from a few weeks to a few months on average. This software phenomenon is universal among all computer software: the code that makes up the foundations of a website needs to be kept updated along with the programs the website uses to showcase features or else there would be incompatibilities fairly quickly there, too.

While many journalists report Windows 10 to be buggy still and riddled with problems—as well as consisting of a Windows Update feature you should not trust—we have no problem recommending our readers to upgrade immediately. We have been using Windows 10 for several years now and haven’t experienced any of the problems we read others writing about. Sure, we agree that some users somewhere around the world are probably experiencing what gets written, but the true statistics would reveal this is only happening to a small minority of users. What’s more, when we go back to Windows 7 on virtual machines, it’s clear Windows 10 is the superior operating system.

Mathew Diekhake is a certified Microsoft Systems Administrator from Australia and also the founder and editor of ConsumingTech.com. With a never ebbing desire to cover technology, he is mostly consumed by Windows and Android. However, he has spent stacks of hours learning about a variety of computer software, both formally and informally, and has authored tens of thousands of tutorials and news articles since 2011. Mathew has obtained many Microsoft certificates and is a qualified Systems Administrator (MSCA). Read Mathew's full biography. Mathew's social profiles: Twitter, Facebook, Instagram, LinkedIn, GitHub.
« How New Microsoft Edge Will Roll Out for Windows 10 Users» Windows 10 Mobile No Longer Supported By Microsoft